The Decatur House has a chilling history built on a foundation of bloodshed. Learn about the haunted side of Washington DC and book a ghost tour today! 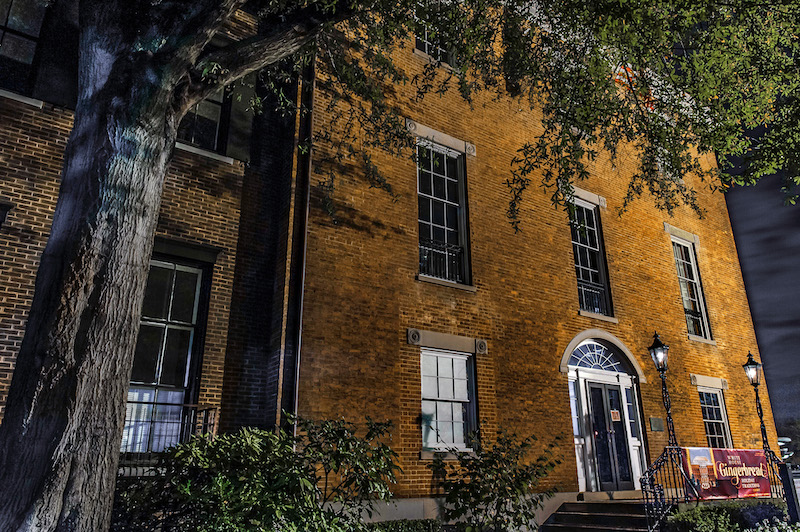 Decatur House is perhaps one of the most haunted buildings in Washington, DC, and it wouldn’t be a ghost tour if we didn’t include it. It has been the site of numerous sightings of ghosts with its long history of grudges and murder.

This house is the perfect setting for a horrifying experience. If you appreciate the haunted as much as the historical, book a tour with US Ghost Adventures. We will show you the gruesome underbelly of Washington DC.

Enemies With the Faces of Friends

The hauntings at Decatur House perhaps all started with the bloody end of the original owner.

The Decatur house was built in 1818 for national military hero Commodore Stephen Decatur. During this era, common disagreements often involved the bloodiest resolution: dueling. Decatur was challenged to one of these duels, and it did not end in his favor.

As famous and respected as Decatur was, this renown also brought multiple enemies. One such enemy was Commodore James Barron. The bad blood between the two naval officers went back decades, and the animosity between them was no secret in Washington.

Ultimately, Barron challenged Decatur to a duel. Due to the illegality of dueling within Washington at the time, the duel was to take place at the city limits.

Decatur was going to fail from the beginning. Per the dueling rules, both participants had to nominate a ‘second’ in case one of them became incapacitated. Unfortunately for Decatur, both of the seconds he chose had motivations to want him dead. Because of this, the terms of the duel were heavily stacked in Barron’s favor, which would ultimately contribute to his victory.

Decatur paid the ultimate price. A single bullet shattered his hip, and he bled heavily for a total of twelve excruciating hours before succumbing to his wounds at his home. He was mourned extensively, with his funeral being the most attended in the history of the capital.

However, it wasn’t to be the last time people saw Decatur. Passersby reported seeing the pained face of the executed Commodore in the windows of the property. These occurrences happened so frequently that the windows had to be boarded up with bricks to soothe the nerves of local citizens. Perhaps you, too, will see the grimacing expression of the late Decatur in the windows.

It is not solely Decatur that is said to haunt the halls of this home either. Charlotte Dupuy, a slave from the 17th century, is said to wander from room to room. She stays on begging for freedom that never came.

Many people have stayed at the home, so countless births and deaths likely occurred within these haunted walls. Why not meet them for yourself?

Named after George Washington himself, this city is one of the most visited cities worldwide, with millions of tourists every year. But not all these visitors get to know the shadowy past of DC. Our ghost tours in Washington DC delve deeper into the past than what’s on display, taking you behind the scenes of the darker secrets behind the grand capital.