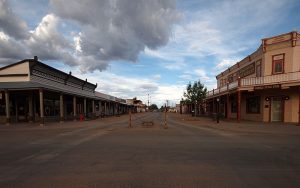 Tombstone, Arizona, is undoubtedly an iconic city in the wild west bursting with rich history and heritage. Not only was it a title from a movie where it featured the city’s culture and scene, but it also garnered attention from another thing — hauntings.

Settled on the far southeast end of Arizona, Tombstone is dubbed the most haunted place in the old west. It shouldn’t be much of a surprise due to its turbulent history of lawlessness and murders. Thus, this fact may have prompted a plethora of spirits to roam the city’s streets freely.

Read on to find out about the most haunted places in Tombstone.

The Old Kindersley, mostly known as the O.K. Corral, is haunted by the cowboys and law enforcement officers associated with the famous gunfight on October 26, 1881. The 30-second shootout was between the Earp brothers Virgil, Wyatt, Morgan, Doc Holliday, alleged cowboy outlaws Frank and Tom McLaury, Billy and Ike Clanton, Billy Claiborne, and Wes Fuller.

The shootout left three outlaws dead, Frank and Tom McLaury, and Billy Clanton. But the conflict didn’t end with that gunfight. Following that bloody incident, on December 8, 1881, the cowboys ambushed one of the Earp brothers, Virgil. On March 18, 1882, a cowboy killed Morgan while he was in a saloon.

However, contrary to popular belief and various portrayals in films, the gunfight didn’t transpire in the O.K. Corral. Instead, it occurred on Fremont Street, located at the west of the corral.

Sixteen years later, another apparition was sighted in the name of a James Burnett. He was nicknamed “Justice Jim” and was shot dead at the O.K. Corral. Burnett was also the Justice of the Peace in Pearce, Arizona, at the time of his death.

The O.K Corral was primarily built as a livery and horse corral at 308 E. Allen Street.

With a whopping 26 deaths, Bird Cage Theatre became one of the roughest late-night attractions in Tombstone. Located at 535 E. Allen Street, this establishment was a theater and a saloon, brothel, and gambling parlor.

Twenty-six people died of murder, suicide, and shootouts. One of the most famous murder cases was of the “Painted Lady” Margarita, who died in the most gruesome way possible. A stiletto punched through her heart.

Staff and even customers claimed that they have seen spirits of what may have been cowboys and prostitutes. In addition, there have also been cases of cigarette smoke in a non-smoking saloon and a phantom piano playing in the background. Bellowing laughter was heard even when the theatre was closed.

Some of these apparitions, which guests and staff have reported, were adorned with 1800’s clothing. It’s crystal clear that these phantoms who passed away a long time ago have been roaming the place where they last lived. They could not seem to move on from the fact that they are no longer alive.

Boothill Graveyard is the most famous cemetery in Tombstone, which is kind of ironic since the place is renowned for the dead. The name was derived from the fact that most of the corpses buried still had their boots on. As a matter of fact, Frank, Tom McLaury, and Billy Clanton, three of the outlaws, were buried in Boothill.

It isn’t Tombstone’s first cemetery, but it had the most ghost sightings, which shouldn’t be much of a shocker since we’re talking about a graveyard. Residents near the area reported ghosts on unmarked graves and strange sounds and lights coming from the cemetery.

The souls of the people who have been buried through time were stuck on an endless loop. It seems that they could never find peace where they were situated. Some were even in denial that they have departed from the world of the living.

There was one incident where a journalist heard a small, child-like voice that came out in whispers. He thought he just imagined things, yet it spoke again and bellowed. The journalist could not think straight, and all he could notice was an unmarked grave right where the voice was coming from.

The creepy cemetery was located north along Highway 80.

This historic building is brought to life by Al Shieffelin, brother of Tombstone’s founding father, Ed Shieffelin. The hall was initially built to cater to the artistic needs of the west and to drive culture. It has served as a luxurious opera house and theater as an alternative for respectable people who wouldn’t be seen in places like Bird Cage Theatre.

However, due to being abandoned for over half a century, paranormal activities started to take root. According to some residents, there were strange noises like chains dragging on the wooden floors. These noises can be heard on several occasions whenever Tombstone’s City Council meetings are held in the building.

Renée Gardner, who authored the book “Southern Arizona’s Most Haunted,” affirmed that the spirits that had been haunting the hall were its performers. She added that the presence was highly concentrated, mainly backstage, where the dressing room is. Reports of spectral phenomena only proved the stories true.

Considering Tombstone’s lawless past, it shouldn’t come as a surprise that many of the spirits who lost their lives anywhere near it chose to stay. One notorious ghost of the hall was believed to be the actress who once performed in it. This apparition is often seen donning a scarlet dress.

The Buford House was built in 1880 by George Washington Buford. Being a Texas mining executive, Buford was doing good in life together with his wife, Anne. However, they never expected the horrors that would soon come.

Three of their seven children succumbed to death. Some reports said that they died of an epidemic that engulfed the town. At the same time, some say that the first child bit the dust due to diphtheria, a disease that affects the mucous membranes of your nose and throat.

Over the years, the house was believed to host two sheriffs, a mayor, a senator, and even the famous actor, John Wayne. It became a home for many well-off families and even stood as a commercial enterprise such as a bed and breakfast.

However, those weren’t the only residents that the house catered for years. It is also believed to confine sinister spirits that prompted the once bed and breakfast to close permanently.

These spirits may have been the house’s previous owners and even considered it theirs even in the afterlife. There have been cases of manifestations and strange coincidences surrounding the haunted place.

Buford’s previous owner, Catherine Farrell claimed that she heard plenty of noises, most of which were shrill voices. She admitted that one night a cold hand touched her leg. This horrifying occurrence convinced her not to turn the lights off every night.

Daves was said to have an affection towards a woman named Petra Edmunds. However, Petra had someone in mind already. When Daves went home from work, he saw her with him and immediately felt devastated.

Due to his fury, he shot Petra twice and shot himself right after. Fortunately, Petra clung to life and soon recovered from her wounds. Daves, on the other hand, died of his gunshot.

According to previous owners, Daves still wanders around the house and even along the streets where he allegedly shot himself.

Considering the rich paranormal history of the house, it is not entirely surprising that paranormal enthusiasts frequent the place. It can be found at 535 E. Allen Street.

Seated at 417 E. Allen Street, at the ghost town of Tombstone, Big Nose Kate’s Saloon was once owned by Mary Katherine Harmony in the 1800s. At that time, it was known as the Grand Hotel, which entertained familiar personalities like the Earp brothers, the Clantons, and McLaurys.

However, that’s entirely not the reason why Big Nose Kate’s Saloon was popular. It is said that various specters of past locals still haunt the establishment. Even their official website made sure to incorporate the stories as part of its rich history and heritage.

According to Big Nose Kate’s Saloon’s official website, the most commonly sighted spirit was the ‘Swamper.” They said that the said specter isn’t planning to go anywhere and has been seen in various places in the bar, such as hallways, staircases, and the basement. Old legend and tales say that the “Swamper” returns to guard the silver he allegedly hid in the haunted place.

The Earp Brothers and Holliday

Various paranormal activities have been reported following a case of apparitions and beers getting knocked over. These spirits could be the Earps and Holliday, who used to frequent the place when they were still alive.

There have been cases where witnesses harped that they often heard singing and talking. It doesn’t help that strange occurrences like lights turning on and off on their own, doors opening and closing, and plates flying were also reported. Numerous staff also discovered certain cold spots in the saloon.

Owned by Big Nose Kate, the once brothel planted at the Red Light District of Tombstone was now a full-service bed and breakfast. It’s now two hundred feet from where it used to be and has been serving the town’s residents.

In the early nineteenth century, a miner allegedly died when a fight broke out behind the brothel. Today, it is common knowledge to the residents in the area that his spirit lurks in the house’s shadows. This miner is believed to have a particular affection towards female guests.

Guests and staff confirmed that they had seen a man in a duster and loose-fitting coat. A female specter has also been seen, which is believed to be one of the brothel’s ladies of the evening.

However, this doesn’t stop guests from coming to the now bed and breakfast. They said the sightings and appearances of these phantasms make the place even more interesting.