The history of Forepaugh’s 2nd mansion is shocking.  Discover more about it’s haunted history below. 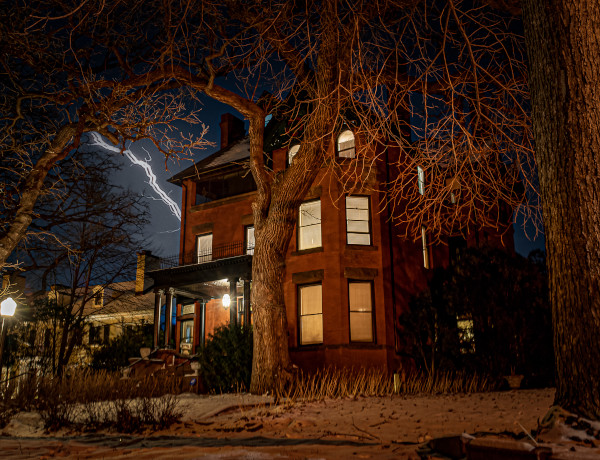 A beautiful red stone gem alongside the Victorian-style homes that line Minneapolis’ iconic Summit Avenue, the Forepaugh mansion appears like any other historic home to passerbys. But despite its innocent appearance, the history of this house is shocking. Entrepreneur Joseph Forepaugh found booming success as the biggest dry goods store in the Midwest before marrying his wife Mary in 1862 and having five children together. Rich in both the material and familial sense, no one could have predicted the dark turn their lives would take.

Because the Forepaugh’s three-story home was so large, the family hired staff to help take care of the property, including a young and beautiful Irish maid, Molly. Joseph noticed Molly’s beauty
and it is noted that other staff members saw Joseph and Molly sneaking around, or Joseph asking for Molly’s help with minuscule tasks.  Mary found out about her husband’s affair and gave Joseph an ultimatum—it was either her or the young maid—of course, Joseph chose his wife.  A few days later, Molly took her own life, tying a rope around the third-floor chandelier and the
other half around her neck before jumping to her death. There were rumors that she hung herself because she was pregnant with Joseph’s baby and because Joseph chose his wife over her.

At the age of 58, Joseph committed suicide in the woods near Selby and Hamline by shooting himself in the head. Though he left no note, it is speculated that his affair with Molly largely contributed to his declining mental health. In 1970, the home was rebuilt into a fancy French restaurant. According to patrons of the restaurant, there have been multiple sightings of both Joseph and Molly there.

Molly’s ghost is more of a prankster than Joseph’s ghost is, with one employee reporting that he left the mansion multiple times, only to discover lights having been turned on on multiple floors. Finally he said, “No more games Molly, I am tired and I want to go home,” and Molly obliged. Molly loved to attend parties and bridal showers and at one costume party, several employees saw her ghost walk through the hallways, then vanish into a wall. At bridal parties, she can be seen talking to guests about their upcoming wedding. In one photo, a mysterious-looking woman with dark hair, looking lovingly at something just outside the frame of the picture.

Joseph’s ghost frequents the mansion’s basement, insisting that lights always have to stay on or else he makes a huge mess.  Tables and chairs in the dining room are also found randomly rearranged.

Joseph’s ghost is often described as wearing a black waistcoat, silk vest, derby hat, and pinstriped trousers and has been seen rushing up and down the staircase. In one photo, he is seen touching a bride’s knee. This photo somehow mysteriously disappeared quickly after it was taken, most likely Joseph trying to hide his wandering eyes from Molly. 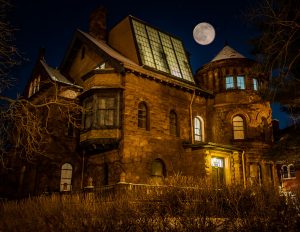 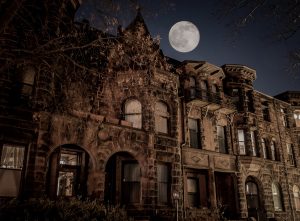