Spirits from prohibition’s past linger on at the Casablanca Inn. Experience the chills and thrills on a US Ghost Adventure tour of haunted St. Augustine. 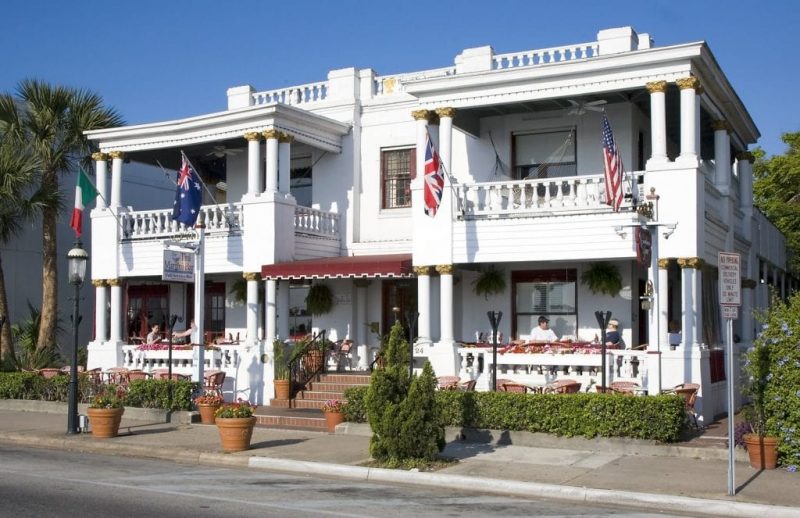 The Casablanca Inn was once a hotbed for illegal activity in the old city of St. Augustine. Brave locals and travelers alike who stay in this local establishment report unexplained happenings—do you dare to see for yourself?

US Ghost Adventures takes you on a tour of haunted St. Augustine. Here, you’ll discover the unexplainable events that have shadowed the Casablanca Inn over the years.

A Seedy Past of Struggle and Illicit Activity

Originally known as the Bayfront Boarding House, this large home overlooking the Matanzas Bay used to house families looking for a welcoming and safe place to stay or live. It also used to welcome traveling salespersons on the job.

Beloved for its service, cleanliness, and tasty food, the inn kept its owner busy. Yet, after the 1920s, she fell into financial hardship and struggled to keep her doors open.

She became tempted by the illegal bootlegging trade, helping smuggle alcohol into the city by the sea. She let bootleggers stay at her hotel, selling liquor (mainly Cuban rum) to her guests under the table.

While she was otherwise a compliant and law-abiding citizen, she couldn’t refuse this lucrative opportunity and chance to save her inn.

Though hounded by authorities, the innkeeper remained an active part of this illegal alcohol ring for many years without being caught. In her role, she would wait until the area was clear and would signal to the bootleggers that it was safe to bring in the cargo. Then, she would facilitate sales at her inn, giving her guests the illegal treat they sought.

Stuck in a Bygone Era

While some may feel uneasy about the presence of the beyond, most visitors to the Casablanca Inn today say that the hauntings are, for the most part, friendly. So, what will you see if you visit today?

Many visitors have reported seeing the woman who once owned and took great pride in her building. Some have caught her lantern waving in the window, signaling to the bootleggers that all’s clear. Others have heard footsteps down the hallway, only to find it empty.

The happenings aren’t all visual, either. Some have felt a misty fog floating through the building, lingering in certain spots, such as guest rooms and the outdoor space.

Yet, some reports seem to be of the boarding house before bootleggers overran it. Guests have seen and heard young children playing throughout the inn, though no children were nearby—and least, not any living ones.

Guests have even felt a welcoming hand on their shoulder in a few instances, despite being completely alone. Could it be the innkeeper? Some say it’s the building’s architect; some say it’s the spirit of a child who once lived there.

As one of the oldest cities in the United States, it’s not surprising that St. Augustine has so many secrets and lingering spirits.

The Casablanca Inn is just one stop on a journey to discover all the frights and fearsome happenings that await you in haunted St. Augustine. Book today to uncover its storied past.