An old hospital with a twisted past meets the burial ground of a native tribe at the Spanish Military Hospital in St. Augustine, FL. Learn more here. 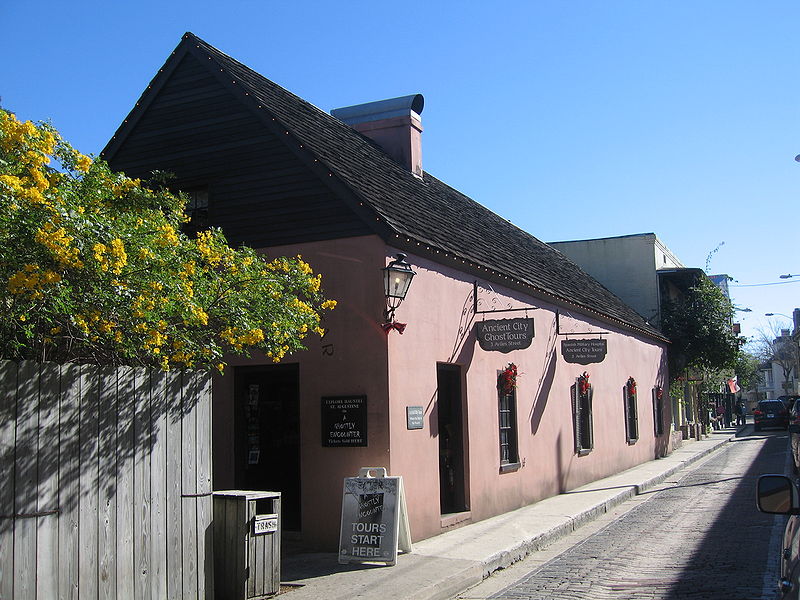 Originally known as Our Lady of Guadalupe, the Spanish Military Hospital was once used exclusively for military purposes. Here, doctors and nurses treated injured soldiers and experimented with new medical procedures.

An old hospital alone is enough to make some people’s skin crawl. But what happened here and later came to light adds to the fright.

Learn more about the hair-raising history of the Spanish Military Hospital on a tour of haunted St. Augustine. US Ghost Adventures shows you the historical and the haunted. You can decide for yourself whether it’s old wives’ tales or a waking nightmare.

The Spanish Military Hospital Museum is a replica of the hospital building that was there from the 1700s to 1821 when the city decided to tear down the building to make way for new water lines. The building was then rebuilt exactly in a slightly new location to replicate the same rooms and functions as the old one.

But workers couldn’t have anticipated that when they broke ground, it would unleash the vengeful spirits of the dead.

While workers were helping break down the old building and rebuild it, many reported the same thing. They said the building was frightening and evil. Something seemed off, and an inexplicable thing was roaming what used to be the hospital ward. Some even said they felt or saw something in the air that hung like dense fog or mist.

Most people would write this off as a side effect of tearing down an old hospital that has naturally seen many deaths, but upon further excavation, they made a chilling discovery.

There, beneath the original Spanish Military Hospital, were thousands of human bones.

Whose bones were they? At first, those who discovered the bones thought they were the Timucuan people, a group native to St. Augustine before Spanish settlers arrived.

More than 100 years later, in 1934, there was another discovery near the supposed Fountain of Youth. Here, it was confirmed, was the burial ground of the Timucuan tribe.

This new finding meant that the bodies found in 1821 beneath the hospital had to be those of another native tribe killed off by the Timucuan people long ago.

The spirit of these lost natives still lingers in an eerie presence on the property, where they mingle with the lost souls of the hospital.

Mourning at the Museum

Today, visitors touring the museum can watch live demonstrations of procedures once performed at the hospital. Many guests report that they can still hear cries, moans, and screams of the spirits of past patients.

These sounds are especially notable in the “Mourning Room,” where people and family would go before someone passed and a priest would give their blessing. Here, people have reported various sounds, unexplained moving objects, and even misty apparitions. These apparitions often appear in hospital gowns, sometimes even with missing limbs from battle.

In between museum tours and some of the best food and drink in Florida, St. Augustine has a lot of unexplained attractions to offer. If you’re intrigued by apparitions, spirits, and presence from the beyond, don’t miss out on a US Ghost Adventures tour of St. Augustine.