The wealthy plantation owners and the slaves of Savannah’s past haunt its present at the Owens Thomas House. Learn more on a haunted Savannah tour. 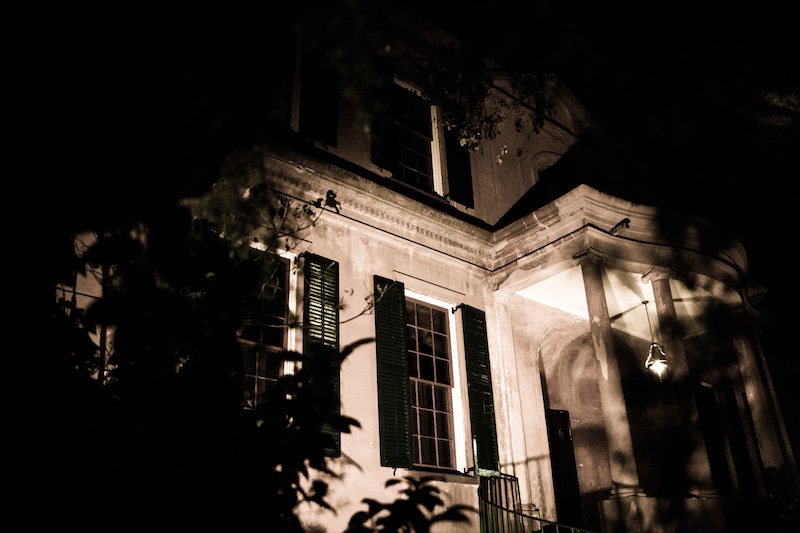 The Owens-Thomas House in Savannah represents the stark juxtaposition of the wealth and the slavery that existed for so long here. From the front, you’ll see ornate architecture, but inside you’ll witness the cramped and dark slave quarters where slavemasters forced up to 15 people to stay.

Some say that the Owens-Thomas House is the most haunted place in Savannah, with more ghosts per square foot than any other location. When you consider its dark history, it’s easy to see why.

Learn more about the Owens-Thomas House and the ghosts that reside in it. If you’re brave enough, take a tour with US Ghost Adventures and experience the chills in person.

The Lady in Gray

The “Lady in Gray” is Margaret Thomas herself, the last known owner of the building. When she owned it, she was passionate about her gardening. Still today, locals say that you can see her meandering about the property dressed in gray, tending to her plants just the same.

Oddly enough, these sightings mostly happen at night, when most gardening would be difficult. Perhaps she simply wants the opportunity for a quiet stroll among her beloved plants.

Some say that the bed where Margaret died inside the home is still somewhere on the premises, her spirit still tied to this bed. It could be the very thing that keeps the portal open for her to wander her favorite place, even in the afterlife.

While few think of ghosts as untidy, apparently, at least one ghost slob resides at the Owens-Thomas House.

One night, a maid was finishing up her rounds in the dining room, checking she had set all the tables in preparation for the morning. She locked up and left for the evening. Upon returning the next day, she was shocked to find one table in absolute disarray.

Items had moved, and the table cloth was in disarray. One of the chairs sat askew, pulled out from the table. It was as if someone had been there, enjoying a meal, and didn’t care to clean up after.

In one eerie tale, a museum tour guide was giving an evening tour when she heard the distinct sound of a match striking. Just then, she began to smell burning tobacco but couldn’t find anyone in her tour group smoking.

Her tour group witnessed it, too. One person even saw a brief flicker of a flame behind the tour guide, followed by a puff of smoke coming from thin air.

As soon as the tour guide began asking her group about what happened, the smoke disappeared.

While many ghost stories are just that, some also come with photographic evidence that strengthens the case. One example is a visitor with three very strange photos taken during the museum tour.

In the first photo, a large face is present in a window of the house. In the second, several orbs are floating around outside the house. And in the third, a blond ghost girl appears, with the flash reflecting in her eyes. She is wearing a dirty blue dress while standing next to an unassuming tourist.

Savannah is one of the most well-preserved historic cities in the US, which leaves us many clues and pieces to understand the past— and keeps the city alive with the spirits of the undead. Experience its past and present with a US Ghost Adventures tour of haunted Savannah.