The Colonial Park Cemetary in Savannah, GA holds the spirits of ancient residents and soldiers trapped in the city. Take a tour and see with your own eyes. 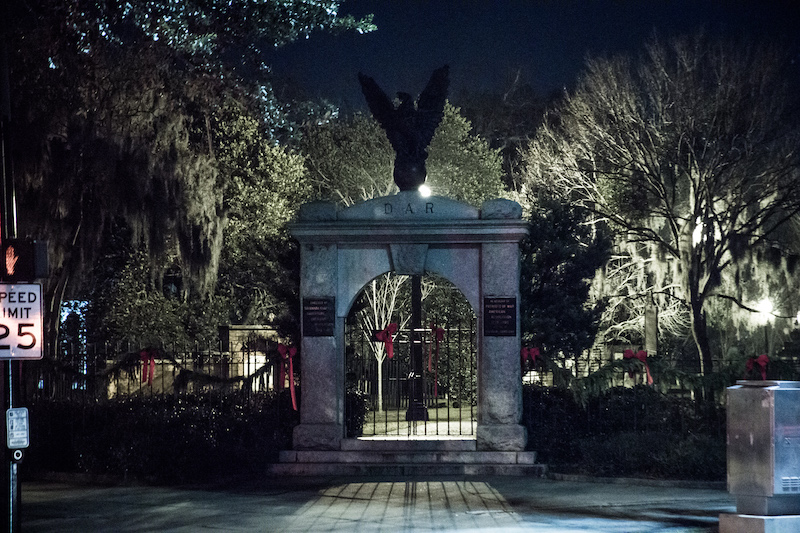 Savannah has seen war up close and personal, from the Revolutionary War to the Civil War. Many soldiers who fought and died in these battles lie buried here in the Colonial Park Cemetery.

This cemetery was not just an area for lost soldiers to be laid to rest, however. It also served as a burial ground for other residents.

Unfortunately, the city wasn’t always reliable in keeping track of which bodies lay buried and where. As such, a conglomeration of various spirits all kept right here leads to a bit of havoc and restless energy that lingers on the grounds today.

Learn what you may experience or see when visiting the Colonial Park Cemetary on a US Ghost Adventure tour of haunted Savannah.

Many hauntings occur in the cemetery, and visitors at night may just happen upon them. Some past reports include seeing the floating bodies of spirits lurking just above their graves, loud noises coming from an empty cemetery, and a green mist sometimes seen descending upon the headstones.

It’s not surprising that there’s so much ghostly activity here, as so many of these lost spirits died in battle, by disease, or by force to punish evil.

This varied population comes from all different backgrounds, creating quite a mix of spirits all in one place.

Savannah is a hotbed for voodoo culture and home to many practitioners who still practice its rituals. Before the cemetery began closing at night, it was common to find remnants of a voodoo ceremony in the morning.

What these people were doing with these lost souls, no one knows for sure, but the behavior and mess they left behind were telling. Sometimes, large chunks of soil went missing, and other times, it was human bones from the graves.

Savannah has an unfortunate history of losing or misplacing bodies. With that many deaths, they were overwhelmed with the work and didn’t have a good system to keep things straight.

In one incident, they even lost the body of the famed general Nathanael Greene. After 30 years without knowing where his body and his son’s body were laid to rest, someone finally found them in a family vault within the cemetery.

As the story goes, Rene Rondelier murdered two young girls in the cemetery. An angry mob descended on the man and took him to the “hanging tree” in the cemetery, where they hung him and left him for dead.

Legend says the ghost of Rene Rondelier remains, swinging from the tree or walking among the graves. While some may argue that there’s no way to know it’s his ghost, he was a 7-foot giant of incredible size, so it is hard to deny it if you see it for yourself.

Wars fought on Savannah’s blood-soaked soil have left their mark on the city. So many wars led to many deaths, and many of the soldiers laid to rest linger without moving on to the afterlife. Explore this and more haunted spots throughout this southern city with a Savannah US Ghost Adventures tour.