The Pacific-Union Club has a history riddled with secrecy and destruction. See it for yourself only on a US Ghost Adventures tour in San Francisco. 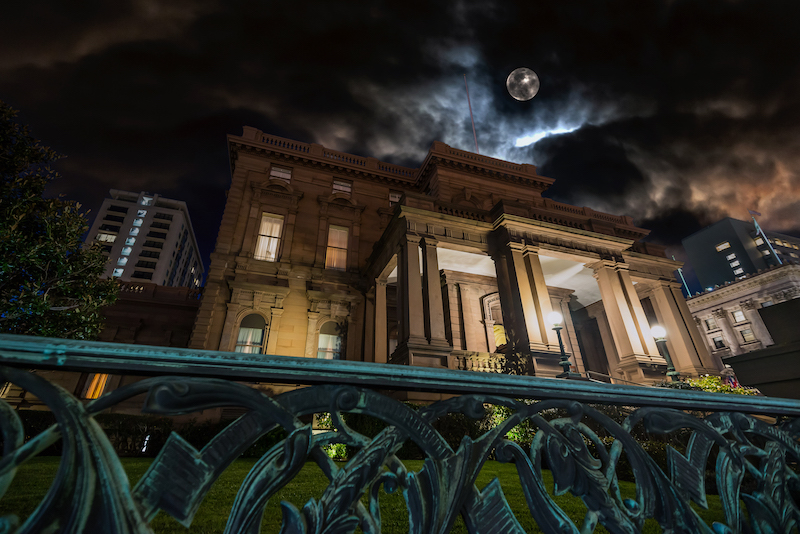 San Francisco is one of the most charming cities in the US, complete with old Victorian homes and views of the city’s two famed bridges. However, its rich history of the gold rush also makes for some unsettling and unexplained experiences.

One of the places where such eerie happenings have transpired is the Pacific-Union Club. Once a millionaire’s mansion, this now-social club is often visited by the curious from near and far who want to see if the haunting stories of the building are true.

The best way to experience the wonder firsthand is through a US Ghost Adventures Pacific-Union Club ghost tour, where you can voyage into the dreadful past of haunted San Francisco.

There have long been rumors about Nob Hill’s “secret tunnels,” but many didn’t believe it until one man was digging in his terrace in the 1940s only to find what looked to be an actual tunnel. The rumor is that the tunnel connected the Pacific Union Club to the “Jewel Box” house built by Herbert Law to hide his mistresses coming and going. He would meet ladies at the club and then usher them back to his home through the disguised tunnel.

While you can’t visit the tunnels themselves, you can still visit the famed Pacific-Union Club, where Law would scout his next mistress. Some local legends say that the spirits of these ladies still haunt the streets where they wander the tunnel underground—but you’ll have to visit for yourself to decide what you believe.

In 1906, San Francisco suffered a massive earthquake and subsequent fire that destroyed much of the city and just about everything on Nob Hill, with one exception: The Flood Mansion.

The mansion was the only building that remained. Built by silver baron James C. Flood, the brownstone was the first one built west of the Mississippi.

After the fire, the brownstone itself sustained extensive damage, but oddly enough, the walls remained. Following the fire, James’s daughter sold the building to the Pacific-Union Club.

Today, many visitors say that the restless spirits of those who passed away in the disaster continue to haunt the one place that survived out of resentment of the tycoon’s luck.

The Pacific-Union Club serves as a gentleman’s club with extremely secretive practices. The club prohibits members from discussing the club and what transpires behind closed doors. The only clues we have come from vintage members-only books detailing the previous house rules and by-laws.

Some say dark things happen in the building, while others say there are secret rooms. There’s only one way to know for sure…

San Francisco has a lot to offer in terms of the spooky, chilling, and frightening. Underneath the city’s charm are pasts of destruction, death, betrayal, and secrecy—the perfect backdrop for someone curious about the unexplained.

Experience the thrills for yourself with a US Ghost Adventures haunted San Francisco tour.