The Witch House at Salem

A walk through the Witch House transports you to the troubled days of the Salem Witch trials. Come on in and take a US Ghost Adventures Tour—if you dare! 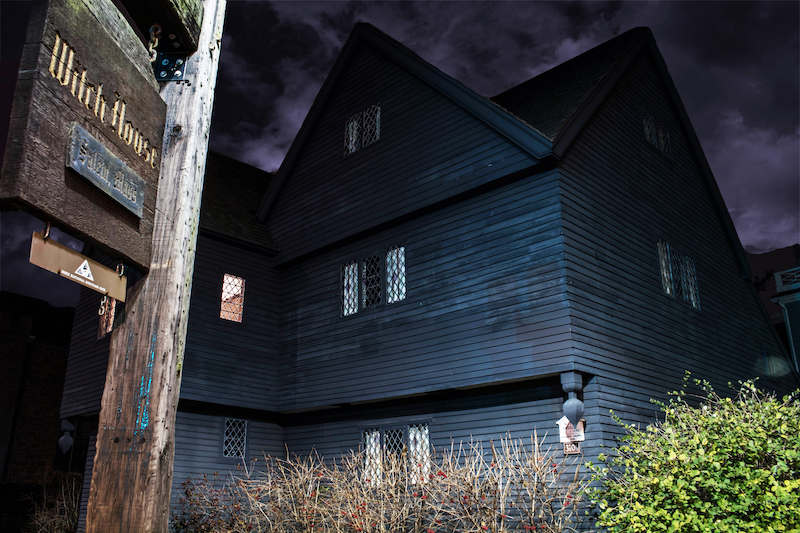 When you turn down Essex street in historic Salem, the air begins to chill. Out of the corner of your eye, you may catch an old, dark, and creaking building. That’s the old Witch House you’re staring at…and staring back at you.

The rickety Witch House, built in 1642, was once the home of one of the most powerful men in Salem: Jonathon Corwin. During the infamous Witch Trials, this local judge sent 19 innocent people to the gallows.

The good book says, “judge not lest ye be judged,” but Jonathon Corwin’s punishments never fit the crime. Each innocent person he sent to their death is another lost soul bent on avenging their deaths at Corwin’s hands.

Preservation or Lost in Time?

The Witch House is the only remaining building with a direct connection to the Witch Trials. The house today provides an in-depth look at 17th Century Puritan living. The gambrel roof is one of the few early American styles left in the country, and the antique furniture draws in colonial history buffs by the score.

But there are more than just relics in the home. Laying delicately on Judge Corwin’s desk are papers his troubled hand signed off on during the trials.

This dark and mysterious home gives you chills as soon as you cross the threshold. Perhaps more has been preserved from the 17th Century than just the architecture and furniture. It is as if the very air has been standing still for hundreds of years.

The home echoes with angry deliberations, as though Corwin’s troubled spirit is still running through his arguments against the accused.

If there truly is no rest for the wicked, then Judge Corwin is no exception.

Many guests at the Witch House report a cold shiver down their spine and an uneasy feeling upon entering. Some locals say that the souls of the accused seek revenge on anyone that would dare enter the house of a murderer.

More than one visitor has been pulled down an empty hallway, following the voice of some distant cry. When someone screams for help, will you try to save them?

Others say the only ghost lurking in the home is Corwin himself, looking to accuse new innocents. Even the purest soul is open to attack by this twisted spirit.

Whoever, or whatever, still wanders the Witch House, you can join them. Take a tour and learn the dark history of this Salem landmark.

Would you dare to open the door, step on creaking floorboards, and tiptoe through the very halls Jonathon Corwin paced on so long ago?

Go ahead; roll your eyes at the cliche of haunted Salem. If you aren’t afraid, you’ll have no qualms about taking a Ghost Adventure Tour of the whole city.

But even the most steadfast skeptics will find something chilling about Salem’s troubled history. The truth lies in waiting for curious minds to discover.