The Witch of the Opera House

It’s tough to mention ghosts in New Orleans without bringing up the Witch of the Opera House. Explore this haunted location on a US Ghost Adventures tour. 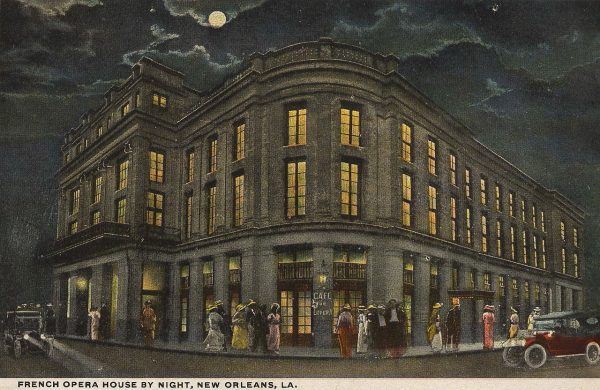 The New Orleans French Opera House was perhaps the most famous opera house in the United States. It was so popular that it gave New Orleans the title of the opera capital of America.

But despite its famed rise, the story of the New Orleans Opera House is a tale of misfortune and tragedy, involving a love triangle that ended in the untimely deaths of three of the city’s residents. Today, it’s one of the most famous haunted sites in the Big Easy.

You can discover these tragic pasts of betrayal and murder on a US Ghost Adventures tour of the Witch of the Opera House. Sign up and discover the haunting past of New Orleans.

The ground broke for the elegant French Opera House in 1859, and it looked stunning. In the heart of Bourbon Street, it was the cultural center of New Orleans for decades. Inspired by the European opera houses, the towering building’s Greek Revival style and four-tier auditorium exemplified the city’s decadence and old grandeur.

Sadly, the opera house burned down in a massive fire in 1919. The flames started down the street and quickly encased the opera house’s wooden interior.

That horrific incident left its mark, and many believe that some of the performers and attendees never left.

During the 1860s, one performer was quickly becoming a rising star in the American opera scene. Her name was Marguerite. Interestingly, she wasn’t a note-worthy opera singer, but she was getting increasingly popular due to her natural beauty.

However, her stardom started to slip as she aged. What’s more, she fell into financial despair after her husband died in an accident. She left the singing scene and decided to open up a bakery. To try and secure her success as a bakery owner, she recruited one of the best pastry chefs in Paris.

Soon enough, they transitioned from a professional to a romantic relationship. It appeared to be a match made in heaven in Marguerite’s eyes. Unfortunately, the young pastry chef eventually had his eyes on a younger, more attractive woman.

Upon suspecting that her young lover was losing interest, she followed him out one night only to find him having an affair. Out of spite, she snuck into the apartment and suffocated the two using the gas line in the fireplace.

After realizing what she had just done, she hung herself in the New Orleans Opera house in a state of shock. Since then, people claim to have heard strange wailing and screams coming from the theater. The once rising opera star Marguerite had now become the Witch of the Opera.

Even though the opera house burned down, her spirit still lurks around the site. Where the New Orleans opera house once stood is now occupied by bars and restaurants. Some people claim that you can encounter the witch nightly.

Locals or people passing through New Orleans can witness some of the most haunted places in America. In this city rich in history and entertainment, you’ll find countless attractions perfect for those seeking a spooky thrill. Add some excitement to your time in the Big Easy with our New Orleans Ghost Tour.