The Beauregard-Keyes House is one of the most famous haunted destinations in New Orleans. See more about this haunted site through our Ghost Tour. 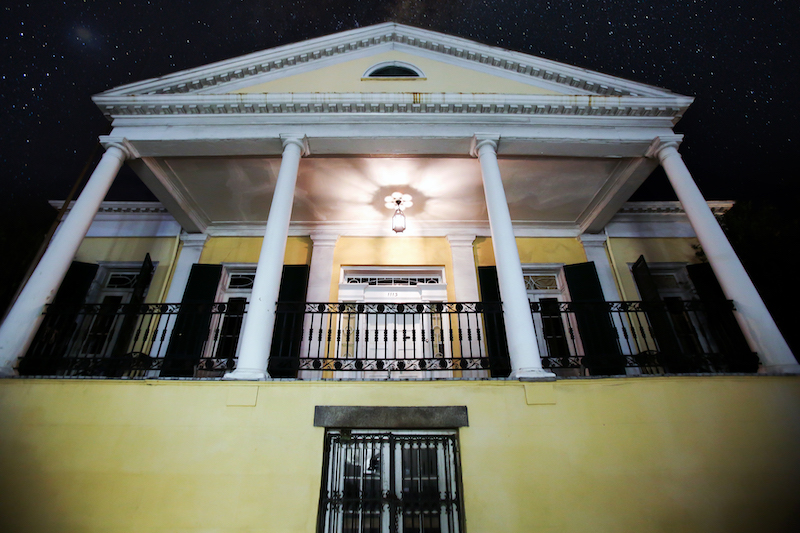 Nestled right in the French Quarter is the beautiful Greek Revival residence known as the Beauregard-Keyes House.

While the home is beautiful, the vibes people get when entering the property are nothing short of unsettling. As a result, it’s an excellent attraction for those interested in haunted America.

You can discover this dreadful past on a tour of ghastly New Orleans with US Ghost Adventures.

Several individuals have owned the house over the centuries, and the frequent changes in ownership may have to do with the history of madness that stains the grounds.

The origin story starts at the start of the 18th century. The plot of land that the Beauregard-Keyes would eventually occupy was initially for an armory for New Orleans. However, the land was transferred to a group of French Ursaline nuns by the King of France himself.

The nuns occupied the location until Joseph Le Carpentier purchased it in 1825. Le Carpentier had plans to construct his dream home. Unfortunately, it would be anything but a dream.

Le Carpentier’s grandson, Paul Morphy, lived in the house. Some know of Morphy as the greatest chess player to ever live. But others know of Morphy’s madness.

One evening, Morphy shocked the townspeople when he ran out of the house stark naked with an ax, screaming that demons were after him. Many claimed that the house’s sinister atmosphere drove him to madness, and he was never the same again.

Le Carpentier eventually sold the property to John Merle and his wife, both Swiss immigrants. Madame Merle made significant changes to the house, incorporating a massive garden in the back lot with a few other aesthetic touches.

Massive gardens were typical during that time as the French Quarter was known to smell unpleasant. What’s more, having a large garden would let the Creoles know that the family was humble. The Creoles weren’t too fond of the materialistic behavior of Americans, and most resented them for it.

Madame Merle transformed the property into a perfect blend of French and American design. However, they, too, ended up selling the house due to financial troubles. It seemed no one could stay on the property and make it a peaceful home.

The house eventually landed in the hands of grocer Dominique Lanata, who rented it out to general Pierre Toutant Gustave Beauregard of the Confederate Army.

Although the home was not a battleground, Beauregard’s men ended up quartering with him in the afterlife. Several reports of wounded Confederate Army soldiers bloody from war have added to the ghastly reputation of the home, and Beauregard’s ghost still walks the halls today.

The Mafia Comes to Town

The home again changed hands several more times, eventually going to the Giacona family, who were in the Sicilian Mafia.

The Giaconas sold illegal liquor and lived a lavish lifestyle, but it was too lavish for some. They attracted the attention of other mob bosses, who demanded more dues from Pietro Giacona, the family patriarch.

Pietro invited four of the bosses for dinner one night, seeming like he would be reasonable. Instead, he and his son committed a triple murder in the dining room and injured the fourth.

Now, the house is an infamous landmark in New Orleans, and many report seeing and feeling spirits present in the home.

New Orleans boasts a vibrant nightlife, delicious food, a thrumming jazz scene—and a spooky history. Discover it all on our New Orlean’s Ghost Tour and get ready for chilling adventures to haunt you for a lifetime.