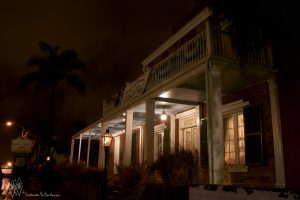 Despite the fact that a man had been publicly executed on the property, Thomas Whaley began constructing his dream house in 1856.The two-story Greek Revival became the heart of San Diego by the late 1800s, serving as the theater, courthouse, general store, and government office — by day. By night, it was occupied by the Whaleys and a phantom guest. The family told the San Diego Union they heard heavy, phantom footsteps throughout the house.

While they could handle the odd noises, the home’s negative energy was far more harrowing. After losing a son to Scarlett Fever and a daughter to suicide, Thomas Sr. packed up and moved his remaining loved ones to a new house downtown. He died in 1890, having never gone back to the home that held his hopes and dreams.

The making of Whaley House is also the making of California with all its gory and restless energy. When Thomas Whaley followed the gold rush and began construction in 1856, he declared, “My new home, when completed, will be the handsomest, most comfortable and convenient place in town or within 150 miles of here.” Handsome? Yes. Comfortable? Sure. But the place was also eventually the most haunted spot not just within the region but maybe even in the entire state.

Known as the finest residence in Southern California, the property is a two-story Greek Revival home made out of bricks. It was furnished with mahogany and rosewood furniture –– exactly what you would expect from a haunted house.

But in some ways Whaley House is not your typical haunted spot. In 1868, an upstairs bedroom was rented to a local theater troupe where they could perform and entertain the entire town. The show did not last long, however, because the theater operator mysteriously  died  just 17 days after opening night. Maybe looking to fill some of the empty rooms in their huge home, the Whaleys then turned another section of the home into the county courthouse, letting all kinds of convicted criminals walk through its doors –– you can’t just run such a busy home and expect it to go quietly into the night.

The property remained in the family for a few generations until the mid twenty century, and it opened its doors as a museum in 1960. Since then, countless visitors have been able to witness what many had already experienced even while some of the Whaleys were still alive: chilling sounds and apparitions from the home’s storied tenants.

The History of Whaley House

Thomas Whaley had high ambitions for his family’s residence, and sure enough, almost from the very beginning, Whaley House became a centerpiece of the San Diego community. Unbeknownst  to everyone in the town, more than just being San Diego’s first commercial theater, a county courthouse, and even a general store, Whaley House would also go on to become something else –– a haven for all kinds of ghosts and sinister spirits.

It didn’t take long for tragedy to strike. Soon after the family moved into their majestic home, the young one in the family, Baby Thomas, died from Scarlet Fever when he was just 18 months old. Those who visit the former residence often report hearing tiny footsteps, the sounds of a baby crying, and even joyous giggles when no one is to be seen. We guess the baby never flew the nest.

Baby Thomas wasn’t the only one to die on the property. The horse thief Yankee Jim Robinson was publicly executed for his crimes right behind the home’s grand structure. Mrs. Whaley probably wasn’t thrilled her backyard was once a corpse ground, but she knew what she was getting when she married a pioneer!

What Mrs. Whaley did not sign up for was a life of losing children. As if the death of Baby Thomas wasn’t enough, she and her husband lost their daughter Violet by suicide when she was just 22 years old. To make things even spookier, young Anna used her father’s very own .32 caliber gun and left a very somber suicide note, and her spirit is also one that is often felt around the property. Her death was such a scandal that her sister’s fiance called off the wedding, throwing the family in disarray and embarrassment –– and with a family as well-known as the Whaleys, it was hard not to be the talk of the town.

But true to their pioneer roots, the Whaleys show no sign of hiding from the public, even almost one hundred years later: visitors often see lights turning on and off, mysterious mists around the house, and chandeliers swinging ominously. Ever hungry for attention, Whaley House continues to be a San Diego cornerstone and a character on its own right –– the house almost seems to have a life of its own, and not in a good way…

Whaley House is not one to leave anything to the imagination. The people of San Diego have always known exactly what goes on inside those legendary walls, and the house ravishes the attention –– in fact, we have a feeling it likes its new status as one of the most popular museums in American history.

Haunted houses in California are just made differently. There is a magnetic pull to them that has an enchanting hold on those who visit –– despite knowing better, people just can’t stay away. For more haunted California, check out our article about one of America’s most infamous prisons — Alcatraz!