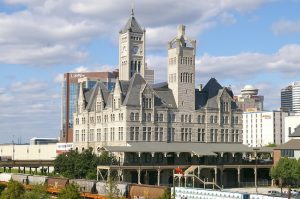 Once a working train station and a necessary part of America’s railway system, Union Station Hotel remains a must-see spot for those visiting downtown Nashville in search of history and haunts. Ghostly happenings here include an extremely haunted room, a heartbroken widow, and a spectral soldier. To experience Nashville and its haunts like never before, join us for our Nashville ghost tour!

Listed on the National Register of Historic Places, the Union Station Nashville Yards first appeared just over a century ago when travel by train was at its peak. Trains were especially active in Nashville, which has begun to transform into the modern metropolis that it is today. To cater to the increasing traffic, the Louisville & Nashville Railroad created a brand new train station downtown. The company hoped the facility would not only transport but enchant all those who used it.

Construction began in the late 1890s led by engineer Richard Montfort. Surprisingly, he had no formal training in architecture, only an engineering degree. Regardless of this, he built a magnificent structure that rapidly became one of the most defining buildings of the area. The station’s high towers and turrets allow it to stand out among the rest of the Nashville skyline.

Open To The Public

On October 9th, 1900, Nashville’s Union Station opened its grand doors to the residents and visitors of Nashville. Within a matter of months, the station was one of the busiest in the nation. Hundreds of folks passed through daily, the station soon resembling a bustling beehive of activity and travel. Famous names of the day passed through the station during their travels, such as movie actress Mae West. Federal Agents even escorted the infamous gangster Al Capone through Union Station as they transported him to the U.S. Penitentiary in Atlanta, Georgia. Countless servicemen & women passed through here on their way to fight for the war effort during WWII.

During the 1960s, the station began to see its downfall as the use of passenger trains gave way to air travel and personal vehicles. Train service was discontinued in 1979 and the building was left abandoned — a stark difference from the busy hub it had been just years before.

The train station acquired a new lease on its life after a small group of investors bought the property a decade later. Their intentions were to preserve the structure and historical character, and proceeded to renovate it into an exclusive vacation destination called the Union Station Hotel. Construction finished in 1996 and it opened to Nashville with roaring applause and excitement. It’s now known as The Union Station Nashville Yards and remains one of the most historic and popular lodgings in the city.

With thousands of troops departing the station during WWII, the hotel has most certainly held onto those frightful, nervous, and heartbroken energies that were felt by soldiers and the loved ones they were leaving behind. The most popular haunting at the hotel involves a woman by the name of Abigail. At just 20-years-old, she bid farewell to her beau on the Union Station platform before he left to be deployed in France. While standing there, she promised him she would meet him again in the same spot once the war was over. She kept her end of the agreement and returned to the station after the conclusion of WWII. She soon learned that he had been killed while in Europe, and was so heartbroken that she threw herself in front of an incoming train.

Abigail is witnessed by countless guests and visitors to the old station, one story in particular truly captures the final moments of Abigail.

‘A woman was having a smoke out on the hotel’s old platform, witnessed a woman dressed in vintage clothing. Without taking her eyes off the mysterious woman, she continues to smoke. The woman disappeared for a few seconds, only to reappear, hop over the rail, and drop onto the tracks – which were several feet below. The woman is hysterical, thinking she just witnessed someone jump to their death, but when she looked over, there was no one. All she saw down on the tracks was a man in uniform, waiting for someone. It is said that the man is the ghost of the U.S. soldier, who returned to the terminal to find Abigail.’

Most guests believe that the ghost of Abigail and her soldier are stuck in a loop. She jumps to her death and he appears seconds later, but sadly they always miss each other. Abigail’s story is usually the explanation for the ghostly happenings and eerie feelings guests experience while staying in Room 711. Others believe that a completely different entity occupies this space.

People who spend the night in this famed room report flickering lights, ringing telephones, and stomping on the ceiling. Other describe the sounds of heavy furniture being dragged on the top floor. The only problem with any logical explanation here is that Room 711 is on the top floor. Others feel sudden drops in temperature throughout the room and a lingering feeling of being watched.

Many guests believe the spirit in Room 711 is indeed Abigail. The director of sales and marketing at the Union Station Hotel, Kate Thompson, told of Abigail:

“She is known to roam the halls looking for her lost love, but this is definitely the room that she has claimed as hers. This is where we hear the most, we’ll hear the phones are ringing but nobody’s there, the lights will go on and off, random noises from above the room, but this room is on the top floor of the hotel.”

She continued, “We had a gentleman who was actually working for the company who stayed in this room and heard dragging noises above his head, and he said it sounded like furniture like they were moving heavy pieces of furniture and just dragging it and dragging it.”

No one knows for sure who haunts the room, but with a century of history at the Union Station, it could be just about anyone.

“We used to have mirrors up on the seventh floor and people have sworn they’ve gone up there by that room and taken pictures and seen a silhouette, There is a time when I’ve gone down the steps over here at night, sometimes I might get a little chill, but I’m not afraid, but it is weird.”

Most of the hotel staff and guests report that Abigail is not a vicious spirit, but she does like to make her presence known. There are rumors that Abigail haunts Room 711 because it gives a good view of the train tracks — it’s almost like she’s keeping an eye out for the day her soldier finally comes home.

Are you brave enough to book a room at the Union Station Hotel? What about Room 711? You just might run into Abigail or perhaps you’ll solve the mystery of who the entity in this infamous room really is!

For another truly historic haunted hotel, check out our article about Lake George’s Sagamore Hotel!