Top 10 Most Haunted Hospitals in the World 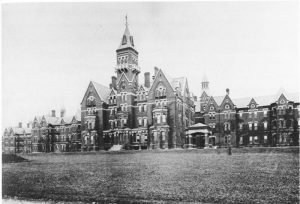 Hospitals, asylums, sanitoriums… just these words alone conjure images of suffering, sadness, and death. Some hospitals have relinquished their original grandeur, and lie in a state of disrepair and ruin — some for decades. Once known for their unmatched service, they are now slowly being reclaimed by nature, leaving us with a spooky glimpse into their pasts.

We have rounded up a list of the most disturbing and the most active. Without further adieu, the top 10 most haunted hospitals in the world!

Known by locals for its gruesome past, the Royal Hope Hospital was a Spanish military hospital used during the late 1700s until the early 1800s. The original hospital has since been demolished, but a replica was erected to house the victims of the Seminole War. During reconstruction, workers were stunned to find that the hospital was built atop an ancient Native American burial site.

Reports out of Royal Hope include unexplained groans, moans, and shouts. Beds are even said to move around the room on their own, while patient belongings go missing only to turn up later on. Full-bodied apparitions of men in military garb are reported on the grounds of the hospital, while a feeling of dread is experienced by visitors to the area.

Built in 1907 as a private ranch, the Tranquille Sanatorium changed its purpose when tuberculosis started to overtake the area. The owners decided to use the large building as a place for tuberculosis patients to rest and recover. A small campus known as ‘Tranquille’ was built around the facility, and it had acres of gardens, houses, a farm, even a fire department of its very own. In 1958, the sanatorium closed its doors, only to reopen a year later to treat mentally ill patients. It closed permanently in 1983.

The sanatorium’s years of sickness and sadness seem to have been absorbed by the land, and these feelings can be experienced by the living. The sanatorium is famous for its floating orbs, inexplicable feelings of unease, and massive temperature changes throughout the facility.

There is even a story that tells of a nurse who was murdered by a patient here — she is seen as a glowing blue apparition, hovering the halls of the old hospital.

Severalls Hospital is located in Colchester in the United Kingdom and was constructed in 1910 to serve the needs of psychiatric patients. It opened its doors in May of 1912 and provided a home to just about 2000 patients. Most of the buildings on campus are designed in the Queen Anne style by architect Frank Whitmore. Known as one of the most haunted hospitals in the United Kingdom, Severalls closed as a psychiatric hospital in the early 1990s following the quick closure of other institutions.

A small section of the hospital remained open and served elderly patients suffering from the side effects of severe stroke until March of 1997 when it finally shut down for good. Ghost hunters of all types flock to Severalls in search of evidence of disembodied voices and shadow figures that are reported frequently.

Near Preston, Whittingham Hospital opened as a psychiatric hospital in 1873. It quickly grew to be the largest mental asylum in Britain. It operated without a hitch until 1967, when it faced controversy after complaints started to arise of mistreatment of patients in the St. Luke’s division, especially in the women’s ward.

Complaints were heinous, patients were said to be locked alone in small rooms for days at a time, left outside in wheelchairs to brave the elements, patients were dragged by their hair, a ‘wet towel treatment,’ which was described as a damp towel being wrapped around the necks of ‘unruly’ patients to induce unconsciousness, and even nurses setting fire to patients clothing while it was still on their body. Beatings and mice infestations were commonplace as well.

With all of this negative energy from the hospital’s past, it deserves its spot on our top 10 list. Investigators report feelings of being watched and even being pushed if they venture too far into the bowels of the hospital.

In Changi, Singapore lies the Old Changi Hospital. It was previously known as Royal Air Force Hospital and was then merged with the Toa Payoh Hospital. After it shut down in 1997, it sat with nature alone for over a decade.

Now regarded as one of the most haunted places in all of Singapore, Old Changi Hospital was captured during WWII by Japanese forces and was used as a healthcare facility for the prisoners of war detained at the military base nearby.

One can only imagine how these prisoners were treated within the walls of the makeshift hospital, and the fear left behind has left visitors scratching their heads when they witness dark shadows floating around the outside of the facility. Perhaps these are spirits of old security guards, making sure none of the POWs escape.

The Clark Air Base Hospital was cited by Ghost Hunters International as one of the most haunted places on Earth. It served as an airbase from the early 1900s until 1991 and its long, violent history has created the perfect storm for terrifying happenings. The base was a dwelling place to which countless wounded American soldiers evacuated during the Vietnam War, and the traumas and deaths that occurred at the base left their mark on the hospital.

Headless apparitions, disembodied voices, orbs, and screams are common occurrences for the residents that live nearby. Most locals don’t dare enter the building, and the violent spirits observed here have rendered the entire area off-limits. In the Clark Museum nearby, the spirit of a serviceman who hanged himself in the area is said to haunt the building.

Now called Aradale, this iconic Aussie hospital was the largest of its kind when it opened in 1867. Throughout its existence, the facility held tens of thousands of patients, including the most dangerous psychiatric patients of the time.

Even more chilling is to learn that over 13,000 people died in the facility throughout its 130 years of service. An astounding number of lives were lost. The facility reopened as an institute of learning in 2001, with visitors and students reporting violent hauntings throughout the entire building and grounds. Would you seek higher education here?

Taunton State is a psychiatric hospital located in Taunton, Massachusetts. Now just a shell of one of Massachusetts haunted hospitals, the building opened its doors in 1854. Taunton State bore witness to hundreds of psychiatric patients and, more notably, a couple of notorious serial killers. Originally known as the State Lunatic Hospital at Taunton, it was the second of its kind in the state of Massachusetts. The hospital and surrounding facilities are located on a rolling 154-acre farm along the Mill River. The complex itself was expanded several times to make room for more and more patients. At its largest, it was comprised of over forty structures. Anthony Santo and Jane Toppan were housed here, both some of the most prolific serial killers in history. To learn more about Danvers, check out our article here!

Originally known as the Athens Lunatic Asylum, it is the only Ohio mental hospital that still resembles its original condition. It opened in 1874 and over the years the hospital underwent nine official name changes and stayed in operation until 1993.

History tells that there are just about 1900 unidentified patients buried on the grounds of the hospital, notorious for its lobotomy procedures. Each headstone is only marked by a number only, no names.

The hospital was also the location of a 1978 disappearance of a female patient. Her corpse was discovered a year later in an abandoned section of the hospital. Bloodstains from the scene remained visible in the room for more than three decades after.

The Danvers State Hospital was a psychiatric hospital located in Danvers, Massachusetts. It was built in 1874 and opened in 1878, staying in business until it was closed in 1992 due to budget cuts. Strangely, the judge who presided over the Salem Witch Trials, John Hathorne, also lived here a few hundred years ago. Soon after its opening, reports began to spill out of inhumane practices occurring in this haunted Massachusetts hospital. Shock therapy, lobotomies, drugs, and straitjackets were commonplace. Reminiscent of Rolling Hills Asylum and Pennhurst Asylum, the cruelty carried out here left energetic imprints that have lasted throughout the 21st century.

A total of 278 people reportedly died at the hospital in one year. Danvers is now known as the ‘birthplace of the prefrontal lobotomy,’ and lobotomies left patients in a hellish daze, wandering the halls. Horror novelist H.P. Lovecraft even used Danvers as the inspiration for his Arkham Sanitarium. Sound familiar? Arkham Asylum was the backdrop from which DC Comic’s Batman’s ultra-psychotic villains come from!

But what about real hauntings? The only remnants of the horrid practices here are two cemeteries, filled with 770 bodies. Visitors to the hospital report screaming, banging, and crying. The cemeteries are also hotbeds of paranormal activity, in which apparitions are common.