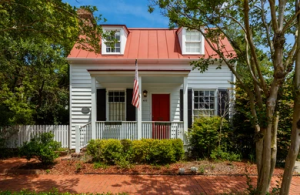 While the Willink House isn’t your quintessential haunted southern mansion, the dainty white cottage hides a dark history. The unassuming home seems out of place on Savannah’s historic streets, looking like it would be more at home in Cape Cod. The home was once the property of influential ship builder Henry Willink, who was charged with building some of the Confederacy’s biggest and most powerful vessels.

The Willink House is now home to a handful of entities, one of which being the late wife of Willink, who died a tragic and untimely death, other spirits include Willink himself and a group of children who used to go to a clandestine school at the home.

Henry Willink was born to a German immigrant named Frederick Willink, a well known merchant who had done well for himself and his family by working until he built up a substantial amount of wealth. Frederick Willink owned a shipyard, and his son Henry followed in his footsteps.

Henry left for New York to learn the trade and ended up returning to Savannah in 1851 ready and able to open a shipyard of his very own. Willink had his home built upon his arrival to the city, perhaps even earlier, as records of the home date back to 1845.

Henry and his business associate, Arthur Miller, named their company Willink and Miller and immediately got to work building large ships. They became so successful so quickly, that the Confederacy contracted them to build their ironclad vessels during the American Civil War. The Confederates relied heavily on European shipyards and were in the market to find a domestic shipyard that could build ships that would hold their own against the Union. Willink and Miller were sure that they had the means to deliver.

Unfortunately, they did not. Their first gift to the Confederate army was the C.S.S. Georgia, also known as the Ladies Gunboat. She cost a whopping $115,000 to construct, totaling just over $1.8 million in today’s standards. The Confederacy expected a first-class ship, but what they received was a clunky disaster. The iron armor on the C.S.S. Georgia was so dense that it wasn’t practical.

During her voyages down the Savannah River, the public questioned the ship as well as Willink and Miller. The company even launched a P.R. campaign to try and quell the concerns of Savannah residents. The company claimed that the ship was meant to function as a floating battery and not a warship, but no one bought that excuse.

Willink and Miller started working on the second ship for the Confederacy even after their first failure. This time they worked to learn from the mistakes of the C.S.S Georgia. Again, they failed. The C.S.S. Savannah didn’t fair much better than her predecessor. It was bulky, difficult to maneuver, the interior was hot, humid and worst of all — the ship leaked. The C.S.S. Savannah did provide some use to the Confederate army, but they sunk the ship themselves in 1864. This was presumably done to save face in case Union forces captured the ship and saw that the Confederates had useless ships.

Both the C.S.S. Georgia and C.S.S. Savannah were destroyed near Fort Jackson to prevent such embarrassment.

Tragedies of the Willink House

The love that Henry had for his wife was the driving force behind his can-do attitude. Unfortunately for Mrs. Willink, Henry’s passion for his work would eventually be her undoing. Henry loved his career, and he desperately wanted to share his projects with his wife. He eagerly invited her to take a trip to his shipyard with him, which she agreed to do.

After arriving at the yard, things were business-as-usual. Everything was great, and Henry gave his wife a tour around the premises. As she climbed up a flight of stairs, Mrs. Willink tripped and fell over the railing of the yard and plunged into the Savannah River. Henry was horrified, he rushed to save her but he was unable to make it to her before her heavy dress and skirt weighed her down, essentially sinking her. She drowned as she fought against the current, but succumbed to the river leaving Henry devastated and alone.

In the years that followed, Henry worked even harder to try and keep the death of his wife off of his mind. He often saw her apparition in the middle of the night, his only escape was to run to his shipyard in the middle of the night, slamming the house’s door behind him. One night, he saw his wife’s ghost again, this time while he was at the yard. She was hovering by the rail where she fell. Henry reached out to touch her and ended up falling into the river too. Nearly suffering the same fate as his late wife, he was fortunately able to swim to safety.

Sometime after Henry sold the family home, it fell into the hands of a woman named Catherine Deveau. She was a teacher and was a supporter of African American families who hoped for freedom and equal treatment. Mrs. Deveau began to use the home as a secret school for African American children, who otherwise weren’t allowed to attend school. She taught math and reading, motivating the kids to learn by offering candies for correct answers.

This type of school was illegal, as wealthy landowners thought that educating African American people would lead to rebellion from an educated populace. Mrs. Deveau was running a huge risk as she would be shunned or killed if she was found out, which she was eventually. She was forced to leave the city. No one knowd for sure what happened to the children that attended the school, but one can only imagine it was a worse fate than Mrs. Deveau.

Although the true location of the Deveau school is disputed, visitors to the Willink House claim they have seen spirits of children in the home.

Hauntings at the Willink House

The apparitions of children are commonly seen inside the Willink House. Pieces of candy have even been found in random places, and some even say they’ve seen candy used to spell out math problems on the floor.

Henry Willink himself is said to haunt the home, the sound of his footsteps echoing throughout the rooms and halls of the cottage. Neighbors state that they can still hear the sound of the front door slamming shut and his hurried phantom footsteps as he runs off to the shipyard. The spirit of Mrs. Willink is also said to reside in the home as well, her apparition seen in the windows of the home and walking around the general area. Although the home is privately owned, her spirit is reported by passersby and historians.

Delve Deeper into the Haunting History of Savannah

Savannah is well known all over the world for its spirits, bloody history and haunted locations. Savannah’s historic district boasts some of the country’s most haunted homes, like the Hampton-Lillibridge House, which like much of Savannah, is built atop a burial ground.

To learn more about the haunted true history of Savannah, why not join us for a historically haunting ghost tour? You’ll experience the darker side of Savannah like never before. Or check out our map for a list of locations we offer tours in!