The Tale of Krampus 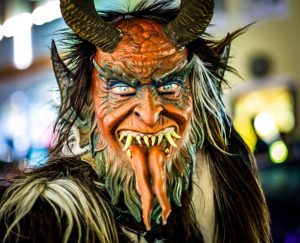 Originating in Germany, Krampus is the half-goat, half-demon monster that punishes misbehaving children around Yule (or Christmastime.) He is the devilish counterpart of St. Nicholas. Krampus’ name is derived from the German word ‘Krampen,’ which means ‘claw.’

The Legend of Krampus

Every year in December, children across the world prepare for the visit of Santa Claus, or St. Nicholas, and expect their yule trees to be covered with shiny new gifts, rewards for their great behavior throughout the year. What happens to the children who haven’t been on their best behavior?

While some believe that Santa Claus will just leave lumps of coal in their stockings, children all across Europe had a much more frightening threat looming over them — Krampus. He is said to visit during the evenings surrounding Christmas Day and chase naughty children with birch sticks, smacking them, scaring them, perhaps even stuffing them in his cotton sack and dragging them back to hell alongside him. European versions of St. Nick have long had creepy counterparts like Belsnickle and Knecht Ruprecht who dealt out punishments. Krampus is one of these characters, originating in Austria’s alpine region, where he’s been scaring the pants off of misbehaved kids for hundreds of years.

Krampus originated through pagan celebration of the winter solstice, and later he became part of Christian tradition in which Santa Claus visited children to reward them on December 5th, or 6th. Around that time, Krampus would tag along, visiting kids to punish them. In alpine Austria and even some parts of Germany, this day was known as ‘Krampusnacht,’ or ‘Krampus Night,’ when adults may dress up as Krampus and scare the children at their homes. Kids may have also seen Krampus parading around the streets during a ‘Krampuslauf,’ which means a ‘Krampus Run.’ Krampusnacht was a way to scare children into good behavior, but Krampuslauf was a way for grown men to blow off steam while still frightening the kids of the village. Austrian men would dress in fur suits and wooden masks carrying cow bells, and run through the streets dressed as the fearsome devil, a tradition originally meant to disperse winter’s ghosts.

Krampus’ roots have nothing to do with Christmas. Instead, they date back to pre-Germanic paganism in the region. Tradition has it that he is the son of the Norse god of the underworld, Hel. During the 12th century, the Catholic Church attempted to banish Krampus celebrations because of his resemblance to the devil. More eradication attempts followed in 1934 at the hands of Austria’s conservative Christian Social Party. But none of it held, and Krampus emerged as a much-feared and beloved holiday force.

While Krampuslauf continues into present day, the introduction of mass visual media swept the charismatically frightening Krampus up into the postcard industry. In the 1890s, Germany and Austria experienced ‘Krampuskarten,’ holiday cards adorned with the spooky sidekick.

These holiday greetings cards weren’t meant to make you feel fuzzy inside, and ones marked ‘Gross mom Krampus, or greetings from Krampus, showed Krampus stuffing distressed children into his satchel and preparing to hit them with bundles of birch sticks. Many of these postcards depicted the horrors of a meeting with Krampus, with children in chains and stuffed into Krampus’ bag, headed off to the underworld.

Depictions of a Devil

Krampus is shown in many different ways, but they all seem to be fairly similar. These depictions began with the postcards that hailed from Austria, designed to share the legend. Krampus is three times the size of a full-grown man, with a mangled and deranged face adorned with bulging, bloodshot eyes, and a body covered with long, matted hair. Krampus has long, sharp teeth, which are on display as he chases children through the streets, grinning. Krampus is also usually shown with long horns protruding from his skull. Strangely enough, Krampus is usually shown with one cloven hoof and one human foot covered in hair — but no one is sure why.

“The Krampus is the yin to St. Nick’s yang,” tells Smithsonian.com. “You have the saint, you have the devil. It taps into a subconscious macabre desire that a lot of people have that is the opposite of the saccharine Christmas a lot of us grew up with.”

December 5th is Krampus’ Day – if you survive his siege, you might live till December 6th, when St. Nicholas arrives to bring treats and gifts.

Krampus may be a full blown monster, but Santa is his pal – the two are linked in a strange Christmas yin-yang, parading around villages at night.

Krampus parade goers hit, push, and whip spectators, just like Krampus does – here’s a description of the Salzburg Krampuslauf from a tourist who expected a silly parade but came home with red welts:

“The narrow streets in the Old City section of Salzburg were packed with pedestrians as the Krampusse stomped through. Many people were caught unaware and reacted with terror. Some would flee and try to seek refuge in a shop or restaurant, only to be pursued by a determined Krampus. With so many easy targets, we again managed to escape largely unharmed. At times we were chased, jostled and struck, but compared with the brutality we witnessed, it was obvious we had been spared the full brunt of what Krampus could muster.”

Some households in Austria have year-round decor showing Krampus – legend has it that Krampus would deliver gold-painted bundles of birch sticks to children. These were essentially a threat, as they were the small versions of the bundles he uses to beat unruly children. Families hang these birch bundles on their walls year-round as decoration, a reminder to their children to stay in line.

Austria isn’t blind to the fact that those living in the area may not be familiar with the traditions of Krampus. For some, the annual festival of child-hunting Krampus is fun—but concerns that refugees in the Alpine towns that celebrate Krampus could find the tradition frightful has prompted some towns to consider taming the horror.

This year, Krampus’ scheduled arrival in the Alpine towns that celebrate him coincides with an influx of refugees from Syria and Afghanistan. Though the festival is historically well-loved, it gave rise to concerns that the new neighbors might be scared of the tradition and its nightmare-fueling costumes. Rather than cancelling the parade, town officials decided to educate the newcomers, giving a presentation where the props, costumes, and customs of Krampus were discussed.

Krampus has even shown up in the mainstream media, with a 2015 movie named ‘Krampus.’ The movie tells the story of a child who had a less-than-enjoyable Christmas accidentally summoning the festive demon into his family home. As he unleashes the wrath of Krampus, the previously feuding family must band together to save their neighborhood from Krampus.

Krampus has become increasingly popular in the United States with depictions showing up on popular TV shows such as Supernatural, Grimm, and The Colbert Report.

The holidays can be frightening enough without the addition of a devilish beast with a penchant for assault, but Krampus is well-loved and terror doesn’t have to be put on the shelf just because we’ve entered the season of joy, love, and togetherness. Merry Krampusnacht!