The Tale of Black Aggie 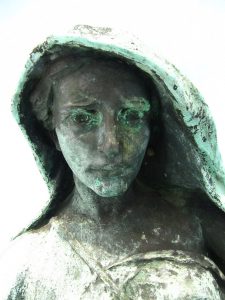 Black Aggie is the name given to a statue that was placed on the grave of General Felix Agnus in Druid Ridge Cemetery located in Pikesville, Maryland.

Back in the 1950s and 60s, Black Aggie became a mecca for Baltimore teenagers coming to test the myth that sitting in Aggie’s lap would cause sudden death. Few of them looked down in front of Aggie’s statue, to find the grave of Felix Agnus.

Agnus led a full life, born in France in 1839 and at age 13 he traveled the world. He joined the French Third Regiment of Zouaves when he was just 20 years of age to fight in the war against Austria. He later fought alongside Guiseppe Maria Garibaldi, helping to unify Italy.

In 1960, Agnus came to America with his mother and sister, settling down in Newport, Rhode Island. He later moved on to New York City where he worked for famed Tiffany & Co. as a sculptor and silver chaser.

Felix’s involvement in war didn’t end in Italy, he enlisted in Duryee’s Fire Zouaves as a private during the American Civil War and was quickly promoted to lieutenant after he helped to save the life of his captain. Agnus was severely wounded at the Battle of Gaines Mill and was sent back to Baltimore to recover, taken care of by Charles Fulton’s daughter Annie. After he recovered, he joined the 165th New York Zouaves, a unit that saw a ridiculous amount of hard fighting for the rest of the war. By the end of the war, Agnus had been promoted to Brigadier General and carried many wounds on his body. He often was quoted saying ‘Shot 13 times, always in the front.’

As fate would have it, Agnus married his caretaker Annie Fulton and made Baltimore his home. He purchased a family plot in Druid Ridge Cemetery to ensure that he and his family were buried together. Around that same time, a sculptor named Edward Pausch created Black Aggie, a copy of the statue ‘Grief,’ which stood in Rock Creek Cemetery in memory of a Marian ‘Clover’ Adams who took her own life by drinking photography chemicals.

Agnus purchased the copy of ‘Grief’ and had it placed at his family plot in Druid Ridge, to watch over himself, his wife Annie, and his mother, who are all buried on the plot.

The statue, a somber seated figure in a shroud, was installed at the cemetery in 1926 and has been surrounded by countless urban legends since then. Here are just a few:

1 – Someone spending a night in the statue’s lap would be haunted by the ghosts of the people buried there.

2 – The spirits of Druid Ridge used the statue as a meeting place, and that no grass would grown on the ground where the statue’s shadow laid.

3 – The statue would come alive at night, either physically moving across the cemetery or opening its glowing red eyes.

These legends obviously led to a lot of unwelcome attention from local teenagers and ghost explorers looking for answers to the strange lore. People were caught breaking into the cemetery at night to visit the statue and see for themselves which of the stories were true, as well as vandalizing the pedestal.

The Agnus family, upset and disheartened by the attention the statue received, tried to donate it to the Smithsonian American Art Museum, who decided against displaying the statue and instead placed an authorized recasting of the original memorial.

Black Aggie was moved from museum storage to a courtyard behind the Dolley Madison House on Lafayette Square in Washington, D.C. where she currently rests. The pedestal is the only piece that remains at Druid Ridge Cemetery these days.

So, are all of the Black Aggie stories just that? Stories? Or is there other energies at play manipulating the statue that had grown so popular? Perhaps it was just lore created by bored Maryland teenagers, looking for a spook on their Saturday night. Regardless, Black Aggie will go down in history as Maryland’s (and now Washington D.C.’s) most haunted statue.