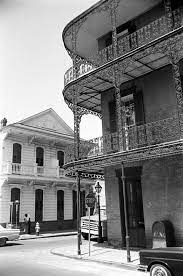 Also known as the Gardette-LaPretre House, the Sultan’s Palace is that of legend. It’s past tells of blood in the streets, limbs strewn about, a Sultan’s brother buried alive in the garden. Parties, intrigue and mass murder wrap up the mysterious history of this French Quarter marvel. Almost two-hundred-years ago, the building at 716 Dauphine Street was constructed. No one know the mark it was going to leave on the French Quarter, but join us as we dive into what makes the Sultan’s Palace one of New Orlean’s most haunted houses.

The Legend of the Palace

Philadelphia native, Joseph Coulon Gardette had arrived in the Big Easy just a few years before with the hope of becoming a successful dentist in the area. Within four years, his practice prospered, making him a very wealthy and successful man. Wanting to enjoy the fruits of his labor, he hired local architect Frederick Roy to design him a grand home. The three-and-a-half story mansion was born, and it even boasted a raised half-basement, a rarity for the wet states of the south, especially at that time.

A few years went by and Gardette decided he wanted to sell his first home at the corner of Dauphine and Orleans Streets. The home was purchased by Jean Baptiste LePrete, a wealthy bank merchant and plantation owner who purchased the property for $20,049 in 1839 — a stunning number at the time.

LaPrete was ridiculously wealthy, and by the 1850’s he hired a specialty builder to come and add the ornate wrought-iron balconies seen today. (reminiscent of a certain Madame’s murder home…) The LaPrete family enjoyed this home during half of the year while they stayed at their plantation in Placquemines Parish the other half. They basked in the glory of their cash, until the Civil War erupted in the 1860s, when they could no longer maintain the upkeep on the LaPrete home and were forced to rent it out.

LaPrete was approached by a man of Middle-Eastern descent, he was looking to lease the beautiful grand mansion. He explained to LaPrete that his brother, who was a Sultan, was interested in living at the property. Contracts were signed, and LaPrete surely breathed a sigh of relief as this financial burden was removed promptly from his shoulders.

A ship arrived soon after in the port of New Orleans — the Sultan had arrived! Military men dressed in dark clothing, each carrying a bayonet disembarked the ship, then the Sultan’s brother, and finally the Sultan himself. All of his furniture and decorations were brought out afterwards, with each piece more expensive and lavish than the last. This procession continued down to Jackson Square from the port, finally leading up to the steps of the Gardette-LaPrette House.

The home was a mystery to locals, each evening the sounds of laughter and the smell of opium wafted from the open windows. Parties in which New Orleanians were not invited. The home soon became nicknamed the Sultan’s Palace, as it was a private and provocative place that only the Sultan and his clique would experience.

A Dark and Stormy Night

A freak storm bashed the city one night and everyone in the French Quarter hunkered down into their homes to wait out the storm. The scene was set, no witnesses, no sounds could be heard from the Palace. The next morning was brisk and blue, the sun shone, and as a man walked down the street, he was stopped dead in his tracks from what he saw coming out of the Sultan’s Palace.

Trickling down the front steps of the mansion was blood, it ran like a small creek, pooling in the uneven stones leading up to the door. Police arrived shortly after, and as they realized that this was too much blood for just one man, they all held their breath as they opened the door of the palace.

They gasped. These tenured officers of the law could not put into words the horror that the Sultan had brought to their city. Corpses littered the floor of the home, some missing limbs, all of them completely covered in each other’s blood. It’s as if a battle had taken place inside the palace walls that stormy night. Who could have possibly done such a thing?

As they made their way throughout the home, no living person greeted them, everyone in the home was deceased. As they made their way out to the courtyard, a horrific sight awaited them — a single hand, muddy and sticking out of the wet ground, fingers spread out. The Sultan had been buried alive.

While the committer of these horrid acts was never discovered, police believe that it could have been the Sultan’s very own brother, as his body was never found in the home. Could he have hired assassins to murder his brother and his constituents? Perhaps there was a large inheritance awaiting him that he could not longer wait for…

The Truth Behind the Sultan’s Palace

Many stories of the palace are told throughout history, including one that ends in the murder of the Sultan and his harem. No historical records exist that lend credence to the tale, but by 1922, the legend of the massacre stuck, truly cemented in the book Legends of Louisiana.

In the 1940s, the New Orleans Academy of Art had purchased the residence, but closed after too many of its students were drafted to serve overseas in WWII. The home then became a halfway house for the city’s homeless population, until 1966 when it was purchased and restored by Frank D’Amico and Anthony Vesich Jr. They converted the home into private apartments which still exist today.

So, if a massacre didn’t occur and the home doesn’t have blood seeping through its foundation, then why is it haunted? How are there over a hundred years of ghostly accounts?

In 1979, D’Amico’s wife came to bed, she lived in the penthouse of the palace, a beautiful apartment with great views of the area. As she described it, a huge dark figure appeared at the foot of her bed. It began to glide towards her, and as she scrambled to turn on the light, the figure vanished.

When a new owner purchased the property, the spirits just became more active. Nina Neivens thought very little of the murders that were said to have occurred in the home. She actually only reported missing items such as keys or wallets.

According to historians and ghost enthusiasts, there are two main entities that haunt the old palace. The first is that of a Confederate soldier, who haunts the home donning his military uniform. The second is the spirit of an unknown woman who is believed to have lived in the house at one point.

But why is there a Civil War soldier in the home? No battles were ever fought in the local area. Could one of the artifacts or old furniture have some sort of an attachment to it? That remains a mystery, but the hauntings are a sure thing. Residents today of 716 Dauphine experience a myriad of ghostly activity. One man had his dog shoved down the stairs by an unseen hand — a spirit that hurts dogs? How evil does evil get? Others encounter strange smells, tapping noises, footsteps in their apartments, and disembodied voices. Some have even seen shadow figures in the corners of their homes.

Today, the palace is a private apartment, meaning that visiting is off-limits to anyone who doesn’t live there. Because of this, we suggest simply taking one of our top-rated New Orleans ghost tours. This way, you’ll learn all of the details about New Orlean’s most haunted locations without a trespassing charge. As for the Gardette-LaPrete House, its past remains a mystery.