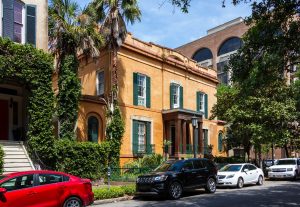 Atop Madison Square in Savannah, Georgia lies one of Savannah’s most historic houses. The city is chock full of haunted houses, streets, tunnels and cemeteries but the Sorrel-Weed House is one of the most infamous, and a local favorite. It’s made multiple cameos in movies like Forrest Gump and even the Today Show. The home’s claim to fame is its beautiful architecture, massive size and multiple hauntings.

The home was originally the residence of the Sorrel family. Francis Sorrel was an extremely wealthy plantation owner, though his life was dotted with tragedy and scandal. After the death of his first wife, Francis went on to marry his wife’s younger sister, Matilda. A scandal on its own. She then committed suicide after finding that Francis was having an affair with one of his slaves, Molly. A few weeks later, Molly was also found dead in an apparent suicide. Could this be coincidence, or did Francis have something to do with the deaths of these women?

The spirits of both Molly and Matilda have been reported to haunt the house to this day. Visitors experience a dark entity in the home and some even report feeling as though they are being choked. The darker hauntings could be caused by the spirits of the soldiers who died in the Siege of Savannah, which occurred nearby in Madison Square. Some even believe that there are remains buried underneath the Sorrel-Weed House.

The Sorrels were among Savannah’s most wealthy and influential families. Francis was a West Indian plantation owner, born in Saint Dominigue, now known as Haiti. A slave revolt in the area forced he and his family to flee the country, and he ended up in the United States.

Despite his upbringing, he became a slave owner himself. He opened a shipping company in Savannah where he and his business partner shipped butter, molasses, salt and cotton. They even took part in the slave trade. The company grew at an alarming pace, creating nothing but wealth for the Sorrel family.

Moxley Sorrel was Francis’ son. He fought alongside the Confederates in the American Civil War and rose all the way to the rank of Brigadier General.

The Haunting History of the Sorrel-Weed House

The Sorrel-Weed House was built in 1837 by famous architect Charles Cluskey. In the mid 20th century, it was one of the first homes in the historic district that was restored. The Historic Savannah Foundation made the Sorrel-Weed home their first exhibit, which they used to showcase the restoration work they intended to place upon other homes in the area. It was also one of the first sites to be named a historic landmark by the state of Georgia.

The home also made multiple appearances in pop culture, as the opening shot of the movie Forrest Gump. The building was showcased when the first scene was shot from the rooftop of the Sorrel-Weed home, showing Madison Square and the surrounding area. The home has also made its appearance on the Today Show as well as multiple ghost investigation shows like Ghost Adventures, Ghost Hunters, and Most Terrifying Places in America.

Suicides of the Sorrel-Weed House

Francis Sorrel married Lucinda Moxley shortly after his arrival in the United States. Lucinda came from a wealthy background who did business with Sorrel. Lucinda died just a few years after their marriage (a coincidence?) so Francis decided he would stay in the family and married her younger sister, Matilda.

The two enjoyed their marriage, bur Francis had little to no self control. He began to have an affair with Molly, one of his slaves. Francis even forced her to stay in her own room so that they could have privacy. Matilda soon found out about Molly and in a distraught and enraged state, she jumped off of the second-story balcony, landing head first. She died instantly upon impact.

Molly was overtaken by guilt. She knew she would be held responsible for the affair and Matilda’s subsequent death. Molly was found hanging by a noose in the home, having killed herself as well.

The Seige of Savannah

The Sorrel-Weed House sits just atop Madison Square, the very site of the vicious battle ‘The Seige of Savannah,’ during the Revolutionary War. American and French forces attempted to push the British out of Savannah, who had taken over the city just a year prior.

Forces were outmanned and outgunned. Men were dying, and fast. The Revolutionaries dug up a trench right at Madison Square to bury the bodies of their dead. Hundreds of Revolutionary soldiers died in the span of just a few weeks. Injured soldiers were thrown into the ditch alongside the dead and were buried alive.

After the battle, their bodies were never removed. Savannah just continued to expand around the original battlefield and many of the buildings in the area, including the Soreel-Weed House, were built right on top of the old burying ground.

Hauntings of the Sorrel-Weed House

As one of the most well-known haunted houses not only in Savannah, but in the world, the Sorrel-Weed House has a reputation to uphold. The spirits of Molly and Matilda are the most commonly reported. They are seen are dark apparitions walking throughout the halls of the home. Some visitors claim to have seen the apparitions of women in the mirrors throughout the home.

The spirit of Molly is said to haunt the home’s slave quarters. The space was once rented to a man who used it as his office, unaware of the history. He reported a constant sense of unease and the feeling of being watched. Other who enter the slave quarters report feeling nauseous or drowsy. Some even state they feel as though they are being choked with a thick rope.

Others report the sounds of parties and gatherings in the living room. The sounds of merriment stop as soon as someone approaches the room. A dark energy is said to occupy the home. This energy is said to be caused by the bodies buried underneath the home, left over from the Siege of Savannah. A similar energy hangs over the entirety of Madison Square as well. The sound of gunshots are often reported in the Square, especially during quiet nights.

The Sorrel-Weed House has bore witness to more than a few tragic deaths. Being built atop a burial ground surely adds a questionable flair to the history of the home as well. If one was to walk the streets of Madison Square and listen closely, the echoes of the tragic past could possibly be heard. The Sorrel-Weed House is just one of many of Savannah’s most haunted locations. For more haunted Savannah, check out our article about the Andrew Low House and the infamous Hampton-Lillibridge House.

To book your very own ghost tour and to explore the hallowed streets of Georgia’s oldest and most haunted cities, check out our website and book your tour today.