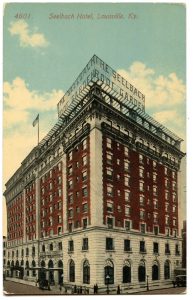 Home to some of the best ghost stories in the Bluegrass State!

The mystique and high strangeness of rural Appalachia have been well known throughout generations. Something about those misty mountains really sparks energy unlike any other found in America. The natural beauty of the state draws visitors from countless miles around. People flock to Kentucky to witness ancient caves at Mammoth Cave State Park, the vastness of Red River Gorge, and the rolling foothills of the Appalachian mountain chain. With so many tourists, lodging to match the beauty of the land is necessary! That’s where the Seelbach Hotel comes into play. Opening its doors in 1905, the Seelbach has been a mainstay of Louisville, Kentucky for generations.

If you’re up for a road trip and dying to know more about the ghosts of the Smoky Mountains, join us for a ghost tour in Gatlinburg!

Founded by Bavarian-born immigrant brothers Otto and Louis Seelbach, the hotel was envisioned to embody the old-world grandness of hotels in Europe, such as those in Paris and Vienna. Employing a French-Renaissance design was no easy task in a city such as Louisville, but the brothers succeeded and the hotel was known for its unique charm and architecture from the day it was constructed. Louis was already the proud owner of a restaurant in Louisville (a fitting name) when his brother emigrated from Germany around 1890 and joined him stateside. They formed the Seelbach Hotel Co. shortly thereafter and began construction on the famed hotel in 1903.

The Seelbach quickly gained a fabulous reputation and was even frequented by numerous names of fame such as Presidents Taft, Kennedy and Carter, The Rolling Stones, Whitney Houston, and Elvis as well as F. Scott Fitzgerald, who took inspiration from the Seelbach for the hotel mentioned in The Great Gatsby.

A Bit About The Seelbach Brothers

Otto and Louis hailed from Frankenthal, Germany, a small rural town in Bavaria. Louis arrived in Louisville in 1869 at the young age of 17. He worked for others until he turned 22 when he realized he had greater ambitions and wanted to own his own business. That same year, he opened the Seelbach Bar and Grill and quickly turned his ideas into a flourishing enterprise. This success allowed Louis to bring his brother to America to help open the first Seelbach Hotel in 1891, just above the bar and grill that started it all!

The brothers were intent on building the grandest hotel in Louisville, a hotel that reflected those of the ones in their home country. They purchased a piece of property at the corner of 4th and Walnut, broke ground in December 1903, and opened the doors just in time for the Kentucky Derby in May of 1905.

An immense 25,000 people showed up to the opening of The Seelbach Hotel, and the hotel hosted a gala that evening with dinner parties filling each of the 150 rooms. An overnight success, one would say!

The hotel hosted countless patrons in the first two years, and on January 1st, 1907 the second phase of the hotel was put into place, and expanded the hotel from 150 rooms to 500 rooms. In 1925, Louis passed away. This created a need for new management of the Seelbach Hotel Co. On April, 1st, 1926, Chicago businessman Abraham M. Liebling bought the hotel for $2.5 million. The hotel passed hands a few times before it ended up belonging to Sheraton, with that deal putting the Seelbach Hotel as part of the second-largest hotel sale in all of U.S. history. Eventually, Hilton gained ownership of the Seelbach, changing its name to The Seelbach Hilton, which it remains today. The hotel is now on the National Register of Historic Places, and is lovingly called ‘Louisville’s Historic Hotel.’

More infamous names also frequented The Seelbach Hotel, wreaking havoc and bringing negative energy to stay. Lucky Luciano, Al Capone, and Dutch Schultz are just a few of the visitors who came to The Seelbach’s Oak Room to play illegal poker games. One story from the 20s even tells of Al Capone sneaking out of a series of tunnels and secret stairwells when the Louisville Police broke up one of his power nights. There’s even a room dedicated to Capone at the hotel!

Hauntings at the Seelbach Hotel

Kentucky is filled to the mountaintops with history, The Seelbach is one of Louisville’s haunted crown jewels, with many of its stories being told since its opening in 1905. The most famous story told at the hotel is that of the Lady in Blue.

The Lady In Blue’s Story

A woman named Patricia Wilson was at the Seelbach to meet up with her husband, but his life ended suddenly when he was killed in a car accident on the way to the hotel. A short time after the news broke to her, she was found dead at the bottom of the elevator shaft. It’s not clear if this was a suicide or just another tragic accident, but guests claim that she never checked out. There are reports of a woman in blue with long, dark hair walking the halls of the hotel, possibly still waiting for her long-lost husband to arrive to meet her.

Aside from the Lady in Blue, the hotel is home to many other spirits. The staff of the Otto Cafe reported seeing an older woman in raggedy clothes peeking from behind the mirror. When employees turned to talk to the woman, but she had already disappeared. More recently, in 2004, a couple who was staying at The Seelbach booked a room on the 8th floor for their honeymoon. They awoke to find a strange man standing by the window and looking out onto the city. The temperature in the room also dropped quickly after they saw him.

Other ghostly sightings include sightings of apparitions in hotel mirrors, disembodied voices, the faint scent of perfume, unexplainable footsteps among other chilling accounts.

The hotel is home to some of Louisville’s oldest bars and restaurants, and with ghosts and gangsters, it’s no surprise that The Seelbach Hotel is considered one of the most haunted spots in Kentucky. This grand hotel is worth a visit for its over-the-top architecture and furnishings, as well as the reported apparitions and unexplainable experiences. The Seelbach Hilton has a truly fascinating, and kind of seedy history, and it continues to have the same appeal from its conception. Have you ever visited The Seelbach? We hope that this article has opened your eyes to the infamous history and intrigue of this Bluegrass mainstay!

For more haunts in Kentucky, check out our article about Liberty Hall!