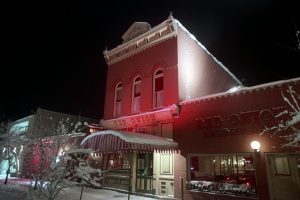 The Red Onion is one of the most haunted places is Colorado, and surely has the most unassuming name out of the bunch! From a murdered madame, a knife fight between employees, to barroom brawls galore, the Red Onion is genuinely an establishment that perpetuates the phrase ‘if walls could talk.’

The Red Onion was established in 1892 by a man named Thomas Latta, and the restaurant began its days as a saloon. It was formally known as the Brick Saloon but was referred to by locals as the Red Onion due to the color of the brick. Allegedly the upper floors were used as a brothel, adding to the dark history and intrigue of the entire establishment.

History of the Red Onion

Aspen, Colorado, where the Red Onion is located, was established during the Colorado Silver Boom. Like many mining towns of its time, the city snowballed in population and reached nearly 10,000 residents by 1890. Two years after, Councilman Thomas Latta bought the building that would later become the Red Onion and opened it as a gambling hall and saloon. The bar was christened as the ‘New Brick Saloon’ at its opening, however, old-timers in the area had their own ideas about what to call it. The red bricks it was built with and the unique-ness of the property led it to be called the ‘Red Onion.’ There’s no buildings like it anywhere else in Aspen, and the storied past is one for the books. To understand just how strange the Onion is, we must go back to its roots and meet its creator…

Thomas Latta and his family hailed from Greenburg, Pennsylvania. They were a proper family, so proper in fact that you needed a calling card to give to their butler when you visited. Thomas was a free-minded and wild entrepreneur, the black sheep of the family. His ideas led him out west like a wayward tumbleweed to find his own fortune as so many others did. He ended up creating the popular Red Onion as a dancehall, gambling saloon, and brothel.

Interestingly enough, Thomas was an alderman, or councilman. He didn’t let his political background stop him from enjoying the spoils of the Red Onion or whatever the Wild West had to offer him.

The Popularity of the Onion

The saloon grew to be one of the town’s most popular nearly overnight. It was only one of three eateries in the entire area. However, the goings-on and things allowed made the Red Onion the most popular of all. It’s patronage in those early days were local men and miners.

After the silver boom crash, it managed to stay open even throughout Aspen’s ‘quiet years.’ People had moved away during this time and the economy began to collapse. Some homes and buildings were even left vacant and neglected, while others were just burnt down. The Red Onion kept its doors open and survived this low time. With countless stories already under its belt, the next life of the Red Onion came in 1918 when it was purchased by Tim Kelleher. He kept the Onion in operation throughout prohibition by selling sandwiches.

Interest was shown in the Alpine ski area in the 1930s, but the sport was held off on until after World War II. When the war finally ended, a veteran named John Litchfield of the Army’s 10th Mountain Division bought the Red Onion in 1946.

After it switched hands once again, the Red Onion was the only one left standing on that street a year later. With now just seven-hundred residents, Aspen was pretty much a ghost town. Of course a honky-tonk saloon was the hub of the city!

in 1947, Aspen opened its first ski resort and built the world’s longest ski lift. Soon, it became the first U.S. state to host an international competition and its reputation continues to flourish today.

After completely renovating the Onion, John Litchfield reopened the restaurant in January of 1947. He had the name formally changed to the Red Onion, honoring all of those wild west men that came before. The Onion began to host musical performances and shows as well.

As Apen’s ski resort grew in popularity, so did the Red Onion. In the early 1950s, the Onion changed owners yet again and was purchased by Werner Kuster and Arnold Senn.

Kuster brought the Onion back to its original glory, and added big-name performers to the set list like Louis Armstrong, Billie Holiday, and Freddie Fisher. In the 1970s, John Denver sang his hit country song ‘Take Me Home, Country Roads,’ for the very first time at the Red Onion, and he continued to perform there throughout his career.

Lady Day and the Red Onion

Billie Holiday was a well known blues, jazz, and swing music singer known for her amazing vocal delivery. Her friend and partner Lester Young gave her the nickname ‘Lady Day.’ Young was a well known saxophone and clarinet player. He and Holiday became friends when Young was a boarder in Billie’s mom’s home.

After her turbulent childhood, Billie took to singing in nightclubs in Harlem. Producer John Hammond heard her performances and recruited her, after that, her professional and personal life started on its rollercoaster ride of stardom.

In the late 30s and 40s, Billie’s life was tormented with alcohol and drugs to the point of arrest and prison time. She lost her permit to perform in New York, but continued her music career. Although Aspen was not the hot spot of her time, Holiday accepted the booking to perform at the Red Onion for two nights when Aspen was hosting its annual Winter Festival.

Aspen locals remembered that year not only for the success of the ‘Winterskol,’ but also for the riveting performances by Billie herself.

Sadly, Holiday succumbed to her addictions at the age of forty-for in 1959.

The Haunted History of the Red Onion

The Red Onion is said to have nine lives, each filled with more intrigue than the last. Changing hands over the decades, many stories of ghostly happenings have begun to surface, leaving visitors today in wonder of who these spectral patrons may be.

In the 1970s, William Doyle Dean and Billy Joe Richards were two chefs employed by the Red Onion. They lived above the restaurant, sharing all of their time together. One evening during their break, the two got into a heated argument and Dead grabbed a large kitchen knife, stabbing Richards in the chest. The fight began in the kitchen but ended up traveling out to the alley behind the restaurant. Billy Joe Richards died in a pool of blood on the ground and William Doyle Dean was arrested for murder and sent to prison.

About a decade ago, a women hired to clean to bar in the mornings kept having experiences where she would see footsteps on her freshly mopped floor. After re-mopping, the footsteps would appear again and again. She also reported seeing a man in the back of the kitchen out of the corner of her eye. Could this possibly be the spirit of the murdered Billy?

Although no official records of the account, stories have been passed down for over a century about a Madame that ran the brothel in the upper levels of the Red Onion being brutally murdered. Some claim to have seen a woman of the era hanging around the bar.

A bouncer for the bar reports being alone in the building on several occasions. When he would go down to the basement for supplies to restock the bar, he would hear someone walking around upstairs. Quickly running back up to the main floor to see who it was, he would find the bar empty.

Could it be the Madame downstairs for a drink to scope out potential customers for her illicit business?

If Walls Could Talk

With over one hundred years in existence, the Red Onion was once filled to the brim with entertainment, celebrities, and cowboys. The tragedies that occurred at the Onion have left their mark, that darkness echoing throughout the ages and creating the haunted establishment that Aspen residents know and love today.

Read more about the 10 top haunted places in Aspen, Colorado, and see how the lives and stories are intertwined from the pioneer days to today. If you are ever in the area, plan one of our ghost tours. You can even book a virtual tour from the comfort of your own home!