The Oregon Vortex and House of Mystery 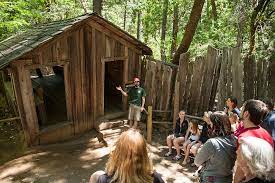 The Oregon Vortex is a historical Americana roadside attraction that first began welcoming guests in 1930. It’s located on Sardine Creek in Gold Hill, Oregon. A picturesque landscape with lush forest, the Oregon Vortex has been delighting and mystifying visitors since its inception. The ‘vortex’ consists of a number of interesting effects, which are thought to be nothing more than gravity hill optical illusions. However, the attraction’s owners swear they are a result of unexplained properties of the area.

Dare to experience the unexplained of the west for yourself? Take a visit to this vortex of mystery or book a ghost tour with us to live the hauntings of America up close and personal!

Local legend in the area states that prior to any sort of construction in the area, Native Americans referred to the land as ‘forbidden,’ and travelers that were passing through would experience strange behavior from their horses as they refused to enter the area.

The story goes that a gold assay office was constructed there in 1904 by the Old Grey Eagle Mining Company. The office ended up sliding from its foundations in the early 1910s, coming to a rest at a very odd angle. The building resembles other ‘distorting rooms’ like the Santa Cruz Mystery Spot. In 1914, the assay office were rediscovered by a gold prospector named William McCollugh. He soon convinced his friend, John Litster, who was a geologist and engineer to come from Scotland and research the strange phenomena in the area.

Litster ended up developing the area and opened it to the public in 1930. He conducted thousands of experiments within the vortex until his death in 1959.

After Litster’s death, his wife sold the Oregon Vortex to Ernie and Irene Cooper. Their daughter has kept the attraction open since then. It’s one of Oregon’s oldest examples of a western roadside attraction.

Skeptics of the vortex report that Litster was just a con-man, looking to make a quick buck off of tourists. But it seems unlikely, the Orgeon Vortex and Mystery House is in a terrible spot for enterprise — it’s off a wooded hillside on a narrow and dangerous road in the middle of nowhere — not a real prime location for tourism!

Litster’s ‘Notes and Data’ booklet attributes the strangeness of the location to warped atoms, electromagnetic energy, even a subterranean super-machine left behind by prehistoric aliens. Despite Litster’s best efforts, the powers at play at the vortex remain a mystery, Some visitors have even stormed off because the vortex challenges their beliefs on how the world works.

What is a Vortex?

According to the Oregon Vortex website, a vortex is explained as follows:

pA vortex, essentially a whirlpool of force, is the basic form of our universe. From our galaxy, whose vortex form we see as the countless suns of the Milky Way, throughout the gravitational vortex of our solar system, down to the vortex of an atom, the vortex form recurs throughout our world structure. The Phenomena that gives The Oregon Vortex its name are evident throughout the entire area. Nowhere in the circle do you normally stand erect. Inevitably the visitor assumes a posture that inclines toward magnetic north. The corona of The Vortex, as well as the minor vortices, discovered during the continuous study of The Vortex, are among the unique phenomena to be observed here.

Phenomena of the Oregon Vortex

“It’s a place that doesn’t make any sense” states the longtime manager of the vortex, Elena. Bottles defy gravity and roll uphill, brooms balance in their handles, photographs show unseen beams of light and orbs, back pains disappear, people become seasick at the landlocked mystery house, and a person’s height grows and shrinks — and people feel that transformation happening.

Multitudes of strange happenings occur at the vortex. Odd angles create the illusion of objects seemingly rolling uphill against the force of gravity. Some researchers explain away the phenom of the mystery house at the Oregon Vortex with science, stating that it’s nothing more than a wonderful optical illusion. Two UC Berkeley researchers once investigated a similar location called the Santa Cruz Mystery Spot and said that both locations could be explained by ‘orientation framing’ which describes how the brain’s visual processing uses spatial frames of reference.

Owner Maria Cooper states that while the happenings inside the house are the result of optical illusions but insisted that something unexplainable was happening outside the hoe that made people’s height appear to grow and shrink depending on their location.

The Oregon Vortex is famous for its ‘height change’ as the appearance of the height of two people varies depending on where each person stands. Some believe that the distorted backgrounds induce a forced perspective,

One corner inside of the Mystery House is believed to be a portal to the other side. It’s believed that if you toss a belonging into the corner it will end up in the ‘sixth-dimension’ with otherworldly beings.

So, is the vortex simply a monument to over 80 years of suggestion and illusions, or is there something really unusual about the area? Could there be a real scientific basis for this ‘force-field?’

“Nowhere in the circle do you normally stand erect. Inevitably the visitor assumes a posture that inclines toward magnetic north….as another person, on a level platform, recedes from you towards magnetic south, they appear taller. When they approach you, coming towards magnetic north, they become shorter. This is contrary to the laws of perspective, as we know it, and must be seen to be believed.”

The Oregon Vortex and Mystery House continue to be one of the Pacific Northwest’s crown jewels of high strangeness. Visitors from all over the country and even the world flock to the vortex to experience it for themselves. The owners of the attraction even welcome in skeptics with open arms — they invite whoever visits to try and solve the mystery once and for all. So far, no one has for sure!

Have you ever visited the Oregon Vortex and Mystery House? Do you think there’s a portal there that’s causing all of the decades of unexplained phenomena there or could it just all really be an optical illusion?

For more hauntings of the west, check out our article about New Mexico’s Hotel El Rancho!