The Marshall House – The Oldest Operating Hotel in Savannah 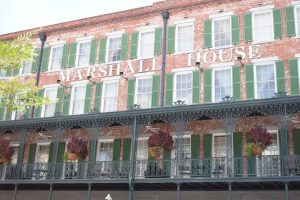 Said to be home to some of Savannah’s friendliest ghosts, the Marshall House is a historic building located on East Broughton Street in Savannah, Georgia. As the city’s oldest operating hotel, the building is host to more than just a few resident specters who are waiting to show you the true meaning of southern hospitality!

Opened in 1851 by Mary Magdalene Leaver Marshall, the Marshall House was one of Savannah’s very first. Today it boasts the title of ‘Oldest Operating Hotel.’ Owned and operated by HLC Hotels Inc, which also owned the Olde Harbour Inn, the Eliza Thompson House, the East Bay Inn the Gastonian, and the Kehoe House (another haunted gem of Savannah).

During the American Civil War, the Union Army occupied the Marshall House for a couple of years in 1864-1865. The troops were led by General William Tecumseh Sherman and the building was used as a Union field hospital for wounded soldiers.

Ralph Meldrim was the proprietor of the House in 1857 when he constructed an impressive twelve-foot-high veranda onto the front of the second floor of the building. A decade later, the Marshall Hose Company, Savannah’s volunteer fire department, was founded to protect the Marshall House specifically as well as other properties in Savannah.

The Florida House, a property that adjoins the Marshall House, became part of it in 1880. The hotel closed for renovations from 1895 until 1899, when it reopened its doors to the public boasting electric lights as well as hot and cold plumbing on every floor, a rarity for the time.

Mary Marshall owned the property until 1914 until 1933 when Herbert W. Gilbert leased it and changed the name to the Gilbert Hotel. Gilbert sold the hotel in 1941 and it was a catch on the market. The hotel had a lobby, dining room, living room, reading room, sixty-six guest rooms, one suite, an apartment, six storage rooms, as well as the hot and cold plumbing on each floor.

Even with all of the amenities, the Marshall House closed in 1957 due to a struggling economy. The upper three floors were left abandoned, and the ground floor was used by various business owners until 1998. Once the last shopkeeper locked the door behind them for good, the building lay alone.

Not for long, however, because only a year later the building was restored and reopened as Savannah’s oldest hotel. Original parts of the structure still exist today, holding with them imprints from the building’s past. These include the pressed brick from Philadelphia, Savannah grey brick throughout, staircases, wooden floors, fireplaces, and doors to each and every guest room. One can only imagine the energy and occasions these materials bore witness to.

A Bit About Mary Marshall

As you enter the lobby, an oil painting of the Marshall House’s original owner can be seen hanging proudly. Mary Marshall was a prominent Savannah figure throughout much of its history. She was born during the final year of the American Revolution, and died at the age of 93 during the last days of Reconstruction in the south. At her death in 1877, she was loved and considered very successful in Savannah’s social and financial circles.

During the Revolution, Mary had relatives on both sides during the Seige of Savannah. Her father, Gabriel Leaver acquired several choice properties in Savannah before his death in 1795. Mary inherited her father’s wealth and she used it to continue the buy and develop land, growing her own wealth tenfold.

Hauntings of the Marshall House

Savannah is well known as the oldest city in Georgia, and with that comes loads of history, heartbreak, tragedy, and death. Mant of the historic properties in the city have reported ghosts, and visitors to Savannah even claim that no matter where you go within the city, spirits aren’t far behind.

The Marshall House and its staff are well-read on their reputation for hauntings. Ghostly encounters include flickering lights, electronic items powering down mysteriously, overflowing toilets, and even disembodied voices that echo throughout the building. The fourth floor, however, is known for its loud bangs and crashes. These noises happen in the early morning hours, just as the sun is peeking above the horizon, and is reported to sound like huge anvils dropping onto the historic wood floors below. Door knobs are also turned by unseen hands on this floor.

Guests report that room 306 is especially haunted. This room is well known for a ghost cat, which may seem like a pleasant phantom to have around, until you learn that the ghost cat is usually a prerequisite to a strange shadow figure that overtakes the room, reaching the ceiling and scaring the daylights out of whoever may be sleeping in the bed.

Mary Marshall herself is said to haunt the Marshall House, as she’s been reported as a full-bodied apparition that wanders around the halls and front doors.

The phantom sound of an old-fashioned typewriter is also common. This noise comes from the former room of author Joel Chandler Harris, who was a resident at the House while he was penning his Uncle Remus stories. Could Joel’s spirit still be typing away into the late hours of the night as so many writers are known to do?

Other reports include a well-dressed man who’s see-through, a woman in white peering out of the upper-floor’s windows, and a ghostly woman who is heard and seen in the women’s restroom — she is even known to unlock the bathroom stalls!

Ghost kids! It sounds straight out of a nightmare, but the ghostly children of the Marshall House are some of the friendliest around. They’re heard laughing, playing, and carrying on throughout the day and night. Sometimes they’re even see skipping and playing games in the hallway, only to disappear when you call out to them.

During the evening hours, the sound of bouncing balls and marbles are reported. Guests have even come out of their rooms at midnight due to the sound of what they think is a huge family in the hallway — alas, they open their door to a desolate nighttime hotel hall, no children, no toys.

Spirits of the Civil War

Of course, since the Marshall House was used as a field hospital and burial ground for soldiers who didn’t make it, it’s not a surprise that spectral soldiers are reported at the house. On numerous occasions, guests have told of sightings of amputee soldiers who walk aimlessly around the hotel. One of these apparitions has even been seen begging guests to help him find a doctor, missing arm in hand.

Staff report a foul odor, almost that of rotting flesh, that eminates from the hotel’s bones. rooms 214, 314, and 414 being the most active in this regard. Staff has tried every deodorizer and spray known to man, but the smells only disappeared when the hotel held a blessing ceremony for those that died here.

In what used to be the old operating room, guests have felt an entity holding onto their hand or wrist, like a nurse would do to find a pulse of a patient. Another report tells of a shadow-man who shouts at guests to get out of his room.

Plenty of avid ghost hunters and ghost enthusiasts seek out The Marshall House for their stay in Savannah — and it’s no surprise, the spirits here are as active as the southern summer is long. For more southern-style haunts, check out our article about the Union Station Hotel in Nashville!