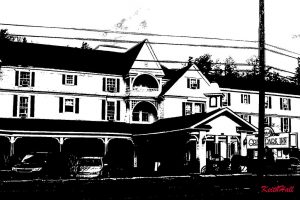 With a particular concern for the comfort of its guests, the Green Park Inn was founded and designed by a group of three businessmen from Lenoir, North Carolina. They were led by Civil War veteran Major George Washington Findlay Harper. The hotel first opened up to guests in the summer of 1891. The hotel’s mission was promoted in a brochure that was released in 1892, stating that the hotel was constructed in hopes of providing the area with a more comfortable summer home.

Now an official member of the Historic Hotels of America and on the official list of the National Trust for Historic Preservation, the Green Park Inn shares its haunting history with all who step foot inside.

Want to experience the hauntings of America’s eastern mountains up close and personal? Join us for one of our Tennessee ghost tours in Nashville or Gatlinburg!

The original structure spanned just over 73,000 square feet on an acreage then known as Green Park, hence its name. It’s located in the community of Blowing Rock, which, at the time, was a small village tucked away within the bosom of the Appalachian mountains. It is considered one of the most revered getaways in North Carolina and has been since its conception. The businessmen from the city of Lenoir had developed this magnificent hotel through their development firm, The Green Park Company. With the help of General Harper, the men selected the area based on Harper’s suggestions, since the region was known for its tranquil beauty.

They chose a plot of land near the celebrated geographical landmark called ‘The Blowing Rock’ and they molded a retreat out of some of the rarest wood in the country, American Chestnut and Heart Pine. All of that wood remains intact to this day, holding the energies of days gone by.

In April 1891, the Lenoir News let the public in on the construction of the inn, writing that it would feature sixty guest rooms furnished with running water, fireplaces, and electric alarms. The original building had three levels, a restaurant, and a bar that is still present to this day. The inn also boasts a bowling alley, shooting gallery, post office, and billiard room. The inn quickly built a reputation for its world-class hospitality. Hundreds of guests began to reserve rooms at the hotel, fascinated by its modern amenities and sereneness. Powerful and wealthy statesmen and industrialists began to call The Green Park Inn their summer home, sitting around together on summer eves, contemplating their businesses and smoking expensive cigars.

The Green Park Inn continued to house the only US Post Office in the area for years, and it now keeps a portion of the very first sorting system in the History Room of the inn. Throughout history, the inn has welcomed many famed guests such as Annie Oakley, John D. Rockefeller, Eleanor Roosevelt, Calvin Coolidge, Herbert Hoover, and even Margaret Mitchell, who wrote a portion of ‘Gone With The Wind’ during her stay at the inn.

During the later part of the Civil War, a small fort was built on the site of Green Park by Federal Troops.

These days, the inn has 88 guest rooms and a few event spaces, as well as a bar, restaurant, fitness center, library, and tea room. Much of the history has been painstakingly preserved. The new owners worked extensively with the Blowing Rock Historical Society and the State Historical Preservation authority in order to retain the charm, character and historical integrity of the property. In 2016, the inn celebrated its 125th anniversary as well as the milestone for the state’s second-oldest operating resort hotel. It is also the last of the ‘Grand Manor’ hotels that are still in operation in western North Carolina. In 2018, the Green Park Inn joined the rank of several other historical hotels, including the Crescent Hotel.

Behind its picturesque facade, an unsettling history writhes. Recently, The Washington Post named the Green Park Inn one of the top 13 most haunted hotels in the United States. What has earned it such an honorable name? More than a few stories explain the title!

As the story goes, the daughter of the Green Park Inn’s founder, Laura Green, died in Room 318 after her husband-to-be left her alone at the altar. Green was to be wed at a little church in Blowing Rock. However, her fiancé didn’t turn up to their wedding, leaving her completely heartbroken and humiliated in front of their guests and family. Devastated, she hung herself in Room 318.

Guests report seeing the apparition of a woman in a wedding gown strolling up and down the hallways on the third floor. The sounds of children is also heard, even though no reports exist of any tragedies involving children occurring at the inn.

The hotel even has a ‘ghost log’ for visitors to look through or report personal encounters.

“We respect the privacy of all of our guests, whether or not they’ve ever checked out.”

While the hotel doesn’t promote their hauntings, it’s something that the guests just can’t ignore during their stay.

The hotel has also hosted numerous ghost investigators, who have all concluded that the inn is haunted by the spirits of former guests. They reported shadow figures disappearing into walls, disembodied voices, and electronics powering down on their own.

We spoke to a former guest of the Green Park Inn, who stayed here with her family in the summer of 2017. When we questioned her about her stay, the first thing she shared was how spooky the entire inn was. She told us,

“There’s just an air of mystery at the hotel, and as a mother and a newlywed, i really felt a heaviness here. Before I knew about the history of the woman who died here, I remember feeling devastated and heartbroken for no reason. I was also angry with my husband for a few days, and I couldn’t figure out why I was having these feelings.

Throughout our stay, we discovered the story about Room 318, and suddenly all the puzzle pieces connected. I thought, maybe I was feeling the emotions that were left over from Laura Green, the bride who was left at the altar. It’s not out of the question!

We also witnessed strange shadows that darted across the hallways as we walked down them later in the evening. What truly surprised us was the ‘ghost book’ that is left for guests to fill in their paranormal experiences… I’ve never stayed at a hotel that was so open about their ghostly activity.”

A visit to remember, to say the least! Have you ever stayed at the Green Park Inn? Did you experience any strange happenings during your stay?