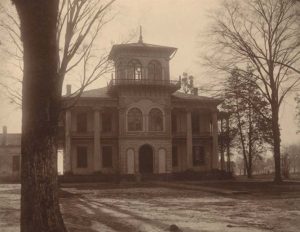 The Drish House: a Love Story

If you look inside the tower of this old Tuscaloosa home, you might see some candles burning long into the night –– and not because someone’s hard at work studying. Rather, you might see Mrs. Drish mourning her long-lost husband. Dr. John Drish was a notorious gambler and alcoholic, and it was the alcohol that led to his tragic death one night in 1867. Mrs. Drish placed lit candles around his casket and told her servants she wanted the same candles placed around her casket when she died. 17  years later, when that day came, the candles were nowhere to be found.

A short time after her funeral, a local called the fire station to report a large fire in the Drish House tower. When they arrived, nothing was burning. The phantom fire has appeared several more times over the years.

The Terrors of Heights

Old houses are scary –– they just are. Think about it: you’re going up the stairs, and they squeak, and you don’t know what to expect when you reach the top. Or maybe you’re on your way down when you “accidentally” lose your balance or are pushed down. Suddenly the rails fail you and everything goes dark for the last time.

If you’re one of the many people reasonably scared of heights, lighthouses are even worse, especially if they overlook some barren waters. The St. Augustine Lighthouse, for example, sends shivers down our spine. Someone who used to work there was once chased down the 219 stairs of the building by a malevolent force dressed in blue –– at least he got his cardio for the day! And, of course, knowing how many people perish at sea doesn’t help make the lighthouse any warmer.

The Origins of the Drish House

The Drish House has a very rich history. Calling it a house is like saying a tiger is a cat. Sure, maybe, except the Drish House is a humongous, stuccoed brick mansion that once presided over a 450-acre plantation. The place was built in 1837 for Dr. John Drish and his wife, Sarah Drish, and served as the physician’s practice for decades…who knows if any patients died during a check-up.  Dr. Drish lived on the property until his tragic death in 1867, reportedly from a mysterious fall down a stairway that many attribute to his alcoholism. But some believe Dr. Drish sensed something sinister since he randomly started making funeral plans and asked to be surrounded by candles as he lay in state upstairs.

In 1884, when Sarah passed away, the Drish House changed hands for what would be just one of many times. The property first became the Jemison School after the Tuscaloosa Board of Education became the proprietor in 1906, and then a warehouse in 1925 when Charles Turner bought it. From 1940 until the end of the 20th century, the Drish House changed owners yet again, this time to become part of the South Side Baptist Church.

Despite its change in function over the centuries, from private residence to school, warehouse, and later even a church, the Drill House is still very much a home –– or at least that’s what their ghostly occupants insist on believing. The Drill House may be re-invented time and time again, but the Drish House will always be home to its first family.

Ghostly Activity at the Drish House

The Drish House has built a reputation over the years as a sinister, haunted location. So much so that today people from all over the country visit the property in hopes of being spooked by the strange activity they have heard about. One of the many things people have reported experiencing, for example, is hearing faint footsteps around the home.

Perhaps the most haunted spot in the building is a bathroom where many interesting things have been observed. Some visitors claim to have seen a mysterious figure by the window, as well as a rush of cold wind when the door is opened. It is also near this very bathroom where other guests have reported smelling a floral scent attributed to the Drishes daughter, Katherine, who was apparently into gardening.

Most sinister of all, however, are the reported fires seen from outside the residence. Many people have seen a fire break out in the third-story tower, as well as ghostly lights coming out of the house. The backstory is that Sarah Drish wanted to be buried with the same candles that were used when her beloved husband died, but when she passed away no one could find them. Many people believe that the fire that people see is Sarah lighting the candles she wanted at her funeral, the poor thing driven to madness and desperation in the afterlife.

The Drish House is a tragic love story, a cautionary tale about the dead and their unfulfilled wishes. Perhaps Sarah’s ghost continues to haunt Drish House because she was not surrounded by her husband’s candles on her deathbed, maybe she can’t move on with her life. The poor widow has decided to light the candles herself –– and we as awed spectators are paying the price.

Want to learn about another entirely way too spooky home? Check out our article on the Andrew Low House in Savannah!