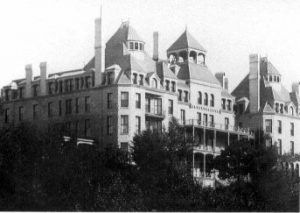 America’s Most Haunted Hotel? You read that right. The Crescent Hotel is considered to be the most active hotel in regards to ghostly happenings in the entire United States. With countless reports of ghostly activity all across the Crescent, you’d have trouble finding a corner of this hotel that isn’t haunted. As always, to understand the hauntings here, you must delve deep into the veins of its history.

The History of the Crescent Hotel

The Crescent Hotel was constructed in 1886 in Eureka Springs, Arkansas, and was designed to be a resort for the rich and famous, Hollywood’s playground, so to speak. It quickly became too much to manage, which is no surprise considering its size. With 78 rooms spread across 4 floors, the Crescent is no small lodging. After falling into a state of total disrepair, it reopened in 1908 as the Crescent College and Conservatory for Young Women. The institution closed down in 1924 and reopened in 1930 as a junior college. After the close of the college in 1934, it was leased as a summer hotel.

The hotel fell in the hands of a new owner, Norman G. Baker, in 1937 when he turned the hotel into a health resort and a hospital. Baker was a millionaire inventor and radio personality who styled himself as a doctor even though he had not a lick of formal medical training. He claimed he had discovered a cure for cancer, and also backed attacks on organized medicine, which he said was profit-driven and completely corrupt.

He had been practicing medicine in Iowa without a license, and when the residents there found him out, he fled to Arkansas with the cancer patients he was treating. He advertised the Crescent as his new health resort, designed to cure visitors of various ailments just by drinking the natural spring water of the area.

The law finally caught up with Norman when federal charges were filed against him in 1940 for mail fraud. He spend four years in prison, leaving the Crescent alone and ownerless until 1946 when it was purchased by John R. Constantine, Herbert Byfield, Herbert Shutter, and Dwight Nichols. They wanted to restore the hotel into its former glory, bringing back the stars and starlets of Hollywood to come and play once again.

Their dream did not come to fruition, as on March 15th, 1967, the hotel was nearly burned to the ground. After the fire and nearly 30 years later, the hotel was purchased again for close to 1.5 million dollars. It received a massive restoration and renovation. The Crescent was listed on the National Register of Historic Places in 2016, securing it a spot in Arkansas history for years to come.

The hotel has a rich and fascinating history. There is even an archive of the history located on the hotel’s fourth floor, giving guests the ability to delve into the history during their stay.

A truly unique aspect of the hotel, the Crescent cats are a mainstay and their gift of hospitality has been exciting guests since its start. There has been many a resident cat during the hotel’s history, but it wasn’t until 1973 when hotel records started to talk of an orange tabby named Morris that walked into the lobby and never departed — for 21 years!

Morris became such a fixture of the Crescent that he was referred to lovingly as the ‘general manager,’ and was loved immensely by hotel employees and guests. To further prove the depths of affection that Morris received and what he meant to the community, when Morris passed away, more than 300 people attended his farewell ceremony and wake held at the hotel. He is buried on the hotel property, and visitors can step just outside onto the east lawn to see Morris’ headstone. His photo is also located in the hotel lobby as well as a remembrance poem.

The extent of the ghostly activity at the Crescent is astounding. Some believe the hotel is a portal to the ‘other side,’ while others continually come back to visit the hotel to experience its otherworldly activity. When the latest owners, Marty and Elise Reonigk, bought the hotel, they knew of the unexplainable reports and the hotel’s haunted reputation. They even hired a couple of certified mediums to do a reading of the building, and the mediums reported that the hotel was a portal, and is a dimension that holds spirits of the dead.

Why did the mediums report such an astonishing claim? Many believe it is due to Norman Baker and the patients he treated. As stated above, with his lack of medical training, countless patients died under his ‘care.’ The apparent ‘portal’ in the Crescent is said to be located on top of what used to be the morgue of the makeshift hospital.

To name just a few of the other hauntings at the Crescent, we’ve compiled them into a list which you can peruse below!

– In Room 218, the spirit of an Irish stonemason is said to reside. He fell to his death at the hotel.

– A cancer patient named Theodora is reported to be seen fumbling for her keys outside of Room 419 as well as tidying up the rooms for guests when they leave for the day.

– A couple named Richard and Mary Breckenridge passed away in the hotel due to complications from appendicitis. Their four-year-old child, Breckie, is seen throughout the hotel bouncing a red ball.

– Dr. John Freemont Ellis, the hotel’s in-house doctor during the late 19th century is seen in his office, which is now Room 212. His cherry pipe tobacco is one of the first signs that he is nearby, so if you visit the hotel, keep your eyes and nose open!

– Morris, the famed feline is regularly seen and heard meowing and playing in the hotel lobby and halls. Frequently, guests who dont know of Morris’ history will report a loose cat to the front desk, in which they are informed that they just saw a ghost!

Many ghost researchers and investigators believe that limestone has a special ability to absorb and release electromagnetic and psychic energies. Crescent Mountain, the hillside that the hotel sits upon, is made up of mostly limestone.

The massive, eighteen-inch thick stones used for the construction of the Crescent Hotel are made of limestone as well. This is believed to be the reason for the multitude of ghostly reports that come out of the hotel to this day.

A frequent phenomenon happens on the 3rd floor where the hotel connects to an annex that was used during the hotel’s tenure as a hospital. This area is said to be where the portal is located. Multiple guests report faintness, passing out, and temperature changes at this location with no know explanation. Guests will suddenly fall pale, fainting. Recovery is immediate, usually, but it does further substantiate the ghostly claims of the hotel and its connection to the other side.

There has been an uptick of activity at the hotel since the discovery of something truly stomach-turning — hundreds of Baker’s glass bottles labeled ‘secret formula’ as well as jars containing medical specimens that had been surgically removed from former patients. This had basically created a makeshift graveyard. A dark and ominous figure has been recently reported roaming around the former morgue and there has been an increase of physical touch by unseen hands.

As one can see, the reports go on and on, and on. A quick dive into the internet will tell of throes of other reports from hotel guests. If you find yourself in Arkansas, consider a night’s stay at this historic lodging and take your chances at experiencing something truly out of this world.