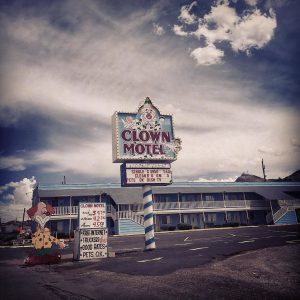 What do you find creepiest? Clowns, ghosts, cemeteries? How about all three of them — at once! Cue Tonopah’s Clown Motel and Miner’s Cemetery. A once booming mining town, Tonopah’s excitement died down due to the typical highs and lows that most mining camps experienced in those days. These days, the small desert town has just 1,200 residents — not all of them earthside.

Tonopah owes its existence to a wayward donkey that during the night, led prospector Jim Butler to search for it. The animal found shelter in a rock outcropping where Butler ended up picking up a rock. He noticed it was extremely heavy for its size, and Butler soon found out that the rock came from the second richest silver strike in Nevada’s history. Soon after, he began to mine the area.

To begin to understand the history and hauntings of the Clown Motel, we should start by explaining the history of Tonopah and what leads the land to be so dang haunted.

Nevada is home to countless haunted towns, ghost towns, and spooky spots. Take a tour with us on our Las Vegas ghost tour to get to know the haunting history of Sin City first hand!

Founded in May of 1901, Tonopah Cemetery began with its first burial of John Randel Weeks. It remained an active burying ground until spring of 1911 when the number of bodies outgrew the small plot. Three hundred people are buried in the cemetery, including some of Tonopah, Nevada’s original residents. Many of these people who call Tonopah Cemetery their final resting place fell victim to the mysterious ‘Tonopah Plague’ of 1902. An article from the LA Herald stated this in 1905 –

“It is not the black plague, nor any other kind of plague. It is simply an acute pneumonia of a very severe type. The sickness is believed to be due to the lack of sanitary conditions. The disease, strangely enough, only attacks grown men.“

The hauntings and horrors of Tonopah didn’t start with the ever-so-creepy cemetery. The ‘curse’ of Tonopah started with the Tonopah-Belmont Mine Fire. On February 23rd, 1911, the mine fire killed 17 miners. With the way that the mine was constructed, there lie two shafts — one upcast and another downcast.

The fire was noted around 5:50 am and after about an hour of searching for it, they noticed a fire burning some timber that had been piled near the bottom of the shaft. A small, lit candle was thought to be to blame for the fire. When it was first discovered, the superintendent of the time told everyone to ignore it, to go to work, since the fire was in a separate location. Most of the miners protested, but the threat of being fired was enough to push them deep into the mines that day.

After a few hours, the superintendent noticed that the flames were spreading quickly, and men were told to withdraw everyone from the mines except for those actively fighting the fire. Men were scattered all over, untrained, and disobeyed orders. This resulted in many of them being trapped within the mine and in the midst of the smoke and flames. Due to the mine’s setup, a reversal of air currents through the mine spread the blaze faster than the miners were able to escape. Fourteen of those men that died are now buried at the Tonopah Cemetery.

So — what does a haunted miner’s cemetery have to do with clowns? Well, right next door to the Tonopah Cemetery you’re met with one of the most unexpected and strange sights in the west…

Catering to long-distance travelers, the Clown Motel is the only place to rest on long, hot, unbroken stretches of Nevada desert. Truly, it must be because the motel is akin to an oasis, how else would this horrifying motel have stayed in business for so long? It’s almost as if the watchful peepers of these circus creepers serve as a warning rather than an invite to come inside and stay a spell.

From the moment one steps foot into the motel, you are greeted with hundreds of clowns of all sizes. Life size, miniature, all of them creepy as can be! As you walk from the office after check-in, you may notice an arch hanging over the nearby Tonopah Cemetery entrance. Just beyond that is a century’s-old miner’s graveyard, made of stone and wooden markers. When you think of a spooky cemetery, this is exactly what comes to the forefront of anyone’s mind.

Visitors to the Clown Motel swear that it’s haunted. Legend states that the clown statues act as vessels for the miner’s ghosts, they possess the dolls and come to life. Apparitions have been seen walking to and from the graveyard, and disembodied voices have been heard saying ‘we mined’ and ‘we died that day.’

If you go back far enough in history, the Pueblo Native Americans used to dress in clown-like costume, releasing their own personalities and welcoming possessions of nearby spirits. Perhaps clowns, with their identities ever-changing, allow for portals into the spirit world. Even the motel’s owner tells that he hears footsteps and knocking from unoccupied rooms of the motel.

Spirits of the Clown Motel

Room 108 is considered one of the most active spots in the motel. with visitors reporting disembodied voices, moved items, things going missing — all thanks to a spirit that has been called ‘The Trickster.’ This spirit is seen coming from the cemetery, taking the form of a clown to mess around with visitors to the motel.

Other guests have reported seeing a nearly 7-foot-tall clown standing at the foot of their bed while they wake up in a cold sweat. Some visitors report nothing during their stay, while others refuse to come back inside the get their belongings after their night spent there.

Many ghost investigation teams have visited the cemetery as well as the Clown Motel, finding themselves in a strange and otherworldly environment. Shadow figures are commonplace, and the area continues to be rich with history, and seeping with spirits.

But the Tonopah Cemetery and Clown Motel aren’t the only haunted locations in the town. The Mizpah Hotel is home to the elusive ‘Lady in Red,’ who was strangled to death in the hotel by her jealous ex-lover between rooms 502 and 504. She is said to haunt the 5th floor and well as the elevator. Spirits of several others have also been reported in the hotel, from children on the 3rd floor to murdered miners in the basement. According to USA Today’s Readers’ Choice Awards, the Mizpah is considered the nation’s number one haunted hotel.

It seems as if Tonopah is steeped in haunting history. The unassuming central Nevada desert town is home to tragedy, obscure history, and death. Perhaps it’s the miners that make this area so active. Or could it be the clowns… with their painted faces and larger than life smiles? One thing’s for certain, Tonopah will never run out of terrifying attractions, those of which have been drawing visitors in for years.

For more on the hauntings all across the United States, check out our blog!