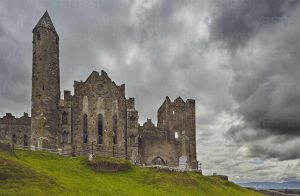 Cashel, Ireland is a town in Southern Ireland about 30 miles southeast of Limerick. The town itself owes its origin to the Rock of Cashel, an isolated and strange elevation of limestone that stands above the plain called the Golden Vale. The top of the rock is covered with remarkable ruins. Originally known as Fairy Hill or Sid-Druim, the rock was considered a castle in pagan times, and was treated and revered as such.

This ancient town holds many secrets within its rolling green hills, but one, the Cashel Man, uncovered in a small bog, seems to be a bit more mysterious than all the others. A body, dated 500 years older than King Tut, found compressed in a peat bog.

It was late afternoon on August 10th, 2011, and a Bord na Mona worker named Jason Phelan discovered human remains in a bog as operated a milling machine. His discovery was investigated over a four-day period by a team of archaeologists and conservators from the National Museum of Ireland. Archaeologists instead of police at the site of a body? It may seem strange, but the Cashel Man was discovered to have lived and died in the Early Bronze Age, which was around 2000BC.

The naked body was in the middle of the bog, lying on its right side with the legs tightly flexed. The head, neck, and left arm were removed by the milling machine, but some parts that were recovered included the mandible and teeth, ribs, skin, vertebrae, and hair. You may be asking, how did he get here? How did he die?

It seems as if the body had been placed on the surface of the bog, with two rods marking the place of decomposition. The remains are those of a young adult man and wounds found on the body suggest that this was a human sacrifice. Injuries noted are a long cut on the lower back, as well as a broken arm. The head, neck, and chest were too damaged by the milling machine to determine if the cause of death had been caused by injuries to these areas. Earlier reports from the initial pathologist’s exam suggested ax wounds on the back and a broken spine, but those have since been revised.

In Ireland, the ritualistic killing of young men was prevalent. The Cashel Man’s body was found on the border of a territory that was the probable place of the inauguration of the kings of Laois, making this location an important boundary. Other bog bodies also seemed to have been placed in proximity to key locations as well. Alongside the bodies, other finds include weapons, attire, and regalia, as well as feasting equipment. This gives rise to the theory that bog bodies are a ritual of kingship and sovereignty.

How Old Is The Bog Body?

One of the rods placed near the body had a radiocarbon date of about 2033-1888 BC, while the body itself was dated 2141-1960 BC. The surprising result was confirmed when the radiocarbon date on the peat in the bog where the body lay matched the date of the body itself, about 2000 BC. Although skeletonized remains of older origin have been found in Irish bogs, the Cashel Man is the oldest bog body with flesh still attached. Researchers of the body say that the bog is an amazing place, it’s an anaerobic environment in which the oxygen that bacteria feed off of is not present, preventing decomposition from occurring.

The Human Side of Bog Bodies

Other bog bodies are on display at the National Museum of Ireland alongside the Cashel Man. Eamonn Kelly, a long-time keeper at the museum, has a deep knowledge of Irish mythology and symbolism. He explains the stories behind the bodies on display, where their well-preserved hands are a truly striking feature.

“They are so evocative, really. You can see those arms cradling a baby, caressing a lover, or wielding a sword. But the personality is there, it’s been preserved in their remains.”

He explains that the bodies are all male and aged between 25 and 40 and that they suffered violent deaths as the result of human sacrifice.

“When an Irish king is inaugurated, he is inaugurated in a wedding to the goddess of the land. It is his role to ensure that through his marriage to the goddess that the cattle will be protected from plague and that the people will be protected from disease. If these calamities should occur, the king would be held personally responsible. He will be replaced, pay the price, and sacrificed.”

Eamonn states that the Cashel Man fits this pattern of sacrifice because his body was discovered on a border line between territories and within the sight of the hill where the king would have been crowned.

A critical piece of information is missing from the Cashel Man, however. Because the Cashel Man’s chest was destroyed by the milling machine that uncovered him, researchers have been unable to examine a key piece of human anatomy — his nipples.

In other bog body cases, the nipples were deliberately damaged. These are bodies of kings that have been decommissioned, mutilated, and sacrificed. As part of that sacrifice, their nipples are always mutilated. In Irish tradition, they would no longer be able to serve as king if their bodies were mutilated in this way. This ensured he would never be king again, even in his next life.

The Cashel Man is likely to be revered and respected at the museum, like the other bodies on display. Eamonn Kelly states

“I see these bodies as ambassadors who have come down to us from a former time with a story to tell. I think if we can tell that story in some small measure, we can give a little added meaning to the lives that were cut short. Even though it was thousands of years ago, it is still in each and every case a human tragedy.”