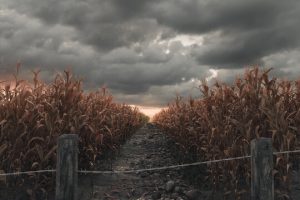 Attracting thousands of visitors every year, the Bell Family Farm is one of Tennessee’s most unexplainable locations. With one of the strangest histories known to man, the farm has been the subject of haunted happenings since the 1800s. An invisible force, named “Kate” has been terrorizing the property and all who lived there since its inception.

Who is this mysterious Kate? What is her connection to the property? What kind of crazy experiences are reported at the farm? All of these answers — and more below! Are you looking to experience the haunts of Tennessee for yourself? Join us for a Nashville ghost tour and get up close and personal with the spirits of the Music City.

John Bell was an American farmer who was born in Edgecombe County, North Carolina. Bell was an apprentice barrel-maker during his early years and later saw just how lucrative farming could be. He changed career paths and pursued a career in the fields.

John met and married Lucy Williams in 1782 when she was just twelve years old and he was thirty-two. He settled with his child bride on the farm he had bought previously. The Bells prospered on their land and were among the area’s most successful planters. In the winter of 1804, Bell and his family started on a journey that would take them to an area called “Red River.” They settled in the northwest section of Adams, Tennessee. Finally settled down, Bell and Lucy had six children together, Jesse, Betsy, Richard, John Jr., Drewry, and Benjamin.

After John Bells’ death and estate settlement, Lucy inherited a slave of the Bell family named Dean and a 106-acre tract of land that included the Bell home and cemetery. She remained at the homestead until her death in 1838 and is buried on the family plot in the Bell City Cemetery near Adams, Tennessee along with her late husband and some of their children.

The legend of the Bell Witch centers on the Bell family of Red River, Tennessee. The family endured a spiritual haunting from 1817 until 1821, four years of pure horror. The family was terrorized by an unseen force that went by the name of “Kate.”

One day in 1817, John Bell was out walking around his cornfields when he encountered an unexplainable and strange-looking creature in the middle of a cornrow. It wasn’t like any animal he had ever seen and he immediately drew his weapon, shooting at it several times. Accounts state that the creature had the body of a dog and the head of a rabbit. This was the very first documentation of the manifestation of the strange entity.

Bell thought nothing more of the occurrence, he figured he was just sleepy, perhaps he hallucinated the creature. He headed back inside for dinner and let it go.

Unfortunately, the entity had other plans. After supper, the family began to hear beating sounds on the walls of their home, as if someone was banging on the outer walls attempting to break in.

The sounds increased in force and frequency, the Bell family began to grow angry with the noise. Bell and his sons would rush outside as soon as the banging stopped to attempt to catch the culprit of the disturbances.

In the following weeks, the children grew more and more frightened by the noises, complaining that they were being awoken by the sounds of mice and rats gnawing at their bedposts. They also reported having their blankets ripped off of them during the night, and their pillows being tossed onto the floor.

Time went on, and the entity started to whisper into the ears of the family. They described the voice as a feeble, old woman. The encounters began to escalate — the youngest Bell daughter, Betsy, began to experience truly brutal happenings involving the entity. It began to get physical, slapping her and ripping her hair out. It would beat her relentlessly, leaving bruises and welts all over her.

The disturbances had gotten so bad that John Bell had to finally share the details with a close family friend, James Johnston. Johnston was skeptical, but he and his wife spent the night at the Bell home to see the activity for themselves.

Their skepticism was confirmed as their night began peacefully and relaxing. Once they went to bed, however, they experienced the very same events that the Bell family had been enduring. After their blankets were ripped from their bed, James was physically attacked. He sprang from the bed, demanding that the entity state its name in the name of God. The rest of the evening was quiet, and in the morning, James explained that the entity was a dark one, like a demon straight out of hell.

Over the next couple of years, the entity’s strength multiplied. It started to mock hymns, quote scripture, and carry on conversations with the Bell family. It even quoted two sermons that were preached the same day 13 miles apart. Word of the so-called “Bell Witch” spread to Nashville, and even caught the attention of Andrew Jackson.

JACKSON AND HIS MEN PAY A VISIT TO THE BELL WITCH

John Bell Jr. and two of his brothers had fought under General Andrew Jackson in the Battle of New Orleans. Once Jackson heard of the disturbances occurring at the Bell Family Farm, he decided to investigate further. He and his men came towards the property and as they were crossing a middy river, their wagon became stuck.

After several attempts to free the wagon, Jackson, exasperated, said “By the eternal, boys, it’s the Bell Witch!” Not seconds later, the entire party heard a disembodied female voice that stated they could proceed and that she would greet them later that evening. Once at the farm, Jackson and his entourage set up their tents and settled in for the evening. That night, the men encountered the witch, some of them feeling pins under their skin, while others were severely beaten. Jackson’s men begged to leave the farm, but Jackson refused. The following events are unclear, but he was seen in Springfield early the next morning and was reported saying

“I would rather fight the British at New Orleans than fight the Bell Witch.”

THE WITCH ZEROES IN ON JOHN BELL

The entity began to focus on the patriarch of the family, relentlessly vowing to kill him. Bell started to experience episodes of twitching the problems swallowing. By 1820, his declining health forced him to stay home where the entity took full advantage of him. John Bell passed away on December 20th, 1820 after slipping into a coma a day earlier. Immediately following his death, the family found a black liquid coming from the cupboards. The family also reported hearing a female voice state that she was responsible for the death of John Bell. Could the Bell Witch truly have ended this man’s life?

John Bell’s funeral was one of the largest ever recorded in Robertson County, Tennessee. People gathered from all over to see the man who had allegedly been killed by the Bell Witch.

THE BELL WITCH’S WAKE OF TERROR

The entity that took over the Bell farm and tormented the Bell family is still blamed for the hauntings that occur at the Bell Farm today. Faint sounds of people talking, candle lights, apparitions, orbs and mists, and unexplainable touches and pushes are reported at the farm to this day.

The cause of the hauntings over 200 years ago remains a mystery. Who was the Bell Witch? Why did she torment the family? Could she have been a dark spirit tied to the land? Perhaps we’ll never know. What do you think?

A Poem About The Bell Witch

Life was like the magic spell,
That guides a laughing stream,
Sunbeams glimmering on her fell,
Kissed by lunar’s silvery gleam.

But elfin phantoms cursed the dell,
And sylvan witches all unseen,
As our tale will truly tell,
Wielded scepter o’re the queen.

From M.V. Ingram, Authenticated history of the Bell Witch, 1894.

For more haunted Tennessee, check out our article about the Union Station Hotel in Nashville!