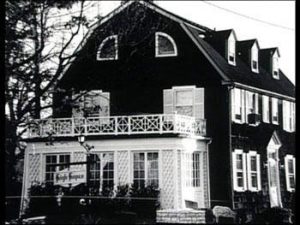 Horror lovers are likely familiar with 112 Ocean Avenue. That’s the address where Ronald DeFeo Jr. killed his parents and siblings in their sleep in November of 1974. Also well known as ‘The Amityville Horror House,’ three years later, George and Kathy Lutz gained national attention for the “horrors” they experienced after buying the home in 1975. These included odd odors, green slime oozing from the walls, levitation, devilish creatures, cold spots, flying objects, and more. The ghostly activity became the subject of a novel and several movies, though the validity of their story has been questioned over the years.

Some people believe the house was haunted prior to the murders and DeFeo was led to madness by an evil presence that still lingers there today. Others believe the house is haunted by the tortured spirits of his victims. Either way, the house has made Amityville famous, drawing visitors from all over the country. At one point in the late 1970s, the “Ocean Avenue” sign was removed in an attempt to keep people away from New York’s most haunted home.

The History of the Amityville Horror House

Located in a quiet, suburban neighborhood, the Amityville Horror House was nothing short of your typical family home. The house was occupied by the DeFeo family, who moved in when they purchased the property in 1965.

In 1974, almost ten years after their arrival, the family was eerily murdered in what would become a legendary night in New York history. Adding to the fright of the story is the fact that Ronald DeFeo Jr., then only 23 years old, is believed to be the murderer who killed his whole family while they slept. His youngest victim was his brother John Matthew, who was only nine years old.

The reason behind the family’s murder remains unclear. It is well-known that Ronald Jr. had a volatile relationship with his father, Ronald DeFeo Sr., And of course, there is also a money trail: while in police custody, Ronald Jr. repeatedly asked police officers how he could collect his father’s life insurance. At trial, the prosecution argued that said insurance money was the motive for his actions.

Ronald Jr. himself claimed other reasons, however. He alleged that his sister Dawn killed their father and that their mom, in a state of distress, killed all of his siblings with a .38 revolver. Ronald Jr. maintained that he then used the same murder weapon to kill his mother and that he, being a good son, took the blame for her actions because he was trying to protect her reputation. He didn’t explain why he had to kill her though, and he has since then given even more disparate explanations so needless to say take him with a grain of salt.

Both of the parents and all four of the children were found dead face-down in bed. Ronald Jr. and his wife Louise had been shot twice; the kids only once. There were no signs of struggle or confrontation, and evidence also suggests Ronald Jr. and his daughter Dawn were awake at the time of their deaths. The murders are believed to have happened around 3:15 am, right around witching hour.

While the rest of the family may have been asleep, patrons at Henry’s Bar were rowdy and wide awake when a restless Ronald Jr. rushed in screaming for help. The cops were called and Ronald Jr. was taken under their protection because he convinced them the killer could come after him next — little did they know that the suspected murderer was right under their noses the whole time.

After being found guilty on six counts of second-degree murder, Ronald Jr. spent the rest of his life at the Sullivan Correctional Facility. He died at the age of 69 at the Albany Medical Center and his cause of death has mysteriously not been disclosed to the public. For all we know, maybe he’s back to living at Amityville Horror House.

Like all good haunted houses, Amityville is built in the Dutch Colonial style: gambrel roofs, curved eaves, wooden floors that squeak randomly at night. The house has five respectable bedrooms, a swimming pool, and, of course, a boathouse. Why not?

As if any of that weren’t creepy enough, the house also still had all of the DeFeo’s furniture at the time new owners moved in — it was stipulated in the sale for just $400, surely an insult to the dead family. One particular room on the second floor is of importance.

After the DeFeo’s brutal murder, the house was sold to the Lutz family, their three children, and a wacky Labrador who apparently could not keep them safe. The Lutz decided to have their new home blessed after hearing about the previous owners, so they invited Father Ralph J. Pecoraro to do the deed.

The story tells that Father Ralph heard a very masculine voice say “get out” as soon as he sprayed the room on the second floor. The room used to belong to Marc, 12, and John Matthew DeFeo, 9. At least the masculine voice didn’t tell Father Ralph to kill anyone as it did with DeFeo Jr.

Almost immediately after Father Ralph left Amityville, he noticed blisters on his right hand and developed a high fever. He called the Lutzes and tried to warn them not to use the room where he had heard the voice but the call was cut short by static or an angry ghost. The Lutzes went on to enjoy some pretty uneventful and peaceful days until their ghostly days had enough of them…the events the Lutz experienced included a knife falling in the kitchen, the children levitating in their beds, and Mr. Lutz waking up every night at exactly 3:15 am.

Facts About the House

Surprisingly, Amityville Horror House is not a museum or privately managed property. It remains a single-family home that was recently taken off the market, though tourists and devoted fans still visit the street where one of the most heinous murders in Suffolk County happened. It’s hard to imagine that the new owners like the attention, but maybe they do.

Next time you’re visiting the Big Apple, cross over to Long Island and see this nutty home for yourself. If you start hearing voices, or if you notice some blisters on your hands…well, we don’t know what to tell you. For more of the most haunted locations in America, check out our America’s Most Haunted Part One article!