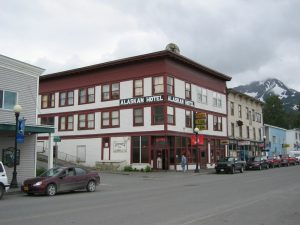 The Alaskan Hotel and Bar, also known as the Northlander Hotel and The Alaskan is the oldest operating hotel in Juneau, Alaska and is one of the city’s most historic properties. It was opened in 1913 after three miners struck it rich in the nearby Coast Range. They even tied their first set of hotel keys to a helium balloon and released it, signifying that the hotel would never close. The building did stay open until the 1970s when it was briefly condemned, but it was rehabbed and brought back to life by new owners.

The building itself was later listed on the National Register of Historic Places in 1978 and was included as a contributing property to Juneau Downtown Historic District in 1994. An important piece of Alaskan history, indeed. But, what makes the hotel top the list of almost every single ‘most haunted hotel’ countdown? Read on to find out.

For a more up close and personal ghostly experience, check out our website to see if we offer a ghost tour in your city!

History of The Alaskan Hotel

It was the start of the 20th century in Alaska, and Juneau was just a frontier mining camp when the Alaskan was conceived. There weren’t many hotel servicing the growing population which doubled between 1910 and 1920. The Alaskan Hotel opened its doors in 1913 and was considered one of the best hotels along the entire Pacific coast. Since it’s opening, its hosted thousands of guests — some of which haven’t checked out.

The hotel was built in just five short months, with the hard work of Alaskan miners and builders to thank. During its 107-year history, the hotel has seen some tough times and was even condemned at one point.

The three story hotel boasts forty-six guest rooms and was built by James and John McCloskey and entrepreneur Jules Caro. At the time, Juneau was a city that needed to grow rather quickly to accommodate the growing number of miners and their families who came to the area in hopes of coming across gold deposits during the Alaskan gold rush.

Originally a hotel and bordello, it was a place used to spend some of the money miners made from the gold they worked so hard to find. It’s with one of these early miners that the ghostly stories of the Alaskan Hotel begin.

Tragedies and Haunts of the Alaskan Hotel

According to local lore, in the earliest days of the hotel, a miner and his new bride came to Juneau and stayed at the Alaskan. He told his new wife that he would be gone for about three weeks working a nearby mine and to wait up for him at the hotel.

Three weeks came and went. Her husband didn’t return. Finding herself out of money and unable to pay her growing hotel bill, she turned to prostitution in order to survive. The story goes that her husband ended up returning, later finding out about what his wife had done. He was so angry at her for her decision that he murdered her in cold blood in one of the rooms.

Scott Fry was the manager of the Alaskan Hotel for over twelve years. He told of the reports he used to get from guests who stayed in Room 218 –

“Room 218. I used to get people saying, ‘She’s in my room.’ I’ve had people tell me that she was touching them, or they could see her sitting on the bed. A friend of mine told me if you walk up the top of the stairs, you could see her in the mirror by [room] 308. I’ve also had people tell me she was in the bar coming down the stairs. The bar has a lot of mirrors in it, and it’s easy to see things out of the corner of your eye, especially if you’re tired.”

But room 218 isn’t the only room in the hotel rumored to be haunted. One story told by Bettye Adams, the hotel’s current owner, sits heavy in the hotel’s history. She recounted a horrifying incident when a Navy seaman requested to stay in room 315 because of the ghostly activity he had heard happened there.

Not long after his arrival, police were notified of a disturbance in one of the rooms. They hurried up to room 315 where they found the door locked. According to reports, the man leaped from the third-floor window. He survived the fall but when police were able to enter the room, they found the walls completely streaked with blood.

Did something scare this brave Navy soldier so badly that his only escape was a risk of death? What could have caused so much blood to be left behind on the room’s walls? What happened in room 315 remains a mystery to this day, but employees still tell of strange sounds and sensations surrounding the third-story room.

One employee of the Alaskan Hotel has been working there on and off since 1974. Though he has never had a personal experience, he’s heard about all of the ghostly happenings from other staff and guests. Housekeepers used to always state that there’s one particular room in which things are moved around by unseen hands. They’d place towels gingerly and come back to find them messed up or moved to a different location. Another employee told of a time he saw an apparition of a young girl in a white dress who he only caught a glimpse of before she vanished.

The hotel’s bar is also active with unbottled spirits, and reports include apparitions as well as glasses moving on their own.

A few ghost investigation teams have visited the hotel and warn of a female entity who is known to attack guests. The hotel has even been featured on popular television shows such as The Alaska Triangle and Portals to Hell.

So, just what is going on at the Alaskan Hotel? Who is responsible for spooking the sailor? Is there really a spirit of a murdered woman wandering the halls and rooms of the hotel, terrorizing guests? Who is down in the bar messing with cups? With all of these unanswered questions, it seems as if a stay at this haunted hotel is the only hope for any type of solid answers. Have you ever stayed at the Alaskan Hotel?