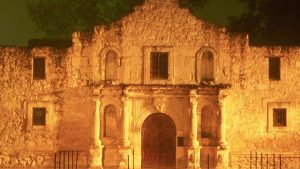 If you don’t remember the Alamo, the spirits who reside there will make sure you do from now on.The San Antonio fort — which Davy Crockett and roughly 200 other Texans defended for almost two weeks before they were overtaken by General Santa Anna and his men — has been haunted since the day it fell in 1836.

When Santa Anna ordered his men to destroy the fort and its Franciscan church, the men returned defeated. They claimed they encountered “six diablos” carrying flaming swords. Many people believe these were the spirits of former monks defending their sacred mission — and it worked. The church and surrounding plaza are now protected historical sites dedicated to the battle, but the spirits haven’t left their posts. There have been reports of spectral figures, disembodied voices, loud bangs, and the sound of horses.

The History of the Alamo

“Remember the Alamo…” the song goes. As if forgetting the place’s history could ever be possible.

Named after the Spanish word for cottonwood, the Alamo’s origins can be traced back to the 1700s when Spanish missionaries established the Mission San Antonio Valero, a settlement where both missionaries and their indigenous converts lived together. Rumor has it that some of those priests  abused and mistreated the local natives –– so it’s really no surprise the place is haunted. The Alamo has basically been cursed since before it became the Alamo, and those early tenants were apparently quite stubborn. According to urban legends, the same priests and monks never left and their ghosts continue to haunt those who come near.

Fast-forward to the early 1800s, when new Spanish troops arrived at the old Mission and gave it a make-over. The troops took residence in a nearby abandoned chapel from where they seized and secularized five other missions in the area before distributing the land to locals. You can imagine how those monks and priests reacted…

Over time, the place became populated not just by  the Spanish but also by Mexicans and even Americans. The Alamo was an outpost of Mexico at  the time, and its distance from the capital made it  a sort of Wild West, especially for the Americans who were also very far removed from the Washington, DC.

You would think everyone got along, but it wasn’t long before everyone started shooting each other…maybe it was all that residual colonial violence. By the mid 1830s, there were enough Americans in the area to fuel a revolutionary movement and long story short, in the cold December of 1835, a group of volunteers led by George Collinsworth and Benjamin Milan captured the Alamo and declared independence. About 2 months later, in February of 1835, Mexican General Antonio Lopez de Santa Ana marched a force of up to 6,000 men and launched an attack on the Alamo, where the Americans were keeping post. The poor things were wildly outnumbered. After 13 impressive days, the Mexican forces finally broke them down and were told to take no prisoners.

To this day, there are some who claim to hear loud bangs as if the scene were still in battle. Whatever it is about the Alamo, people who live there just don’t want to leave!

During the Mexican War for Independence, the Alamo became a prison for criminals and other war casualties. So many people have suffered inside those walls that it’s hard to say whose screams are heard at night.

The Alamo witnessed not one but two bids for independence, the second one led by Americans who wanted Texas to be its own country. On the morning of March 6, 1836, 13 days after the siege had began, Mexican forces managed to breach one of the outers walls. The blast from the attack can still be seen today, and we can’t imagine those monks are too happy with what  has happened to their precious Church.

One spot of particular significance is the Menger Hotel, which sits just a stone throw’s away from the Alamo. Built in 1859, the Hotel initially had 50 rooms spread across two stories. All kinds of people have booked themselves in, including U.S. Presidents and even more impressively, Babe Ruth.

But don’t be deceived by the glamour and celebrity. According to many unfortunate victims, the hotel is just as haunted as the Alamo, maybe even by the same ghosts.

One of the paranormal sights reported at the Menger is the ghost of a young boy who is said to roam the halls.

Some have also reported seeing the ghost of Sallie White, one of the maids who worked and died at the Hotel. According to the story, her husband was abusive, and Ms. White died from injuries sustained during one of his attacks.

As if all that weren’t enough, people who work at the hotel also report seeing flickering lights and chilling sensations that send you shivering just thinking about them –– including the feeling of being watched or having someone standing behind you.

Facts about the Alamo

There’s more to the Alamo than the famous song, in case that isn’t clear yet. Really, the place is a ghost hotspot  that  just  keeps on giving. Some interesting facts include:

From Spanish conquistadores to fiery Texans, the Alamo has seen quite the collection of owners. Few places have been as contested in American history –– and with all the blood that has been spilled, it’s not really a surprise that the poor place is haunted. If you’re planning on visit, maybe expect to hear some cannons blasting.

For more hauntingly interesting reads, check out the rest of our blog!