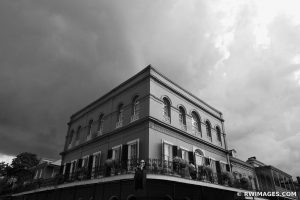 The horrific tale of LaLaurie mansion begins with a woman named Delphine LaLaurie, also known as Madame Blanque. She was a New Orleans socialite born on March 19th, 1787. Both of her parents were prominent in the town’s European Creole community, and her uncle, Esteban Rodriguez Miro was governor of the Spanish American provinces of Louisiana and Florida during 1785-1791. Her cousin was mayor of New Orleans from 1815 until 1820. Needless to say, she had family in high places.

Delphine was just four years old when the Haitian Revolution erupted in 1791, making slaveholders in the south and the Caribbean very worried about resistance and rebellion among their slaves. Delphine’s uncle had been killed in 1771 by his slaves, and the revolution had inspired further rebellions that created a culture of harsher discipline for slaves out of fear of insurrection.

On June 25th, 1825, Delphine married physician Leonard Louis Nicolas LaLaurie, who was much younger than she was. In 1831, she bought property at 1140 Royal Street, which she managed in her own name with little to no involvement from Leonard. In 1832, she had a two-story mansion built on the land, complete with attached slave quarters. She lived there with Leonard and their two daughters.

Their marriage soon began to show signs of strain, and on November 16th, 1832 she petitioned the First Judicial District Court for separation. She claimed that LaLaurie was treating her in a way that rendered their living together ‘unsupportable.’ Her daughters confirmed the treatment, but once you learn about the type of evil woman Delphine was, you may start to question whether or not she had her whole family manipulated under threats of punishment. Her husband remained in the home, however.

Since it was custom in New Orleans at the time to keep slaves, most houses came with attached slave quarters. The LaLaurie slaves were kept in horrendous conditions, even by the standards of slave treatment. They were found half-starved, and beaten. Accounts of her treatment towards her slaves from 1831-1834 are mixed, but most tell of the nightmares that she bestowed upon these people in her home.

Harriet Martineau, often seen as the first female sociologist, visited New Orleans and the LaLaurie mansion. She recounted what she experienced there and claimed that LaLaurie’s slaves were particularly ‘haggard and wretched,’ even though in the public eye LaLaurie was seen being polite to the African-American population of the city. She even stated that her concerns lie in the health of slaves and making sure they were ‘taken care of.’ Truly narcissistic and evil, a double-life, two-faces, perhaps.

Funeral registers between 1830 and 1834 document the deaths of 12 enslaved people at the mansion, although the causes of death are not mentioned. Twelve people died within fours years under Delphine’s ‘care.’ The deaths include those of Bonne, a cook and laundress, as well as her four children, Juliette, Florence, Jules, and Leotine. Court records of this time showed that LaLaurie freed two enslaved people, Jean Louis and Devince — perhaps to quell the rumors swirling around town of her mistreatment of the enslaved on her property. A local lawyer was even dispatched to the home to remind Delphine on the laws surrounding the upkeep and care for enslaved people. During this visit, the lawyer found no evidence of wrongdoing or mistreatment.

Harriet Martineau also recounted other stories of LaLaurie’s cruelty that were current among New Orleans residents in 1836. She stated that right after the visit of the lawyer, one of LaLaurie’s neighbors saw an 8-year-old enslaved girl all to her death from the roof of the mansion while trying to avoid punishment from LaLaurie. Her body was then buried on the property. The case was later elaborated upon, and it was said the girl’s name was Lia, and she had been brushing Delphine’s hair when she hit a snag, causing Delphine to go into a rage and chase the girl with a whip.

This led to an investigation of the LaLauries, in which they were found guilty of illegal cruelty and were made to forfeit nine enslaved people of their household. These nine people were later brought back to the house through a relative of the LaLauries after Delphine had persuaded them to purchase the enslaved people and return them to her. The horrors they may have faced upon their return aren’t documented, but based on Delphine’s track record, it couldn’t have been anything less than a nightmare. Martineau recounted stories that LaLaurie kept her cook chained to the oven and even beat her own daughters when they attempted to feed the enslaved people of the Royal Street residence.

On April 10th, 1834, a raging fire broke out in the LaLaurie residence, starting in the kitchen. When the police and fire marshals arrived, they found the cook, a seventy-year-old woman, chained to the stove by her ankle. The rumors were true. The cook later said that she had set the fire as a suicide attempt because she lived in fear of being punished by Delphine. She stated that enslaved people who were taken to the top floor never came back down.

Bystanders responding to the fire attempted to enter the home’s slave quarters to ensure that everyone had been evacuated. Upon the refusal of the keys to their slave quarters, bystanders broken down the door and found something unrealistically sadistic.

“Seven slaves, more or less horribly mutilated… suspended by the neck, with their limbs apparently stretched and torn from one extremity to the other, imprisoned there for months.”

One of the bystanders was Judge Jean-Francois Canonge, who also told of what he found in the mansion. He said he saw a woman wearing an iron collar, and an older woman who had received a very deep wound on her head, too weak to walk. Canonge said that when he questioned LaLaurie’s husband, he was told that ‘some people better stay at home rather than come to others’ houses to dictate laws and meddle with other people’s business.’

Other accounts told of emaciated enslaved people, those with scars from whips, those bound in restrictive postures, and some even wore spiked iron collars to keep their heads in one position, day and night.

Upon the discovery of the conditions, a mob of local residents descended upon the LaLaurie mansion, destroying everything they could get their hands on. A sheriff and a few officers were called to disperse the crowd, but by the time of their arrival, the property had sustained major damage and was left with nothing but the walls remaining.

After the fire, the enslaved people from the LaLaurie mansion were taken to a local jail and over 4,000 people came to see them, to ‘convince themselves of their suffering.’ Several weeks passed, and two of the enslaved people evacuated had died since their rescue. Two bodies were later found buried on the LaLaurie property, one of course being the body of little Lia.

LaLaurie managed to escape from justice for her crimes. She took a couch to Mobile, Alabama and later on to Paris where she stayed until her death in December of 1849. The date of her death and the cause aren’t confirmed.

The original LaLaurie mansion did not survive the fire. Atop where the original structure stood is the one we see today. It was rebuilt in 1838 by Pierre Trastour and functioned as a high school, an apartment building, a refuge for young delinquents, a bar, and even a furniture store. The faces of the LaLaurie mansion keep changing, but spirits of the past remain the same.

Hauntings at the LaLaurie Mansion

Rumored to be one of the most haunted house in the French Quarter, the LaLaurie mansion has been the subject of ghost investigations and media circuses since its horrors were unveiled. For close to two-hundred years, unexplained stories have come out of the home. Many of the hauntings are attributed to the slaves that Delphine kept here. There is a room in the LaLaurie mansion where slaves were often kept, and reports of moaning and groaning coming from where the room was are common.

Not all of the hauntings at the LaLaurie mansion can be traced back to human activity. In 1894, a tenant who lived at the mansion when they were converted into apartments was brutally murdered in his apartment. His belongings were found ransacked, but nothing was missing. An interesting account was told by one of his friends stating that the tenant had been having problems with ‘Sprites’ in the apartment.

His friend wrote it off, saying that it was just his imagination running wild, but he did tell that his friend claimed there was a demon harassing him inside of the apartment. This demon told him that it wouldn’t rest until he met his end. Could a demon have been responsible for the man’s murder?

The LaLaurie mansion was an all-girls school from the mid-to-late nineteenth century. Within a short amount of time, reports of physical assault started to come to light. These young girls would approach their teachers with bruises and scratches all over their arms. When asked who hurt them, all of the girls stated it was ‘that woman.’

It leads one to believe that this ‘woman’ could have been the phantom of Delphine, torturing the girls of the school, which just happened to be an all-African American population.

Delphine LaLaurie was known as a sadistic and tortuous woman, whose appetite never seemed to be appeased until she had inflicted some form of torture on each and every one of her slaves. Ghastly tales of torture have come from the house since it was built and ghostly stories continue to come out of it today.

The history of the mansion tells of the nightmares that enslaved people of the past were faced with every day,. LaLaurie’s torture surely wasn’t an isolated incident. Today, the home stands as a stark reminder of the dangers of ignorance and backward-thinking. Many visitors flock to the home every year, hoping to catch a glimpse of a spirit and to learn the history of the home as well as the entirety of the historic French Quarter.

For more hauntings of NOLA, check out our article covering St. Louis Cemetery, where Madame LaLaurie is said to be buried!