Terrifying Things Found In The Woods 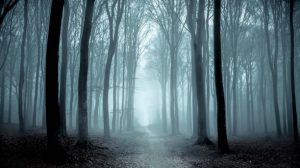 Forests are inherently mysterious, strange, and otherworldly. Generations of people have ventured into them, surrounding themselves with the innate beauty of nature and the peace and solitude that being within the trees brings. With so much wandering, it’s no surprise that items become lost, secrets are hidden, or strange things are found in the woods. Usually, forests are a place of happiness and oneness with Mother Nature, but sometimes, forests bring about a different feeling — one of dread and fear. Below you’ll find just a few examples of mysterious and even terrifying things found in the woods that coat our landscape. Perhaps you’ve even found some strange things yourself!

If wandering through a dark forest alone doesn’t sound like your cup of tea, why not join us for a ghost tour? Check out our locations here and see if we’re near your city!

One forest visitor found an intricately woven tunnel created out of branches and tree limbs. What looked like some sort of forest portal quickly turned freaky when feelings of dread overcame the entire group as they decided whether or not to go into it. Luckily, none of them did. Who knows what they may have found on the other side!

The reception usually isn’t the greatest in the middle of the woods, but how did a random phone booth find its way to the forest? One story tells of a huge, heavy old-fashioned phone booth being found in the midst of the Canadian wilderness. It’s long been shown in science-fiction novels and movies that phone booths make good time machines… perhaps the owner is nearby, let’s just ask them!

Trees conform to questionable shapes on their own with the help of the elements, but at what point are they just too strange? One hiker found a tree with branches that formed the shape of a monster-type apparition, peering at her and her dog through the branches. She was startled at first, thinking that a tangible person was following her, but perhaps this is even scarier!

Forests are the burying ground for countless people, with most of their graves going unnoticed. However, stumbling upon a couple of old, wooden coffins above ground — that’s enough to make anyone’s skin crawl!

Dolls are creepy no matter what. Imagine how you’d feel stumbling upon a single baby doll head in the middle of the woods. That’s exactly what happened to one forest day-tripper. The account goes as follows:

“It was right in the middle of a short trail. No garbage or anything around it. And no other doll pieces were near it. It was like someone wanted someone to find it. And the very next day it was gone.”

Count us out of this discovery.

This story comes from the online community Reddit and tells of a horrifyingly mysterious find within Yellowstone National Park.

“I was backpacking in Yellowstone above the tree line at about 10,500 feet. We are hiking on a ridge above a lake when all of a sudden we come across a horse skull. No body, just the skull, pretty cool looking. We get to our campsite not too far away from the lake near where we found the horse skull. When we climb down to the lake we find the body of the horse rotting on the edge of the lake with negative film strips floating in the water and lying around the shore near the body.”

So many questions with this one… read on and draw your own conclusions. The story was told as follows:

“I once found a bloody backpack and a termite-infested book nearby. Clearly, someone had left this here for a very long time considering the amount of termite damage. I picked the backpack up to see what was inside it and I saw that it left an indentation in the pine straw below. Inside the backpack were a mint condition notebook and a decaying binder. I left to tell my parents about the discovery. When we got there, the objects were just gone. It was like the backpack was never even there. There was no indentation left in the ground and there were no termites at all. My footprints were still there, but there weren’t any other footprints anywhere.”

In the past, recordkeeping for the deceased was less-than-perfect. Hundreds of people died and were buried in family plots, tiny graveyards, and only the wealthy were able to afford so-called fancy burying grounds. This led to countless bodies buried in hidden locations, only to be found hundreds of years later, like this hiker that found a strange headstone in the midst of the woods:

“Whoever it was died at the age of 34. The epitaph was: ‘Beneath this stone here lies a youth Whose soul was goodness and whose heart was truth Cropp’t like a flower she witherd in her bloom, Though flattering life had promis’d years to come. The years she liv’d, in virtue’s paths she trod, But now her spirit soars to meet its God. In realms of bliss, where Joys eternal reign, Devoid of care and uncontrol’d by pain.’”

Other headstones were found alongside this one, but they had been decaying and vandalised so they were unable to be deciphered, their names lost with time.

Have you ever found something strange within the woods? With an estimated 36.2% of America being covered in forests (that’s 818 million acres) it’s no surprise when unexplained items or sites are discovered. Our forests are much like our oceans — wild, untamed, and yearning for us to venture just a bit deeper to discover the secrets hidden within them. Hungry for more haunted nature? Check out our article about the haunted Lincoln Park Zoo. Lincoln Park and the Lincoln Park Zoo are filled with strange activity of all types, both visual and auditory, as well as hosting a ‘heavy’ atmosphere and physical effects like nausea and lightheadedness. Though the bodies from the area have been reinterred, the verdant lawns of the park and the rolling wildlife of the zoo may conceal as many as 10,000 unmarked graves that were destroyed in the Great Chicago Fire.