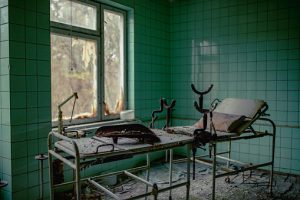 Hospitals are truly one of society’s most sensitive structures. Hospitals see birth, death, illness, and healing. They see families as exuberant or mourning. They witness brilliant energy or dark shadows and pain. In Massachusetts alone, there are 97 hospitals in operation. (and two hauntingly historic ghost tours in Boston and Salem) Many have come before, now abandoned or shut down. Hospitals of these kinds once dotted the fields and country-sides of America, their own self-contained cities. Taunton State Hospital is one of these places, located in the historic state of Massachusetts. Below, you’ll learn about the darker history of the hospital, the goings-on that occurred, and the spirits that have stuck behind.

Taunton State is a psychiatric hospital located in Taunton, Massachusetts. Now just a shell of one of Massachusetts haunted hospitals, the building opened its doors in 1854. Taunton State bore witness to hundreds of psychiatric patients and, more notably, a couple of notorious serial killers. Originally known as the State Lunatic Hospital at Taunton, it was the second of its kind in the state of Massachusetts. The hospital and surrounding facilities are located on a rolling 154-acre farm along the Mill River.

The complex itself was expanded several times to make room for more and more patients. At its largest, it was comprised of over forty structures. The main building, Kirkbride, closed in 1975 and after its demise, the rest of the buildings fell into a state of disrepair. Taunton State, like most psychiatric hospitals of the time, followed the Kirkbride design, which allowed the hospital and campus to act as a self-sufficient town, and structures were built to maximize exposure to natural light as well as air circulation. The building form itself was meant to have a curative effect.

Sadly, innocent people such as veterans who sustained brain injuries and those with Alzheimers, Parkinsons, and Tourrette’s Syndrome were admitted to the hospital. Women who experienced anxiety and panic attacks, post-partum depression, and even fatigue were also high on the list of those brought to the hospital.

Some of the ‘science’ used to ‘cure’ patients included mostly pseudo-sciences like Phrenology, which measured a person’s skull, dead or alive, to find patterns that the mentally-ill shared. These ‘sciences’ continued at Taunton State Hospital well into the late 1940s, and the abuse carried on just as long. Solitary confinement, electroshock, and lobotomies were commonplace in hospitals of Taunton’s kind at the time.

These days, Taunton State Hospital and it’s surrounding grounds sit on the Registry of Historic Places, even though most of the original buildings were demolished or destroyed by fire.

Anthony Santo was born in 1894 in Italy, and he confessed to the murders of his two cousins and another girl in a span of three months. He stated that he went into ‘mad-spells’ where he couldn’t control his actions or anger. He was diagnosed with hallucinations and was eventually sent to Taunton, where he supposedly spent the rest of his life. His childhood is largely unknown, as he immigrated to America later in life.

His parents did recall a lousy bout of Scarlet Fever Anthony had suffered, which had left his mind ‘afflicted’ since. On June 6th, 1908, a fourteen-year-old Santo was questioned by police regarding the theft of a bicycle. Unprompted, he confessed to murdering two cousins and a six-year-old. He said that he lured his cousins into the woods and killed them both with large rocks and a knife. He also stoned the six-year-old girl, Louise Staula, to death.

Born as Honora Kelley in 1854, she was nicknamed ‘Jolly Jane’ after her arrest in 1901 and her confession to 31 murders. To really focus on her sickness, she was quoted saying her ambitions were ‘to have killed more people – helpless people – than any other man or woman who has ever lived.’ She was born to Irish immigrants, and her mother passed away when Jane was very young, leaving her with her alcoholic and abusive father. He was rumored to have sewn his own eyelids shut in a bout of supposed insanity. It’s no surprise that Jane, or Honora, ended up following the path she did.

Only a few years after her mother’s death, her father took her and her sister Delia to the Boston Female Asylum, never to see them again. Honora was eventually placed as an indentured servant in the home of Mrs. Ann C. Toppan, and Honora later took her last name. In 1885, Toppan began to train as a nurse at Cambridge, where she truly started to show psychopathic tendencies.

She took a liking to very elderly and frail patients, using them as guinea pigs in sick experiments with morphine and atropine, altering their prescriptions to see what it would do to their nervous systems. She spent a lot of alone time with these patients, making fake charts and medicating them to drift in and out of consciousness, even getting into bed with them. She stated she liked to see the inner workings of their souls and derived sexual thrill from her patients being so close to death. After Toppan began her career as a private nurse, her poisoning spree started. S

he killed her landlord, foster sister, and four elderly members of the Davis family, who she nursed for. When Minnie Davis was found dead, a toxicology report was ordered, and Toppan was eventually arrested for murder. After her trial, she confessed to her lawyer that she had killed about 31 people and wanted the jury to find her sane so she could have a chance at being released. Eventually, she was found not guilty by reason of insanity and was committed for life in one of Massachusetts haunted hospitals, Taunton State.

Strange Entities and Happenings at Taunton

Rumors choke the area, stating that while the original hospital was in operation, a notorious Satanic cult in the area operated it. It is said they would take patients into the basement to conduct dark rituals and even human sacrifices.

Today, there are still strange and unexplained markings on the walls of the basements, and while the hospital was still open, staff would attempt to go downstairs into the basement area only to be stopped by a force once their foot reached the bottom step.

Another commonly reported happening are the ghastly disembodied screams that echo from the hospital grounds. Blood-curdling, horrifying screams they are. Cries for help and sobbing are also heard when moving about the hospital. These hauntings have even seeped into the surrounding woods — the entire campus is deemed haunted. Taunton State Hospital is even referred to as ‘America’s Most Haunted Asylum,’ and that the ‘Devil himself checked in there…’

Another infamous name who helped to contribute to the Taunton State Hospital fear factor was none other than Fall River native, Lizzie Borden. She had actually stayed at a jail that was right next door to the hospital, the story goes.

So, what do you think? Do you think America’s asylums have an inherent haunting? Could all of the negative energy that accumulated throughout the years have leeched into the land surrounding the hospital? Are the hauntings of Taunton State Hospital true?

If you’d like to read further about America’s most haunted asylums, start with our article about Waverly Hills Sanatorium!