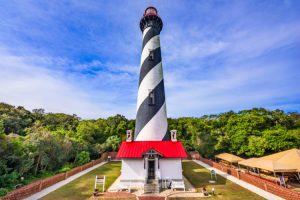 The St. Augustine Lighthouse was the first of its kind ever built in Florida by the new territorial American government. John Adams bought almost the entirety of Florida, taking it out of Spanish rule. His plan was the remodel and renovate the area, making it more open for tourism and hopefully easing the minds of the locals.

The lighthouse was constructed where an earlier watchtower used to stand. The watchtower was built by the Spaniards, and was meant to prevent attacks by pirates.

“The waters around Florida were a maze commercial and sea fairing trade routes. This not only attracted investors but a lot of pirates and privateers. When Sir Francis Drake attacked St. Augustine one of the first things the Spanish did after he sacked the colony was implement various beacons and watchtowers along the coast in order to prevent something like that ever happening again.“

History of the St. Augustine Lighthouse

In 1589, an Italian cartographer named Giovanni Battista Boazio published his map of the raid of Sir Francis Drake on St. Augustine three years prior. This map is the first documented reference of the watchtower. Between 1731 and 1762, the Spanish replaced the wooden watchtower with a new one made of coquina, or ‘ shell rock’ and wood. Ships coming from the north may have signaled an enemy arrival because Spain and Great Britain were often at war during this time. In 1763, the Seven Years War finally ended. Britain and the American colonies had defeated the combined forces of Spain and France. Florida was given to Great Britain and divided into East and West Florida.

The capital of East Florida was St. Augustine — a town of just 500 homes. Spanish residents fled to Cuba, and the British arrived at an empty town. They set about the task of settling and establishing trade routes right away. Grants of land were given to those who were willing to settle in Florida within 10 years.

The British quickly added to the watchtower, heightening it. At this time, shipwrecks in the area were starting to become a serious issue. On the night of New Year’s Eve in 1782, 16 ships wrecked while attempting to enter the harbor. These ships were a few of the hundreds that came down to St. Augustine packed with residents from Charleston, South Carolina. They evacuated after the American victory during the Revolutionary War. Following this evacuation, the population of British St. Augustine swelled to over 30,000 people, about the same size as Philadelphia at the time.

The rising population began to put a strain on the British. Governor Patrick Tonyn struggled to feed and protect everyone, and he eventually closed out British interests anywhere south of New York. Florida was given back to the Spanish in the 1783 Treaty of Paris. The town was again a military outpost on the fringe of Spain’s colonies.

Between the years of 1822 to 1867, the watchtower evolved into a lighthouse. Originally lit with a system of lamps and reflector panels, the light from lighthouses in America was harder to see from a ship than similar lighthouse beams that shown along the coast of Europe.

A French engineer by the name of Jean Augustin Fresnel perfected the Fresnel lens by 1822, changing modern optics forever. Nevertheless, the US Treasury was slow to adopt this improved system because of the expense of changing out the lenses. Instead, the light tower at St. Augustine was raised another 10 feet in 1852 in an effort to improve visibility.

Finally, by 1853, the St. Augustine tower was held a new fourth-order Fresnel lens. A single lard oil lamp, fueled by whale oil was used for light. During the American Civil War, (1861-1865) Confederate sympathizers living in St. Augustine removed and hid the lens and clockwork mechanisms in order to block Union shipping.

With sea levels rising, it was evident that the first St. Augustine Lighthouse would need rebuilding. Congress approved a $100,000 fund for the construction of a new lighthouse, and the work was finally finished in 1874. On October 15th, 1874, lighthouse keeper William R. Russell lit the oil lamp inside of the new Fresnel lens for the first time. The lens itself is 9-feet tall, and Russell would have had to climb inside of it to light it.

In 1980, a suspicious fire gutted the vacated keeper’s house, which had been declared excess by the government. St. Johns County was about to purchase the property and condominiums were discussed as one possibility for a best use of the land. As bulldozers threatened, in stepped the Junior Service League with a will to restore the property and open a maritime museum. The site was added to the National Register of Historic Places. Over the next 15 years, the Junior Service League would dig in hands-on and raise over $1.2 million to restore the keepers’ house, the lighthouse tower and the original Fresnel lens.

The history of the St. Augustine Lighthouse truly goes back centuries. With all of this history and conflict, it’s no wonder its considered the most haunted lighthouse in America!

Spirits of the Lighthouse

Once called the ‘Mona Lisa of Haunted Sites,’ the St. Augustine Lighthouse lives up to its name. The hauntings began during construction of the new lighthouse in 1871. Hezekiah H. Pittee was assigned the task and he oversaw most of the construction efforts. He had really restless children, and they often accompanied him to the job site.

On July 10th, 1873, the kids were playing on a work cart when it toppled over, crashing into the coast. The two eldest Pittee children, Eliza and Mary drowned.

According to staff of the lighthouse today, the playful spirits of these children still inhabit the lighthouse. Workers will often discover locked doors suddenly open, they report disembodied laughter in the middle of the night, and music boxes sold in the gift shop tend to pop open and play on their own. Tour guides also report increased incidences of being touched while showing visitors around.

Visitors also have their own experiences with these ghostly kids, and describe seeing a young girl dressed in period clothing gazing out of the lighthouse windows. Her spirit is said to be pleasant and friendly to guests. The same cannot be said of an other, less wholesome entity.

A terrifying specter called ‘The Man in Blue’ appears to workers, making their shift a living hell. One worked even refused to return after he was harassed the entire night by the man in blue. He chased him up and down the 219 stairs of the lighthouse. Many people believe that the man in blue is the spirit of the old lighthouse keeper, Joseph Andreau. He plummeted to his death at the lighthouse while painting the original tower in 1859.

Others state that this is the spirit of another keeper, a man so broken by the solitude of the job that he hanged himself inside of the tower. Visitors and staff describe the overwhelming scent of cigars on the landing of the tower. At night, strange bootsteps are heard when the lighthouse is otherwise empty.

So, what do you think? Do you think the previous lighthouse keepers remain here after death? Could their attachment to the structure be so strong that they’ll do anything to protect it, even if it means threatening staff and visitors or attempting to scare people away?

Have you ever visited St. Augustine Lighthouse? If not, join us for a ghostly tour of the Old City. Book your hauntingly fun tour at our website and learn all about the most haunted locations across St. Augustine.