Some Of The Most Violent, Strange, and Tragic Stories from Johnny Depp’s Bar, The Viper Room 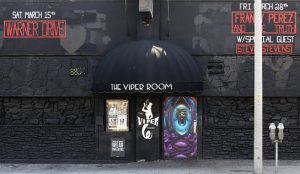 Anyone who’s anyone in Los Angeles has heard of The Viper Room on Sunset Strip in West Hollywood The now-haunted hotspot rose to its infamy after River Phoenix passed away in the bar on Halloween night in 1993 from an overdose. After the tragedy, his brother’s 911 call was broadcast all over the world. Since that day, the club has been in the hands of world-famous actor Johnny Depp, and has been a gathering place for Los Angeles’ celebrities. The Viper Room has also been the site of some rather unsavory activity — it was a place that put sex, drugs, and rock n’ roll on a pedestal.

But River’s tragic passing wasn’t the first. The Viper Room is well known for its sketchy history which includes mobsters, drug overdoses, disappearances, and even a gambling ring. To this day, the bar is riddled with rumors of bodies hidden in the walls and ghosts running wild.

Without further adieu, let’s dive into The Viper Room and explore its checkered past!

Looking to check out the haunts of Los Angeles for yourself, up close and personal? Join us for a Los Angeles Ghost Tour!

The passing of Hollywood star River Phoenix cemented the Viper Room’s sordid reputation. At just 23-years-old, River was poised to have a successful acting career alongside Leonardo DiCaprio when he collapsed outside of the Viper Room on October 31st, 1993.

On the night of his passing, River drank a speedball — a highly toxic mix of heroin and cocaine dissolved into his drink. He chased it with Valium. His skin reportedly turned grey, and after telling his friend he thought he was overdosing, he collapsed outside of the club in front of his siblings. After calling for medical attention, River later died in the hospital.

According to one waitress, she states that the Viper Room regularly hosted games featuring some of Hollywood’s most elite stars like DiCaprio, Ben Affleck, and Tobey Maguire. When this waitress started to take a cut from each game, it launched the Viper Room into the realm of organized crime. Mobsters assaulted her after she refused them a percentage, and she was eventually caught and received twelve months of probation.

It’s not the first time Johnny Depp has been near the hot seat of the federal court of law! In 1999, Johnny Depp found himself in the middle of a multi-million dollar lawsuit filed by his business partner Anthony Fox. Just days before he was to testify, the Edward Scissorhands actor mysteriously disappeared, along with his truck and .38 caliber rifle.

His truck was found 19 days later, but his body was never recovered. The disappearance remains a mystery. Since he disappeared so close to the day he was to testify, some believe that Depp exercised his power and is somehow responsible.

It’s not just the tragic passing of River Phoenix that attracts ghost aficionados to the Viper Room. The club was also a renowned mobster hangout and as we all know, where there’s sketchy history, there are probably ghosts.

In 2017, the television ghost-hunting crew Ghost Adventures paid the club a visit. During their investigation, they heard disembodied voices saying ‘I’m confused.’ They told the ticket-booth operator Rita about them, and she claims that this voice belonged to the ghost of River Phoenix, who passed suddenly and tragically at the club.

According to Rita, the spirit of River Phoenix isn’t the only entity inside the club. During Rita’s decade-long tenure at the Viper Room, she’s experienced some pretty unexplainable things:

“I’ve had my hair yanked, a hand on my leg. Oh yeah, they’re grabby, the guy ghosts. But there’s a chick ghost too, she was texting me once from a dead number. I’d talk out loud to her, and she’d text me a response. She was mad that I couldn’t see her.”

One bartender who had worked at the Viper Room for sixteen years said that he felt like the bottom bar had a different energy than the top — a more malevolent one. He said he felt a constant pressure in his chest whenever he was down at the bottom bar, and that he had even seen glasses fly off of tables on their own.

Some claim that the bar is the site of a portal, an opening to the spirit world that can’t be seen.

So, what do you think? Have you ever visited the Viper Room? Have the dark energies of Hollywood’s past endured a century of time? Visitors to the club today say yes, and the stories that still emanate from this serpentine structure surely corroborate those claims.