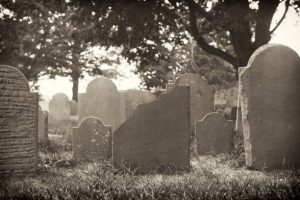 Whenever someone hears Salem, MA, they immediately think of the dark page in our history when the Salem Witch Trials took place. It was undoubtedly one of the saddest and cruelest times in our nation’s early history, making your head fall in shame. Suppose paranormal experts are to be believed anytime something as tragic as witch trials, burnings, and unwarranted killings of innocent people occur. In that case, it leaves a lot of dark energy at the place where such actions occur. This energy can sometimes be felt years, decades, and even centuries later. In most cases, the spirits of the people affected by the tragic events can also be drawn back to the places where they experienced the horror leading to their deaths.

To get a tour of this historic location, book a tour with Salem Ghosts.

Salem’s Old Burying Point Cemetery is where some people who participated in the Witch Trials are buried. It is one of the oldest cemeteries in the United States, with the oldest tombstone dating back to 1683. Popular belief is that the accused witches who were condemned during these trials are also buried in the cemetery. Unfortunately, this is a myth, as the condemned witches were denied a proper burial in those times. It is unknown what happened to the bodies of the 19 victims convicted and subsequently punished due to these witch trials. Still, locals assume that family members must have taken their bodies and given them a private burial on their lands.

The Spirit of the Lady in White:

If one were to visit the Old Burying Point Cemetery in Salem, MA, one would see tombstones of all sizes. It is said that there are more tombstones in the cemetery than the actual number of people buried there. When it comes to the spirits that linger around the cemetery, not all those are those of the people, known or unknown, who are buried. Some of these spirits do not appear to be related to the people buried in the cemetery but are perhaps attracted to the dark aura surrounding it. One such spirit is that of the Lady in White. Her identity is unknown, but people say she might be the spirit of one of the witches condemned to death during the Salem Witch Trials.

She is known as the Lady in White as she appears momentarily dressed in all white, and once her apparition is spotted, she transforms into bright orbs of light before disappearing. Although people have attempted to gather photographic evidence of the presence of her spirit in the cemetery, there is very little of it due to her disappearing tendency.

One of the people buried in the cemetery is a judge, the great ancestor of acclaimed writer Nathaniel Hawthorne who wrote such timeless classics as “The Scarlet Letter” and “The House of Seven Gables.” Judge John Hathorne was asked to confirm accusations of witchcraft in 1692 when they began in Salem Village. He was known to be harsh in his questioning and convinced of the guilt of those he questioned. He was also known as the “hanging judge” because he tended to abuse his power to commit murder.

His ghost is known to haunt Old Burying Point Cemetery, especially at night when visitors can see his apparition to the cemetery. He is also known to haunt the Witch House nearby, which belonged to his friend, Jonathan Corwin.

Perhaps, one of his worst moments as judge of the Salem witch hunt was when he sent a poor beggar woman, Sarah Good, to jail based upon accusations that she was a witch. Sarah was seven months pregnant and languished under horrible jail conditions during her pregnancy with no food or bedding. As a result, her child died a few days after being born in jail. Sarah also had a four-year-old daughter, who was arrested with her at the time. She was forced to confess and let go later due to her “confession.” However, her mother was executed as part of the trial against her.

It is reported that Sarah Good cursed the Reverend Nicholas Noyes presiding over her execution by saying, “You are a liar. I am no more a witch than you are a wizard, and if you take away my life, God will give you blood to drink,” and 25 years later it seemed those words rang true as the Reverend died of a hemorrhage that brought blood to his mouth and lungs.

Giles Corey was a wealthy farm owner in Salem at the time of his death. He was born in England but eventually migrated to the United States. He worked as a farmer when he first arrived; however, court documents from that time show that he had behavioral issues and got into trouble with the State. He went on to own farmland in his name and employed indentured servants to run his farm. Corey married three times and had several children. At age 65, he beat one of his servants to death and was convicted/fined for using “unreasonable force” in his treatment of his servants.

During the Salem Witch trials, he was 80 years old and living with his third wife, Martha, who was accused of practicing witchcraft. He became convinced of his wife’s guilt initially but later was charged with being a wizard himself and arrested for it. He refused to plead, instead opting to be tortured by heaving heavy slabs placed on his naked body, which eventually caused his death. He held on to his estate because he refused to plead during his trial. His wife, Martha, was executed three days later by hanging. Giles’ conviction was later overturned in 1712, although his wife, Martha, was not.

After their deaths, it is said that the town Sheriff, George Corwin attempted to extort money from his daughter and son-in-law as they came into possession of Giles’ estate upon his death. It is said that this action caused a curse to be left on the town Sheriff’s office as they all died from heart or blood-related illnesses, beginning with Corwin, who died of a heart attack. The curse only broke when the office was moved from Salem to Middleton. GIles’ ghostly apparition also haunts the old burying point cemetery and is known to show up when the town is about to undergo a disaster.

The Lady in the Blue Dress:

Another ghost haunting the old burying point cemetery is that of a lady reportedly wearing a powdered blue dress and carrying a picnic basket with her. Just like the ghost of the lady in a white dress, her identity is unknown, but she always appears in the back corner of the cemetery with a little boy thought to be her son. The little boy always wears shorts, a black shirt, and a hat. People have surmised that these ghosts are those of a mother and her young son who died in a fire.

However, the place where they appear tends to be a paranormal magnet, as other strange occurrences have also occurred at that spot. One recurring weird happening is electronic equipment malfunctioning, especially cameras at that site. A known symptom of paranormal activity. These strange paranormal occurrences could be tied to a deadly fire that broke out at the Charter Street Inn that stood at the spot where the ghost of the lady in the blue dress appears. It is said that the woman and her son escaped while the husband tried to put out the blaze unsuccessfully. When the lady and her son went inside to help the husband, he had already died. Source

The Salem Witch trials are undoubtedly one of the darkest chapters in the history of Salem, MA, and the country. They also speak to how human nature, when deprived of the little joys of life, can turn dark, murderous even. It is also a story of collective misogyny, greed, personal vendettas, abuse of power, and religious fanaticism that led to the loss of 19 lives in barbaric ways. Reading about the Salem Witch trials makes readers think about how easy it can be for people to rile up an entire town to satisfy personal vendettas or punish others for not being able to meet debt obligations.

It’s a story about humanity at its worst moments in time. While there are lessons to be learned from this chapter in our history, it’s important to remember that these dark chapters never really leave us. Their darkness endures in the form of restless spirits, hauntings, and other paranormal manifestations that people can witness years, decades, and even centuries later. They remind us to take caution from the darkness surrounding us.