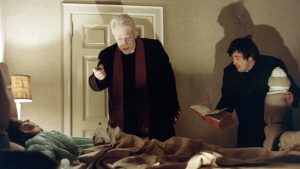 Do you believe that truth is stranger than fiction? If not, you will after you read this article. Most of Hollywood’s most popular stories are based on real-life circumstances. In 1973, a movie was released that took the box office by storm. The Exorcist is hailed as one of the most terrifying films ever made, but few realize that it was based on true events. Read on to learn about the story of Roland Doe.

Roland Doe, or Robbie Mannheim, was a case that happened just outside of Washington D.C., where Roland lived with his parents and grandmother. Starting in 1948, life started to change for the Mannheims when strange occurrences started happening surrounding the boy. The family began to report scratching sounds on the walls and under Roland’s bed, the violent shaking of the bed, and furniture moving on its own whenever Roland was around.

Roland’s behavior also started to take a turn for the worst, becoming physically violent with his mother and even defecating on the walls of the home. He also started to have aversions to sacred and religious objects, such as crosses and paintings of religious figures.

Thinking their child was suffering from behavioral problems, the Mannheims took Roland to be evaluated by both a psychiatrist and medical doctor, both of which unable to find anything physically or mentally wrong with him. Desperate for answers, they turned to their religion and contacted their Lutheran minister, Reverend Schulz.

The Reverend requested that Roland stay the night at his home to see if he could observe any of the bizarre anomalies. He later reported that when Roland was there, the bed he slept in shook so violently that Schulz was forced to remove him from it. He also reported that Roland had been violently ejected from a chair he was sitting in. By this point, Reverend Schulz was convinced that something unexplained was afoot.

Reverend Schulz directed Roland’s parents to the Catholic Church, who said they would be able to help Roland.

Roland met with a young priest named Friar Albert Hughes. Hughes was convinced there was something evil inside of Roland when a telephone flew off of his desk and across the room when he and Roland were talking. He also claimed that Roland spoke to him in Latin and that the temperature in his office would drop anytime Roland would come in. Hughes was soon cleared to perform an exorcism after he convinced the local archbishop of Roland’s condition. What happened next is truly unbelievable.

It was at Georgetown University Hospital that Hughes readied himself and his faith for the exorcism of young Roland. It was only a few minutes into the process that Roland became extremely violent and stabbed the priest with a broken bedspring. Hughes required over 100 stitches as a result, and never made another attempt to clear Roland of his possession. (Who can blame him!)

After being sent home from the hospital, Roland’s concerning behavior continued at home. The situation climaxed when Roland had a screaming fit in the bathroom, in which the word “Louis” appeared in welts on his chest. When Roland’s mother asked him if the message meant “St. Louis,” where the family had relatives, another word popped up In welts spelling out the word “yes.”

It was around this time that one of Roland’s cousins, currently attending the Jesuit-affiliated St. Louis University, spoke with one of her professors about Roland’s condition. This ended up with a Friar named William Bowdern and Friar Raymond Bishop heading to Roland’s home to evaluate him for demonic possession. It seemed as if Roland may get the help that he needed.

After evaluation, the priests decided that Roland was indeed possessed, and scheduled an exorcism, hoping that this time it would work. Armed with a team of nine priests and 48 witnesses, Roland was subjected to the exorcism rite 30 times over six weeks. During this time, he was violent, spitting at priests and speaking in a low, demonic voice. His bed shook uncontrollably, and the words “evil” and “hell” appeared in welts on his body.

After the last exorcism was completed, witnesses of the rites reported hearing a loud shotgun blast as the boy shook uncontrollably, before returning to normal.

Roland grew up to be completely normal, with no recollection of his possession whatsoever.

Roland’s case isn’t the only one — exorcisms have happened throughout history all over the world. While movies sensationalize and popularize these cases, one must remember how painful, scary, and serious demonic possessions are believed to be. So, the next time you see a movie that is based on a true story, do a little bit of research and learn about the people behind the film.