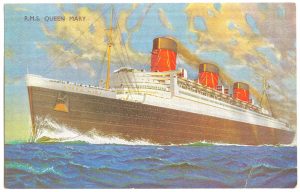 The R.M.S. Queen Mary spent three decades transporting the rich and famous across the Atlantic before retiring in 1967.

She survived the Great Depression and World War II, and managed to avoid the tragic fate of her cousin, Titanic. But under the glitz and glamour, this haunted ship is hiding several dark secrets.

It was sunny day in 1936 when the Queen Mary departed from England on her maiden voyage.

She offered all the finest amenities: exquisite dining rooms, swimming pools, daily radio broadcasts, a kennel for the passengers’ dogs, a children’s nursery — even a hospital. And she was fast. Boasting a top speed of 32 knots, she could travel from England to New York in four days.

Her parent company — the recently-merged Cunard-White Star Line — was desperate for success. Cunard had gone broke during the Great Depression, and the White Star Line was still scarred by the Titanic and Britannic. Their fates rested on the Mary, and it seemed their luck had finally turned.

The R.M.S. Queen Mary dominated transatlantic travel, holding the Blue Riband from 1938 to 1952, and welcoming celebrities, politicians — even royalty.

But the world was in turmoil.

At the outbreak of World War II, the famed ocean liner became a military transport ship, hauling between 5,000 and 15,000 soldiers across the world. And that’s when things took a dark turn.

Death Aboard the Mary

At least 47 people died aboard the Queen Mary during her time at sea.

A young crew member named John Pedder was crushed by a door during an emergency drill. Another died after drinking gin that turned out to be cleaning fluid. The rest died of natural causes.

That’s what the official records report.

But hundreds of others are said to have died on (or at the hands of) the Queen Mary prior to her retirement.

In 1939, the ship was drafted into military service. Britain believed her size and speed would keep her safe from German U-Boats, and they were right. It’s rumored that Adolf Hitler offered a $250,000 reward to any submarine captain who could successfully sink her.

But the Queen Mary’s efficiency came at a cost. She was pushed to the limit, often cramming 15,000 soldiers into spaces designed for 2,200 passengers.

She was stripped of her fine decor and amenities in order to create more space. Her bright smokestacks were painted navy grey and her portholes were blacked out and welded shut. The transformation earned her the nickname “Grey Ghost.”

In the summer, soldiers slept shoulder-to-shoulder above deck and took turns sleeping in bunks below deck. The lack of airflow made the cabins suffocatingly hot. Some soldiers died from heat exhaustion. Others jumped ship.

The Mary was no longer a luxurious cruise ship; it was hell.

Legend says the staff went half-crazy too. One rather gruesome rumor is that galley crew locked the chef in his own oven one night, roasting him alive.

Though there are no records of the chef’s demise, there is substantial evidence that the Mary was responsible for deaths of over 300 men.

In October of 1942, the famed ship accidentally collided with the HMS Curacao, a much smaller cruiser that was escorting her around the Irish coast.

The Curacao was zig-zagging in front of the Mary, hoping to throw off any potential missile attacks, when the 82,000-ton ship mistakenly plowed into it, breaking it in half. Some of the crew died instantly. Others drowned or succumbed to hypothermia in the freezing water.

The Mary never stopped to rescue them, as it would have compromised the thousands of soldiers on board, and an estimated 329 men died as a result. The truth of what happened was sealed until the war ended — three years later.

By then, the Queen Mary had undergone a 10-month renovation that erased any remnants of military life. Paintings, fine china, and art deco furniture were returned to the cabins and dining rooms. She was ready to dazzle the rich, famous, and powerful once again.

But all of the expensive decor in the world couldn’t bury what had happened during the war. The Queen Mary was a haunted ship.

The ship is reportedly haunted by over 100 spirits, the most infamous being the spirit of Stateroom B340, where paranormal activity is so frequent and intense that some members of the crew refuse to go inside.

Everyone seems to have their own story about who or what haunts the room.

In 1948, a third class passenger named Walter J. Adamson mysteriously died there. Is it his ghost that haunts the place, or was he killed by the ghost?

Another theory claims staff locked a man in his third class room after he murdered two women in the 1960s. During the night, he began beating on the door, screaming to the guard outside that something was in the room with him. When they opened the door in the morning, they found his bloody, mangled body. He had been ripped apart.

When the ship was retired in 1967, three third class rooms were combined with to create a larger hotel room — B340. Not long after, guests began reporting odd things.

One woman said she was woken when the bedcovers were ripped off of her in the middle of the night. She then saw a man looming over the end of the bed. Others heard phantom voices and complained that the faucets turned on by themselves.

The ship received so many negative reports throughout the 1970s that B340 was closed to the public for over 30 years. It was reopened as a “haunted attraction” in 2018, though the key comes with a fierce warning.

Even the current captain is too scared to enter.

Other haunted areas include the former First Class Swimming Pool, Boiler Room #4, and the doorway where John Pedder was tragically crushed during an emergency drill.

Pedder’s ghost is often spotted wearing blue coveralls. Sometimes he’ll run behind people, whistling, as if warning them. Other times, he’ll ask guests if they’ve seen his wrench. When they turn back to him, he’s gone.

The sheer amount of ghostly activity aboard the Queen Mary has earned it the title of “most haunted ship in the world,” and it attracts as many paranormal fanatics as it does history buffs.

Still, even in the light of day, there’s something creepy about Mary. The ship is a relic of a bygone era.

By the 1960s, commercial flight had become the preferred method of transportation, and the thriving ocean liner industry had gone dry. The golden years of transatlantic travel were over.

Despite her 1930s luxuries, the Queen Mary couldn’t compete with modern cruise ships. Cunard eventually made the difficult decision to sell her to the City of Long Beach, where she would serve as a tourist attraction and hotel.

With the exception of a few modern updates, the Mary still looks like she did in her heyday — grand and glamorous. It’s known as the “ship of woods” due to the impressive number of mixed woods used in its construction.

As you walk up to its massive black hull, you might feel the same rush of excitement that coursed through passengers the day it was launched. On that May morning, the Queen Mary was still innocent and hopeful.

But this haunted ship holds as much evil as it does hope now. Marred by war, neither time nor renovation can bury the dark secrets of the R.M.S. Queen Mary.