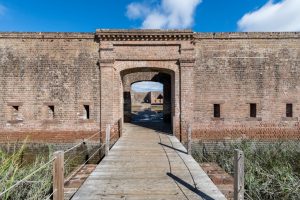 Savannah has been front and center to more than just a few wars and battles. The Revolutionary War, the War of 1812, the Civil War, and countless battles with Indigenous tribes. These have all left the streets of Savannah soaked with blood. Savannah was established in a well-defended harbor, near the alligator-infested swamps of the Savannah River. Old Fort Jackson was built as an extra security measure to defend Savannah from attacks from the sea. The fort did a great job, seeing numerous enemies but only failing one time. Fort James Jackson hasn’t seen a battle for over 150 years and it now serves the community as a history museum.

The fort may have a new use, but the spirits of the past remain just the same. One of the most active ghosts is that of a man named Private Garrity. He bludgeoned one of his superiors in an attempt to murder him. He then tried to escape, and drowned in the process. Sounds kind of clumsy, but Garrity’s ghost should not be underestimated. He’s known to appear often to tourists and museum staff, scaring the daylights out of them as he’s only ever seen as half a body!

(If you’d like to come face-to-face with some of Savannah’s most infamous haunts, join us for a Savannah ghost tour!

Before Fort James Jackson was built, another British fort stood in its footprint. In 1808, Thomas Jefferson commissioned the construction of a fort at the site as they saw a need to defend Savannah from the possibility of another British attack. The fort was named after James Jackson, a British-born but pro-American politician. He found for the Americans during the Revolution and then later served the state as a Georgia senator. He eventually went on become to become the 23rd Governor of Georgia. Jackson passed away just a few years after his namesake fort was finished.

Construction finished in 1812 just as another war broke out, just in time it seems. President Madison was pressured to declare a war while the British were out at sea seizing American ships. Fort Jackson held soldiers during the war, and even though it resulted in a draw, the soldiers stationed at the fort successfully defended Savannah once again.

Old Fort Jackson was great at defending seaside, but land-based attacks were just too much to handle. General Sherman began his famed ‘March to the Sea’ in late 1864 after he captured Atlanta. Sherman began his advance towards the coast and followed a ‘scorched earth’ policy where anything even remotely useful to his enemies was destroyed on sight. His troops burned bridges, stockpiles of food, ammo, and even liberated tens of thousands of enslaved people. Sherman’s men then betrayed the freed slaves as they crossed Ebenezer Creek.

In December of 1864, Sherman and his army finally arrived at the coast. Before they marched into Savannah they surrounded it, forcing the mayor to surrender. The first order? To capture Fort Jackson. The Confederate soldiers at the fort were forced to flee, leaving the fort abandoned. After the Civil War, the fort was barely used. The name was switched in 1884 to Fort Oglethorpe but was changed back in 1905. The city of Savannah bought the fort in 1924 with plans to turn the land into a gorgeous public park. The fort was restored in the 1970s and is now a museum open to the public. The museum does Civil War reenactments and daily cannon demonstrations! It was declared a historic landmark in 2000.

Spirits of the Fort

Before General Sherman captured the fort, a new recruit named Patrick Garrity was charged with guarding the fort’s drawbridge. He hated his superior, George Dickerson. No one is sure the reason for his disdain for the Lieutenant, but many speculate that Dickerson was anti-Catholic and anti-Irish, mistreating Garrity and his peers for their beliefs.

One night as Dickerson was headed back to the fort, Garrity seized the moment and snuck up behind the Lieutenant and hit him in the head with his musket. He broke his skull in four places. Dickerson hit the ground and Garrity just kept hitting him until he broke his musket.

Nearby soldiers noticed the attack and Garrity dropped his gun, taking off for the Savannah River. He was too tired to swim and ended up being overtaken by the strong current. He drowned. Dickerson survived the attack and woke up minutes later. He ended up stepping down from his post.

These days, Private Garrity’s ghost roams the fort. He often appears in the same spot that he attacked Dickerson. At first glance, visitors think his spirit is part of the war reenactment crew since he is seen in Confederate attire. He’s only visible from the waist up, startling those who see him.

The reenactment crew has an annual award for the best actor, and it’s called the Garrity Award. It’s shaped like the musket Garrity used to kill Dickerson. Every year something strange seems to happen to the award. Either it goes missing, or it mysteriously ends up broken. The missing award is usually found near where the incident occurred.

Other Ghostly Soldiers of Fort Jackson

Many soldiers were stationed at the fort over the decades, and more than just Garrity have stayed behind. American and Confederate soldiers have been seen around the fort guarding the posts they did during their lives. Staff have encountered them up close, claiming to feel a deep dread right before they appear. Quite a few of the museum employees have quit on the spot after their ghostly encounters. Tourists report the feeling of being followed and the sound of phantom footsteps right behind them.

One ghostly encounter involved a newly hired cleaning woman. On her first day, just after the museum had closed, she began her rounds. Not long after, she started to hear unexplained noises, she stood up to see what was causing the noise but when she turned around all she saw was a full-bodied apparition of a soldier standing in a doorway. The soldier glared at her and then vanished into thin air. She left that same moment and never returned to the job.

When walking around the fort, its easy to become overwhelmed and unsettled. The air itself is heavy, a scar left over from the death and tragedy that the fort has endured.

If you’re looking to visit Old Fort Jackson, it is a museum open to the public and they do offer history tours. Old Fort Jackson is the oldest standing brick structure in the entire state of Georgia and is one of eight forts buily in the country as part of the ‘Second System Fortification’ that was done just before the War of 1812. If you’re into war history and ghosts, Old Fort Jackson is your answer — but if you’d like to delve even deeper into the historic hauntings of Savannah, then a ghost tour with us is your best bet!