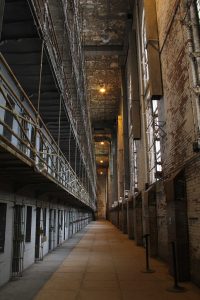 A legendary structure, the Ohio State Reformatory was designed by Cleveland architect Levi Scofield. Scofield designed the building to be inspiring and intimidating in tandem. The Reformatory once by the name “Intermediate Penitentiary” since it accepted inmates who were too old for the juvenile corrections facilities but had committed more minor crimes than those sent to the Ohio State Penitentiary. The facility admitted its first inmates in 1896 after a long ten-year construction.

The goal of the reformatory was exactly as the name states — to ‘reform’ or ‘rehabilitate’ the inmates who came through its doors. Inmates received religious studies, education, and learned a trade while at the reformatory. Inmates were admitted first for 18 months, and if they started to show progress they were then released. If no progress was made they received another 18 months. This model of reform was successful and Ohio State Reformatory had a high success rate. To get up-close and personal with Ohio’s haunts, why not join us for a ghost tour in Cincinnati?

Also known as the Mansfield Reformatory, the prison was built between 1886 and 1910 and remained in operation until 1990 when it was ordered to be closed by a court ruling. The field in which OSR is built was once used as a training camp for Civil War soldiers. The camp was named Camp Mordecai Bartley in honor of the Governor. In 1997, Mansfield was selected as a candidate for the new penitentiary. The city raised $10,000 and purchased 30 acres of land for OSR to be built upon.

The structure was built with three architectural styles in mind — Victorian Gothic, Richardsonian Romanesque, and Queen Anne. It was designed with these unique styles to help encourage inmates to be reborn back into their spiritual lives, leaving behind their lives of crime for good.

On September 15th, 1896, the OSR took in its first 150 inmates. They were immediately put to work on the prison’s sewer system and the 25-foot stone wall that surrounds the complex. OSR remained fully operational until 1990 when it was closed as a result of a prisoner class-action lawsuit that stated overcrowding and inhumane conditions.

The facility has been used as a location for many film and television productions but it is best known for its appearance as Shawshank Prison in the film The Shawshank Redemption. For an even creepier backdrop, take a trip to Ohio’s ghost town, Poast Town.

The Darker History of the Ohio State Reformatory

The Ohio State Reformatory transitioned over its lifetime into a high-security prison. This change brought droves of violent prisoners within its walls. Riots between prisoners were commonplace, as tensions were high in the dirty and overcrowded prison. Inmates often fought one another to the death. Increasing population and understaffing brought a series of torturous punishments. The most infamous tale that has come out of the prison is that of ‘The Hole.’ This was a tiny cell in which inmates were held for three days or more when they were punished for ‘bad behavior.’ By the end of their 72-hour stay, not one of them made it out alive. Other punishments included a ‘sweatbox,’ water tubes, and ‘the butterfly,’ an electrical shock device. That’s only the tip of the iceberg of the vestiges of misery acquired over the century-long operation. The active spirits who suffered here continue to haunt the cellblocks unapologetically.

The building has borne witness to atrocities against humanity — abuse, human rights infringements, murder, and suicides plenty. This has led to countless hauntings, trapped spirits, dark energies among other unexplainable phenomena.

Hauntings At the Ohio State Reformatory

There are countless spirits at the Ohio State Reformatory. Most of which are heavily documented and evidenced. Even during the brightest, sunniest day, the OSR is bone-chilling.

The basement of the prison is home to two entities. One lost his life tragically, and one is sinister. According to the story, a 14-year-old boy was beaten to death in the basement back when the OSR was a reform facility for minors. His apparition is seen as a shadow that flickers quickly across the walls and ceiling, staying just out of view. While the energy of the young boy is reported to be light and harmless in nature, the other entity in the basement is heavy and dark. This entity is thought to be that of the murderer of the 14-year-old, a century-old power-play still at work.

As one would expect, The Hole is a melting pot of entities and ghostly happenings. Inmates who were punished to The Hole were not allowed to leave their cell for 72 hours. The Hole had no natural light and was known to push people to the brink of complete insanity. On one occasion, a guard sent two prisoners to The Hole, with only one emerging. After all is said and done, over 100 prisoners were sent to The Hole, most of which never came out alive. Visitors to the OSR report feeling cold spots, nausea, and breathing down the back of their necks when they enter The Hole.

Another room, known as The Chair Room is an unassuming and strange location within the Ohio State Reformatory. It is a windowless room with a random chair facing the door. Reports tell of a nefarious entity in this room, one of the darkest in the entire prison. Some visitors have provoked the spirit in the room, leaving with scratches covering their bodies.

The cellblocks themselves are the most active, as that is where inmates spent most of their time. The tiny cells were notoriously overcrowded, where inmates suffered miserable existences. Suicides were common, and in 1930 a large fire broke out, killing 330 people and injuring 200 others. Those who survived the fire were confined to an attic space, covered in painful, hot burns that were prone to infection based on the conditions.

The East cellblock is infamous for its suicides. One of these tragic endings was that of James Lockhart. It is said that he had less-violent offenses than that of his cellmate and was experiencing bullying and threats. To escape his fate, he stole a turpentine can and set himself on fire. No one could do anything to put the fire out, and other prisoners simply had to watch a man burn alive. Larry Haymer, a prisoner who was a week away from a transfer, made a noose out of bedsheets and hung himself on the railing of the cellblock. The aura of the prison echoes these tragedies into the present.

Pretty much anyone who steps foot into the Ohio State Reformatory has some sort of unexplained experience. Whether that be a sudden nausea setting in or physical manifestations of dark entities on their skin, the OSR is infamous and well-known in the ghost hunting community for its dark and mysterious energies. Perhaps the years of abuse and tragedy have opened the doors for darker entities to commune here — and while we’ll never know for sure, there’s only one way to find out.

For an in-depth look at another Ohio haunted hotspot, check out our article about the Athens Asylum.