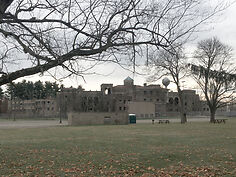 Something about abandoned hospitals and asylums truly chills to the bone, the knowing of the lives lost and the illness experienced leaves a bad taste in anyone’s mouth, as well as a negative imprint on the physical land. Molly Stark Sanatorium is a perfect example of this — an overgrown cement behemoth, overtaken by various ivy and other creeping flora.

Most asylums of the past were constructed in a way to allow for nature to coexist with patients, as the belief was held that sunlight and fresh air were necessary for patient recovery. Surely they didn’t plan for nature to drown out almost all evidence of human involvement.

Molly Stark Sanatorium is a former tuberculosis hospital located in Stark County, Ohio. It was named after the wife of General John Stark and was constructed to house the growing number of tuberculosis patients in the area.

Stark County began to prepare for a tuberculosis hospital after it sold its interest in the Springfield Lake Tuberculosis Sanatorium in Summit County, Ohio. A $750,000 bond was issued to the construction, passed by local voters in 1927. Plans for a 150-bed asylum were set into motion after it was approved by the state commission on April 27th, 1927.

Albert Thayer, an architect from New Castle, Pennsylvania, was hired to undertake the design and construction. The facility cost $600,000 at its completion and provided a much-needed respite for those suffering from tuberculosis.

Molly Stark Sanatorium opened its doors to its first patients on August 23rd, 1929 during the dog days of midwestern summer. The Spanish Revival-style asylum boasted large windows, balconies, and verandas to provide plenty of fresh air and sunlight to patients who resided there. The campus also included a children’s hospital, a nurse’s quarters, a superintendent’s resident as well as a power plant. The campus even has 1,200 feet of tunnels underneath the property to provide buried infrastructure — although some believe it was a way to transport bodies of the deceased out of the hospital without lowering patient morale.

Bedridden patients in need of specialized care were sent to the upper floor. As their health improved, they were transferred one floor lower until they reached the ground level. The lowest-floor patients were allowed to roam the grounds. The second floor contained a large assembly room that allowed for gathering and had a library, radios, and even a game room.

The hospital was given additional and expanded east and west wings to accommodate more patients, and its capacity increased from 128 to 230. Governor Frank Lausche had lost a brother to tuberculosis and praised the construction of the expansion. Molly Stark’s administrator had numbers to back up the claim of efficiency and noted that the number of deaths from tuberculosis had dropped from 153 in 1946 down to 43 in 1951.

By the time the 1950s rolled around, antibiotics allowed for the treatment of tuberculosis, and the need for specialized asylums like Molly Stark Sanatorium dwindled. In 1956, the name was changed to Molly Stark Hospital and began to admit non-TB patients. As staff resignations and the fiscal deficit grew, the hospital finally closed in 1995.

Many plans were put on the table for the shell of the sanatorium — apartments, assisted living facility, even retail space was an option. With a price tag of just over two million dollars to remove asbestos, however, most developers backed out of their deals. In 2003 the county hired a contractor to determine how much it would cost to rehabilitate the facility. They came back with a staggering ten million dollars in repairs. What would happen to Molly Stark?

On October 2nd, the county park board offered one dollar for the hospital and its grounds. Now a county park space, $200,000 was received for cleanup of harmful asbestos and other environmental issues.

The Sanatorium had seen a plethora of death and now decay throughout its tenure, and the energies run deep into the hidden passageways that run under the structure. The asylum is now surrounded by rusted chainlinks, topped with barbed wire, a warning, but a beacon. Visitors to the state park climb through a small hole in the fence, evidence of other holes patched up throughout the years, but this one left alone, an invitation to urban explorers.

One of the most haunted areas of the Sanatorium is the dank, dark lower level. Even though these rooms held the healthiest patients, it seems as if the heavy energy from the floors above seep down into these stone cells. During our investigation, we encountered numerous patient belongings, prescription drug insurance sheets with patient names and dates of birth, countless articles of old clothing that forever tie these souls to the sanatorium.

Disembodied voices echoed throughout the halls during our visit, and unexplained footsteps were heard throughout the facility (no other visitors were inside at the time). Some reports state that there is an unmarked graveyard on the property, filled with graves of patients who passed away at the sanatorium that were never claimed by their families. This is unconfirmed, but the level of activity as the sanatorium says otherwise.

Upon further exploration of the grounds, one will find what was one the children’s hospital. A truly melancholy place, young lives were surely lost within its halls. The children’s hospital was inky-black, with collapsing ceilings and fallen stairwells. The hospital keeps visitors out, as it’s too dangerous to venture too deep inside — but one wonders what secrets are hidden in the rubble?

Today, the asylum sits in a state of total decay. Its bones are rotting, pieces of the original structure falling into itself. A stark reminder (no pun intended) of the history of hospitals in America and the darkness they bore witness to. For more on haunted sanatoriums, check out our article about Canada’s Tranquille Sanatorium.