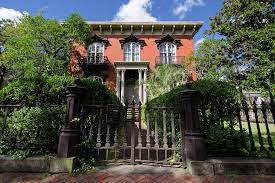 The scene of a violent crime, the Mercer House, now known as the Mercer Williams House Museum is a Savannah legend. The home saw more than one tragic death, and is one of the city’s most mysterious locations. The events that have occurred at the Mercer Williams House are an obvious indication as to why the home is so haunted today. The home is most associated with its mentioning in the John Berendt novel ‘Midnight in the Garden of Good and Evil,’ which was later picked up by Clint Eastwood and adapted into film. The home holds a burning secret, one of love and betrayal.

As a result of its storied history, the home has become somewhat of a famous attraction in Savannah, attracting tourists from all over the world, seeking to uncover what is hidden in the home.

The home was designed by John S. Norris for General Hugh Mercer (great-grandfather of the songwriter Johnny Mercer) Construction of the home began in 1860, interrupted by the American Civil War, and finally completed around 1868 by it’s new owner, John R. Wilder as the Confederate General was unable to finish his dream home. Nobody of the Mercer name actually lived in the house.

During a period of time in the 20th century, the home was Savannah’s Shriners Alee Temple. After the Shriner’s tenure, the home lay vacant, resting, waiting for a new owner who finally came in 1969.

JIm Williams purchased the home. He was a well-known antique dealer and preservationist. He absolutely loved Savannah, and in this love affair he purchased three homes on Savannah’s East Congress Street. In just 35 years, Williams bought and restored over 50 homes, including the Mercer-Williams house.

After a tow year restoration process, Williams was successful in bringing the Mercer-Williams home back to her former glory. He was so satisfied with his work that he decided to make the home his permanent residence. He threw extravagant parties at the home, bringing folks from all over Georgia to come and enjoy his pride and joy.

The good times were soon to come to an end, however.

Murder at the Mercer Home

In 1981, Jim Williams shot and killed his assistant and lover, Danny Hansford, a former prostitute with a sketchy past. Williams was charged with the murder, and was tried four times for the crime. The first trial came back with a sentence of life in prison, though many people speculated he was only convicted because he was a gay man. The judgment was later overturned due to conflicting police reports. The third trial ended in a hung jury, but the fourth and final trial ended up with a not-guilty verdict. Jim Williams was a free man.

Six months passed when Jim was overcome with pneumonia and died of heart failure in the home. Allegedly, he dropped dead at the same spot where Hansford was shot. A coincidence, or the work of a vengeful spirit?

No one else was ever convicted of Danny Hansford’s murder, leaving his spirit restless and active, seeking justice in the afterlife.

Hansford and Williams weren’t the only ones who perished in the Mercer-Williams House. In 1969, even before Williams purchased the home, a boy named Tommy Downs, 11, entered the abandoned house looking to chase birds. He fell, landing on the wrought-iron fence below, impaling his head with one of the fence spikes. Speculators say that Tommy could have been pushed from the balcony, or even thrown off the roof to his grisly death. No evidence supports anything more than a tragic accident, but the questions still linger.

Phantoms of the Mercer-Williams House

Savannah as a whole is truly haunted. It is the oldest city in Georgia, and houses more death and tragedy than the entire state’s cities combined. Reports out of the Mercer-Williams Home include sightings of apparitions, disembodied voices, the unnerving feeling of being watched, and phantom footsteps.

The Mercer-Williams House is now a museum, and staff are not so excited about the home’s haunted reputation. The current owner of the home, Dr. Dorothy Kingery (Williams’ sister) doesn’t speak too often about the stories of her brother, and is even more quiet when it comes to the ghostly happenings at the home. She states that she has never had a strange experience within the home, but that doesn’t discount the countless reports coming from guests and visitors to the museum.

The most famous specter is that of Jim Williams. With his reputation as a murderer, visitors to the home fear coming across his spirit. Years after the trails, Judge George Edward Oliver, who was the presiding judge over the trials, said:

“That son of a gun Jim Williams was absolutely guilty of cold-blooded murder. I don’t blame him, though, that boy he shot was trouble with a capital T.”

Since Williams’ death, staff in the home have seen his apparition time and time again. He always appears fully, his entire body in ghostly form. He is usually seen walking up and down the hallways of the house.

The Vengeful Spirit of Danny Hansford

Allegedly, after the death of Danny Hansford, Williams sought the help of a Voodoo practitioner to rid the home of Hansford’s spirit. The cleansing of the house did not seem to take, as sightings of Hansford are common, even today. His spirit is also seen pacing the hallways, these two men like ships in the night, passing by each other for eternity without knowing it.

An especially grim haunting, this one is believed to be residual. Reports state that Tommy’s spirit is seen re-enacting the final moments of his life, caught in a loop, falling off the roof and onto the iron spikes over and over again. The boy’s sister recounts the tragedy, stating that it did indeed happen. She remembers the medica attempting to cut the iron fence, trying to save Tommy’s life.

The Mercer-Williams House is well-known for its photo phenomena. It is said that when photos are taken of the home, ghostly images appear in its windows, during all hours, day or night. Some have claimed that these reflections look like a young boy, while others claim that they see grown men peeking out of the windows onto the street below.

Even after his death, reports of loud, wild parties have come from the house, even though it lie empty and abandoned. Neighbors complained of loud music, laughing, and carrying on late into the night, unable to find where the sound was coming from. Williams was known for his party-animal spirit…. could this have been him?

Anyone who sees the Mercer-Williams House is stunned by its timeless beauty. If you’re dying (no pun intended) to visit the home, you’re in luck. It is open to the public as a museum, located at 429 Bull Street. Questions about the spirits could grant you dismissal, so if you’re going in search of any otherworldly entities, mum’s the word.

The Mercer-Williams House is one of Savannah’s greatest historical landmarks, and also one of the most haunted houses that can be found all across the city. The home is filled with strange energies, intrigue, unsolved crimes, and unanswered questions. Did Williams kill Hansford — if so, why?

Some of these answers will only come from the spirits themselves… so if you plan a visit to the Mercer-Williams House, be sure to listen closely.

For another haunted Savannah hotspot, check out our article on the Bonaventure Cemetery, where a statue is said to cry tears of blood!