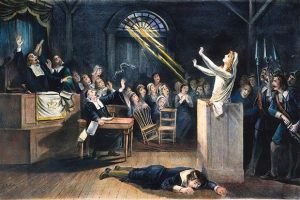 t’s 1682 in Massachusetts and the witch trial hysteria is beginning to pick up speed. Women, men, and even dogs were being accused of witchcraft left and right — for reasons unfounded. Mary Webster was one of these women, accused and brought to trial when she was approximately 60 years old. Her story is unique, as even though she was cleared of charges, she was still hanged by her fellow townsfolk — and survived.

Nine years before the Salem witch trials began, accusations of witchcraft were fairly common. Even if a ‘witch’ was cleared of their accusations, this didn’t lift suspicion in the public eye. The Puritans believed that ‘disturbing’ witches, with meant beating and restraining them, would prevent them from casting any spells. For Mary, disturbances were part of her daily life, and the death of a prominent Puritan citizen even almost got her killed.

Mary Webster was born Mary Reeve, the daughter of Thomas and Hannah Reeve in England around 1624. The family ended up in Springfield, Massachusetts and Mary found love and married William Webster in 1670. He was 53 and she was 46, a strange time to become wed in those days. They lived in the Puritan town of Hadley. William and Mary weren’t the richest of citizens, and often needed help from the community to survive. Her husband was actually one of the sons of Hadley’s founders, but somehow had lost his property and fallen into indigence. Poverty did not stop Mary’s fiery personality and temper and was described as being soured with the world. This was a perfect storm for accusations of witchcraft. An angry woman who talked back was a woman with a target on her back.

Mary Webster was accused of putting a spell on cattle and horses so that they wouldn’t come near her home. The animal drivers found her and ‘disturbed’ her so that the animals could pass by. Once neighbors saw a scald mark on her body (which was actually just a burn from boiling water) they immediately called it a ‘witches’ mark’ and the accusations started flying.

End of March, 1683, the county court magistrates examined Mary on suspicions of witchcraft. They didn’t feel they could handle the matter and so Mary was sent to Boston in April. She waited in jail until her court date on May 22nd, when evidence against her was heard by 11 men. They decided to indict her stating:

“for that she, not having the fear of God before her eyes, and being instigated by the devil, hath entered into a covenant and had familiarity with him in the shape of a warraneage, [fisher or wild black cat of the woods] and had his imps sucking her, and teats or marks found on her.”

Witches were believed to suckle their ‘imps’ or ‘familiars’ or even the devil himself in exchange for their magic.

At her trial on June 1st, the court found Mary not guilty and she was returned to Hadley. Unfortunately, the town of Hadley had already made up its mind about Mrs. Webster.

Mary Webster still faced extreme persecution at home. A year and a half after she returned to the town, a prominent Hadley citizen named Philip Smith died a painful death. Mary was blamed. Apparently, the two had a less-than-great encounter: Mary was on the roads, begging, and she was less than thrilled with Smith’s offering to her. Because of this, he and others believed that she had bewitched him, causing his illness.

Cotton Mather, notorious for supporting the Salem Witch Trials, devoted an entire chapter in his book to Smith’s last days and how mysterious the circumstances were that surrounded them. Mather whole-heartedly believed that Mary was responsible for Smith’s death, and the people of Hadley agreed.

At the beginning of January 1684, Smith suffered fits of delirium and extreme pain. Smith was even able to blame Mary for his condition as he writhed in pain, dying. Strange occurrences started to happen by his deathbed, medicine bottles were found empty with no explanation, unexplained scratching was heard, witnesses even stated they saw the bed on fire.

After Smith passed, his corpse was swollen and bruised. He died on Saturday morning, but his body was still warm Sunday evening. On Monday his face was discolored with blood running down his cheek. Finally, people heard strange noises and disembodied voices coming from the room where his body lay.

The people of Hadley wholeheartedly believed that ‘disturbing’ Mary would ease Smith’s pain. So they went after her. Thomas Hutchinson, in his book ‘History of the Massachusetts Bay Colony’ described what the townsfolk did to Mary.

“While Smith lay ill, a number of brisk lads tried an experiment upon the old woman.  Having dragged her out of the house, they hung her up until she was near dead, let her down, rolled her sometime in the snow, and at last buried her in it, and there left her; but it happened that she survived, and the melancholy man died.”

Mary Webster lived another 11 years after surviving her hanging, but the townspeople took her survival as a sign of being a witch and continued to disturb her for the rest of her life. In 1985, Margaret Atwood dedicated her novel ‘The Handmaid’s Tale’ to Mary Webster, her ancestor.