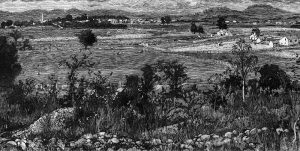 The Lotz House (Lotz rhymes with boats) is a two-story home built in central Tennessee in the little town of Franklin. The home was constructed in 1858 and is a significant site as it was at the epicenter of the Battle of Franklin during the American Civil War in 1864. The home is now a museum that not only houses the stories and artifacts of this tragic time in American history, but also the phantoms of the battle’s past. Want to experience Tennesee’s phantoms for yourself? Join us for a ghost tour in the Music City?

Johann Albert Lotz was a German immigrant who purchased five acres of land from Fountain Branch Carter. Lotz was a classically trained master woodworker and completed the building of his home just three years later. The home served as a ‘show house’ to demonstrate his carpentry skills and to hopefully bring new clients to his business.

The Lotz House has three fireplaces with mantles that truly impress. All of them are carved from three different kinds of wood and in addition, the home has a free-floating, black walnut wrap-around handrail and cantilevered staircase. To accomplish such a feat in the mid-19th-century is remarkable. Even more, a post at the bottom of the staircase is actually an inverted leg of one of Mr. Lotz’s pianos, which he built as well. All of the carved finials, millwork, and architecture were designed and constructed by Lotz. As one can see, the home meant a lot to Lotz and was a labor of love.

The Lotz family had a set of twins and a daughter named Matilda, who was known for her artistic skill and creative tendencies. A long time after the Battle of Franklin, Matilda further studied her art in Paris and was even awarded two gold medals by the Paris Academy of Painting, the first woman to ever be honored by the academy. Matilda traveled extensively in Europe and Egypt, which was an oddity at the time, as single unchaperoned women generally did not leave their homes. Matilda lived a unique and noteworthy life, but passed away in Tata, Hungary in 1923.

The Battle of Franklin

In early 1864, the Union Army was expecting a Confederate attack at some point and began to mobilize large numbers of soldiers in the general area of the Lotz house. Union soldiers did their very best to create defensive fortifications and cut down all of the trees in the area to prevent being surprised by Confederate snipers. They also were said to have poisoned the area’s water supply. The Lotz twins, Julius and Julia, were said to have been out to play that day for the last time — they are thought to have been killed by the poisoned water during their day. Others say they drowned in the river.

On the day of the battle, the Lotz family was surprised by an endless stream of troops in wagons passing in front of their home. They became nervous, realizing that something intense was about to happen. From their front yard around two that afternoon, they could see a tidal wave of countless brown and grey uniforms — a Confederate attack was imminent. They took refuge in the cellar of their neighbors, the Carters, because their home was made from wood and was insufficient shelter for the spray of bullets that would soon erupt. The battle raged on for five hours while the Carter and Lotz family hunkered down in the cellar, terrified, the echoes of bullets and screams in their ears.

The Battle of Franklin is considered one of the bloodiest battles in Civil War history. When the noise stopped, the families emerged from their underground haven and were met with a scene straight out of a horror movie. The area was a wasteland, hundreds of bodies six-feet-deep and seventeen dead horses were lying in the Lotz yard. Six Confederate generals also lay dead or dying. The Lotz house was still standing, damaged terribly. The south wall of the home was completely gone, blasted into oblivion by cannonballs. Burns from these cannons can be seen inside the house today. The home became a field hospital after the battle, and more soldiers passed away inside of the home, succumbing to their wounds.

The official Lotz Museum website stated the following about the Battle of Franklin:

“The house, which has been on the National Historic Register since 1976 is located in the heart of downtown historic Franklin, Tennessee at “ground zero” of the Battle of Franklin which was a pivotal battle in the American Civil War. On the night of November 29, 1864 approximately 25,000 Northern soldiers retreated from Spring Hill, Tennessee into Franklin, Tennessee.

These troops quickly dug protective trenches south of the Lotz House and waited to see if they would be attacked by the Confederate army. When the Lotz family awakened on the morning of November 30, in effect the Federal Line had been established in their front yard. Mr. Lotz, fearing that his family, his wife Margaretha, his sons Paul and Augustus and daughter Matilda would not survive the battle in their “wooden house,” they sought refuge 110 steps across the street in the brick basement of The Carter House. For 17 hours while the battle raged all around them, the Lotz along with 20 other people remained safe and survived.”

The Lotz family returned to their normal operations, although traumatized. Not far from the home is McGavock Confederate Cemetery, which contains the remains of about 1,481 soldiers — some of which are reported at the home today. The home has passed through plenty of hands and had more than just a few uses, but in 2008 it was opened as a historical museum for the public. The home is a popular destination for tourists due to its close proximity to the Franklin Battlefield and the Carnton Plantation.

Hauntings of the Lotz House

With all of the bloodshed that occurred here, it would be more surprising to learn that the Lotz house had no resident ghosts. But alas, it does. Everywhere, all over the property. Visitors to the museum report hearing war-like drum sounds coming from outside the home, only to assume it’s re-enacters. Most times, it’s not. Some have even heard the drums coming from inside the home, shaking the bones of the property with their volume.

One staff member tells of a time she was alone in the museum. As she was making her way through the home, she passed by the staircase and saw a woman at the top of the steps. She turned to face her, and the woman yelled, ‘where is Anne?1’ frantically. The employee couldn’t open her mouth fast enough to tell her the museum doesn’t have an Anne before the woman vanished into thin air.

Guests to the museum report disembodied voices and yells of men coming from outside the home. Could these be the echoes of screams of the soldiers in the midst of the Battle of Franklin? Some visitors say yes — not only do these screams occur at all hours of the day, but they are accompanied by unexplained shadows and semi-sheer apparitions of men in Civil War garb creeping around the outside of the museum. Have you ever visited the Lotz House? Did you hear any unexplained drums or cannonfire?

For another haunted house-turned-museum, check out our article on Liberty Hall in Kentucky!