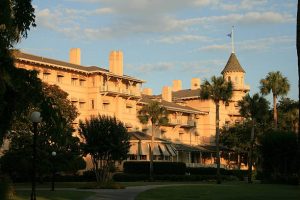 A southern gem, Jekyll Island has a long and storied history that began back with its colonization in 1733. General James Oglethorpe, who founded the colony of Georgia, named Jekyll Island in honor of Sir Joseph Jekyll, his friend and financier from England. The island and the Jekyll Island Club have seen more than their fair share of historic importance and a number of spirits from the past still call the island home.

Georgia is considered one of America’s most haunted states, and our Savannah ghost tour will prove that!

The Jekyll Island Club was a private club on Jekyll Island, which is located on Georgia’s Atlantic coast. It was founded in 1886 when members of a hunting and recreational club purchased the entire island for $125,000, or $3.1 million dollars by today’s standards)

The original design of the Jekyll Island clubhouse was completed in the beginning of 1888, with its turret being the signature design feature. The club thrived through the entirety of the 20th century, and its members were those from the world’s wealthiest families. Think the Rockefellers, Vanderbilts, and Morgans.

The club was unique, with hunting at the forefront of the recreation provided to guests. A gamekeeper was even hired to keep Jekyll Island well sticked with oheasants, turkeys, deer, and quail for the hunting pleasure of members. All members were to report daily what they had hunted and to turn it over to the club. Wild game was a common sight on the menu of the club restaurant, and a taxidermist shop was even located within the club compound so that members could preserve their trophies.

As the club grew larger, other recreations became popular. Golf eventually took over as the club’s dominant sport, with a brand new ocean-side course being constructed in the 1920s. A portion of this historic course is still intact.

The Great Depression of 1929 caused extreme changes on Jekyll Island. The depression not only devastated the poor, but hit the wealthy as well. Membership to such an exclusive club became an extravagence that many could no longer afford. Membership dropped slowly over the course of the depression, and the executiv committee decided to create a new level of club membership to try and reel in new members from ‘lower’ classes. The associate membership was designed to fit the pocketbooks of anyone. It revitalized the clb for a short while, but once WWII started, the Jekyll Island Club finally crippled under the strain the war had on the labor situation.

The Jekyll Island Club was called ‘the richest, most exclusive, and most inaccessible club in the world,’ which leads one to ponder if the spirits of the members would ever want to leave this rich, island paradise. Perhaps they haven’t — read on below to learn which members stuck around in the afterlife!

The haunting history of the club starts with its original founder. General Lloyd Aspinwall, a founding member of the club, died unexpectedly on September 4th, 1886, more than a year before the club was to officially open. He was supposed to be the club’s first president. Letters dated from just a few years after report visions of the General walking the verandas at dusk, but only on September 4th. Today, that veranda is a sunroom named after the General, The Aspinwall Room.

Guests to the hotel have been truly surprised to find their coffee had been sipped on and their morning paper unfolded. It is said that each morning at the club, the president of the Southern Railroad Company, Samuel Spencer, insisted that the Wall Street Journal be delivered to his room. For years it was his ritual to drink a cup of coffee while scanning the day’s news. In 1906, his ritual came to an end when he was killed tragically in a train accident. For years now, guests who stay in Spencer’s room find their newspapers and cups of joe disturbed, leading guests to believe that Spencer has continued his morning ritual into the afterlife.

More than one guest has inquired about the strange bellman at the hotel. He is described as being dressed in a suit and cap of days past. He delivers freshly pressed suits to soon-to-be-grooms and has mostly been seen on the 2nd floor, knocking ever-so-gently on guestrooms to announce his deliveries.

J. Pierpont Morgan was one of three members who built the summer homes on the island. He and his family used to vacation in one of the three story units. The third story had a gorgeous porch that offered Morgan a fantastic view of the Jekyll River. He described this as his favorite place to ‘have a quiet time of reflection.’

Morgan’s spirit still enjoys watching the waters of the Jekyll River flow, while smoking his favorite brand of cigar. Guests who stay in this condo and rise early enough for the sunrise are treated to the smell of his cigar smoke. Some even report seeing an apparition of a man in their room that disappears just as they notice him.

The Island’s Most Famous Haunt

In 1917, Edwin Gould’s son, Edwin Gould Jr. was hunting with a friend near Latham Hammock, where the Jekyll toolbooth stands today. He found a raccoon in one of his traps and not wanting to ruin the skin with his buckshot, he used the butt of his shotgun to finish the job. The gun went off accidentally, shooting Eddie Jr. in the lower abdomen. He later succumbed to his wounds. His family was so overcome with grief that they abandoned their cottage on the island. Today, all that remains of the cottage are entrance steps guarded by two stone lions. A whiff of the tragedy lives on at another cottage on the island. Eddie’s grandmother resided at another cottage, and he was known to bring her roses every now and again. These days around dusk, visitors can smell roses around the Cherokee Cottage, as if Eddie Jr. is posthumously proving his love to his grandmother every day.

In the DuBignon Cemetery, named after the family that owned Jekyll from 1790 to 1886 lies the graves of more than a couple of island dwellers. The graveyard only houses five graves — three are brick and marble, dedicated to the members of the DuBignon family, Anne, Marie Anne, and Joseph. Two smaller headstone stand quietly in the very back of the graveyard, hidden behind two evergreens. The stones mark the burial sites of two former hotel employees who drowned during a day of swimming in 1912. Several photos have been taken in the cemetery that show strange orbs floating about the yard. (For another haunted Georgia cemetery, check out our article about the Bonaventure Cemetery here)

A story from 1910 centers around a man named William Hart, an assistant superintendent in charge of maintaining and protecting the island’s wildlife for the hunters. Hart was patrolling the beach when he came upon two poachers stealing turtle eggs, a valuable commodity. Hart confronted the men and ended up with a deadly gunshot wound. His spirit is still said to patrol Driftwood Beach in the early hours, with his spectral footsteps being washed away by the beach’s waves.

For every single story there are countless others that haven’t been recorded. Happenings can occur for a mere instant, later to be forgotten or explained away. To truly understand the extent of the hauntings at the Jekyll Club Hotel, one would have to visit for themselves and experience the exclusivity that the club once provided to the nation’s heirs and heiresses. Perhaps you’ll even cross paths with one of these former members, a trail of expensive cigar smoke the only tell-tale sign that you’re never truly alone here.

Did you know? in 1747, William Horton purchased a large copper pot and began brewing beer on Jekyll Island at what would become recognized as the states first brewery!

For more on another famous haunted resort, check out our article about Lake George’s Sagamore here!