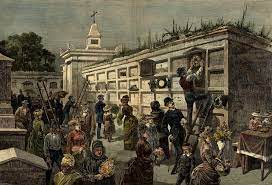 The cemetery is just one block away from the famed French Quarter, and has been in continuous use since its foundation. The St. Louis Cemetery is, to this day, the most visited burying site in all of the New Orleans metro area. Claimed to be the oldest cemetery in New Orleans, this is only partially true. Since it replaced St. Peter Cemetery, which still lies below the colorful houses of the French Quarter, it is actually the second-oldest. Many coffins of the St. Peter Cemetery remain under the paved streets, as evidenced in 2011 when fifteen waterlogged coffins were excavated from someone’s backyard…

A Bit on St. Peter’s Cemetery

“From the period of 1725 to the 1780s, St. Peter Street Cemetery held the city’s dead in below-ground graves. Soon enough, capacity grew limited, partly due to a growing population and also because New Orleans was disease-ridden and there was not enough room to hold the mounting number of dead. The Cabildo, the Spanish governing consul, closed the cemetery and set about surveying a new parcel of land. Spanish Governor Esteban Miro had demands, however, that would ultimately shape the culture and fabric of death in the Crescent City.

The Spanish consul mandated that all new cemeteries were to be located at a distance from the French Quarter. That the dead might infect the living was a tremulous fear that worried most citizens during this period, and the Cabildo ruled that all forthcoming burial sites were to be placed in the swamp. Naturally, thanks to the city’s high water table, flooding was a subsequent problem to Miro’s ordinance. But solid land was precious to early New Orleanians, where the French Quarter might as well have been an island surrounded by swamps. Above-ground tombs were the solution: with multiple of generations fitting into one tomb, land was saved for city development. Many argue that it was due to Governor Miro’s Spanish heritage, in addition the ruling Spanish Cabildo, that influenced the architecture and the use of tombs and crypts in New Orleans as it was Spanish custom.“

In the beginning years of St. Louis Cemetery, gravesites were unplanned, laid out in a disorganized way. This gave the cemetery at maze-like feel, until the dead were finally organized by religion and heritage. Catholic, non-Catholic, Protestant, and ‘Negroes’ which referred to slaves of the area and not the city’s freed African American population.

The St. Louis Cemetery remains one of the most premier burial sites in the state. At $40,000 per burial plot, famous and infamous people from all around the world have requested to be interred on this sacred ground.

The cemetery has been closed to the general public due to increasing rates of vandalism. Families who own tombs can apply for passes to visit. St. Louis Cemeteries Nos. 2 and 3 are just as exclusive, and house some of the city’s most famous names as well, including notable jazz musicians Danny Barker and Ernie K. Doe, Venerable Mother Henriette DeLille, who is also a candidate for sainthood, as well as other politicians, civil rights activists and soldiers. Are any of the dead still reported today? Keep reading to find out!

As the ‘oldest’ cemetery in New Orleans and with over 100,000 bodies interred here, St. Louis Cemetery doesn’t fall short when it comes to strange occurrences and reports of ghostly activity.

One of the most famous, and perhaps the biggest reason people visit the St. Louis Cemetery is to visit the grave of Voodoo priestess Marie Laveau. Marie was born to a Creole mother and a white father. As she grew up, her beauty and talents as a hairdresser were recognized all over town. Laveau had learned about natural and herbal remedies that serviced the rich and famous of her time. Although she was well-known for the magic she worked on hair, she was also famous for her Voodoo practices. She was known as a kind and helpful woman who used her Voodoo to help others and was loved by her community.

Marie passed away in 1881 at the age of 80 in her home. Her funeral was lavish with countless townspeople coming to mourn her passing. However, after her death, her apparition was still seen all over the town.

Even her tomb has a famous story attached to it. It is said that when visiting her grave you can still spot three X’s on the stone. These are said to be left by people who were requesting Marie’s help after her death. The story states that if you place an X on her tomb, turn around three times, knock on the tomb and yell out your wish, your request will be granted. If your request was granted, you were to come back, circle the X and place an offering of gratitude for her assistance.

Although Marie was known for her love and kindness in life, guests of the cemetery who voice their disbelief of her religion and Voodoo practices have reportedly been pushed, scratched, and thrown to the ground. Others have seen her walking around the cemetery before vanishing.

Another site that is of particular interest to visitors is that of the sailor Henry Vignes. He lived as a nomad until going to a boarding house in New Orleans. Vignes kept important paperwork with him, which included information on his family’s tombs, and asked the owner of the boarding house to keep the papers safe for him while he was gone out at sea.

While he was away, the owner of the house sold the tombs and left Vignes with no family plots. He was said to try and fix the issue when he got back, but ended up falling ill shortly after his return. He died shortly after and since he had no family plots, he was buried in an unmarked grave in St. Louis Cemetery No. 1.

Visitors of the cemetery today tell of a strange man with blue eyes that asks where the Vignes tomb is, and many others have reported hearing a disembodied voice yell ‘I need rest!’ Could this be the spirit of Henry Vignes, restless due to his unmarked grave?

One of the most mysterious hauntings of the cemetery is that of a man named Alphonse. His earthly story is not well-known, and much of his life was not recorded. He is very much recognized in the cemetery, however. Visitors report having a man take their hand and ask them to bring him home. He’s also seen walking about the cemetery and picking flowers from other people’s tombs and placing them on his own. Many people believe that this is a sign that he was never properly mourned, or that his death was not natural and he steals flowers as a form of justice.

The circumstances surrounding his death are muddied, but it is believed that he was murdered by a member of the Pinead family. When visitors step close to the Pinead family tomb, they hear a man tell them to ‘stay away.’

With the high number of typical ghost sightings, it’s easy to see why so many people flock to New Orleans to visit this haunted cemetery. From the Voodoo Queen to the lonely Alphonse, some ghosts are just looking for a home or a place to rest. Whether you are looking for a historical or ghostly experience by going to the St .Louis Cemetery, you will likely get to see some unexpected ghoulish guests.