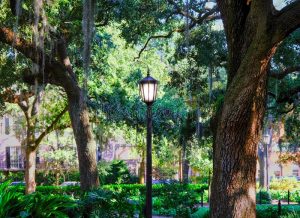 One house in Savannah’s historic district has stuck out, time and time again. With horrifying tales of its past, 432 Abercorn Street has become more and more foreboding with each retelling of every story. The house is the subject of countless rumors, a dark history, and draws visitors from all over the country into its grasp. What happened at this house that has awarded it the name ‘Most Haunted House in Savannah?’

The tumultuous tale of 432 Abercorn begins in the year 1868, when the ground was first broken to build the home. The ground here should have never been built upon, as the land was home to a burial site for enslaved people of the time. Building a home on top of a burial ground filled with the bodies of souls who suffered slavery? Truly a recipe for disaster.

But, in Savannah, building atop burial grounds was almost unavoidable, as most of the land acted as ancient burial grounds used by Native cultures and enslaved African people. The whole city is filled with bodies of the dead, forgotten graveyards, and the rumor that Savannah itself is a cursed city — leading to war involvement, disease outbreak and death.

Countless people in Savannah have died as a result of the supposed curse, and their departed souls are left to wander the city’s land for eternity.

The area around 432 Abercorn is known as Calhoun Square, and is a hotbed for ghostly happenings. Some even consider Calhoun to be the most haunted spot in Georgia, ground-zero for the curse of Savannah. Calhoun Square has bore witness to murders, suicides and disappearances not seen in other parts of the city, leaving it stained with the blood of souls of the past — a misery and darkness unshakable.

Visitors to Calhoun Square report the feeling of dread and anguish, the entirety of its atmosphere filled with a heavy sorrow.

The street that follows alongside infamous Calhoun Square is, you guessed it, Abercorn Street. Abercorn is home to more than just one haunted house, specifically the Andrew Low House. Without question, however, 432 Abercorn is the most well-known.

Construction of the home was completed in 1869, and Benjamin Wilson and his family moved in straightaway. Benjamin Wilson was a veteran of the American Civil War with ambitions to climb to the top rung of the Savannah social ladder. The home was one of the most expensive in all of Georgia at the time, with a value of $20,000.

Shortly after the Wilson family moved in, Mr. Wilson’s wife passed away, claimed by Yellow Fever. Mr. Wilson fell into a deep despair, but held it together for his family. His grief turned into strictness with his children, and many claimed he was too overbearing.

From this point on, the history about 432 Abercorn is hazy. The home is surrounded by rumor, urban legend, and a lack of historical records. One story revolves around Benjamin Wilson himself.

The story of Mr. Wilson and the way he treated his children after his wife died has no substantial records, a tale based off of nothing but whispered rumors. Nonetheless, the story may hold some historical fact — although how deep that fact goes in unknown. According to reports, Mr. Wilson’s punishments went beyond spanking, they were said to be cruel and downright inhumane.

The story begins quite innocently, with Mr. Wilson’s daughter was seen playing with students of Savannah’s Massie School, a school whose population was mainly orphans and African-American students. Mr. Wilson was displeased with this, and disapproved of his daughter interacting with kids of a ‘lower class.’

When she arrived home that day, she was berated and screamed at until Mr. Wilson thought his message was received. She ignored him, a girl ahead of her time. The next day she went back to play with her Massie School friends. It wasn’t too long before Mr. Wilson found out and started to formulate a punishment for his daughter.

He is said to have taken a chair and placed it in front of a window that overlooked the Massie School grounds. He then dragged his daughter to the chair, tying her wrists and ankles, trapping her in the chair. She cried and screamed to no avail.

He left her tied there for days to watch her friends play without her, ignoring her cries and leaving her to bear the heat of one of Savannah’s hottest heatwaves, her body roasting in her room.

It is said that she was imprisoned for several days up in that chair. When Mr. Wilson finally entered the room to free her, he untied her from the chair and she fell to his feet, lifeless. He had killed his own daughter.

No charges were ever filed against Mr. Wilson, as his standing in society protected him. His crime was swept under the rug, with no reports ever being made in any newspapers. Mr. Wilson couldn’t forgive himself for what he had done — he was so distraught knowing he was capable of such a heinous act.

Mr. Wilson wasn’t the only one who couldn’t forgive himself. His daughter’s spirit is said to have remained in the home, tormenting her father, serving as a constant reminder of what he did. A week of this haunting had gone by before it was too much for Mr. Wilson to bear. He trudged up the stairs to his daughters room, revolver in hand. The chair his daughter died in still faced the window. He sat down, rose the gun to his head and pulled the trigger — ending his own life in the same place he ended his daughter’s.

A horrible story, the makings for a dark urban legend that has survived for years. The truth is, Mr. Wilson did not commit suicide at the home. He passed away in 1896 in Colorado. He did have two daughters, but neither of them died in the Abercorn home. So, how in the world did this rumor come to be? Perhaps Mr. Wilson was abusive to his kids which led to rumors around the Square.

Another haunting tale told of the home is that of a triple homicide. It was the early 60s when a husband and wife were living in the home with their two daughters. Around the holiday season, the couple invited some friends to stay at their home with their own two daughters in tow. During the evenings, the children would be left at home alone without any supervision while the adults went out on the town. When they arrived home, they were met with a sight that they couldn’t soon forget.

When they entered the home, it was eerily quiet. They entered the children’s room to discover three of the girls viciously murdered. Their bodies were bloodied, the fourth child was later found in a closet, frozen in fear.

Some say that the current owner of the home is the survivor of the night and that she believes the house is cursed. She doesn’t even live in the home, but vows to keep it unoccupied for as long as she lives.

Other rumors exist of the Abercorn home, with one tale including demons transporting a student of the Savannah College of Art, never to be seen again.

Visitors to the home report negative energy surrounding it. Others claim to have captured shadowy figures in photos of the windows. Who or what haunts this home? What truth lies behind the stories of the home? The home itself is completely sealed in secrecy, so the truth may never, ever come out.