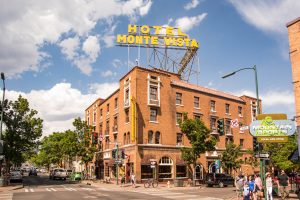 Something about the west just lures hauntings. It’s almost as if every city in Arizona is home to a haunted hotel or inn. Flagstaff is no different. The Hotel Monte Vista has been an icon of the city for close to ninety years. It’s had quite the lively history, and that energy lives on in the building to this day.

Looking to experience the spirits of the western desert for yourself? Join us for a Las Vegas ghost tour and experience sin city like never before.

The Hotel Monte Vista was built in 1927 and was funded by taxpayers. It was one of the only hotels in America that was publicly owned at that time. Hotel Monte Vista was built off of America’s historic Route 66 and sits near a railroad station — this made it a prime location for those just passing through and for all types of travelers at the time.

Early on, the hotel made a name for itself in show business. It was home to America’s first radio show hosted by a woman which was run by Mary Costigan. It later became the hotel of choice for actors needing lodging during the western movie craze of the 1940s and 1950s. Big names like John Wayne and Bing Crosby stayed at the hotel during their heydays. John Wayne actually reported the first ghostly sighting in the Hotel Monte Vista in the late 1950s. He described the spirit as a friendly one who visited him in his room. He didn’t seem too afraid, but a ghoul appearing in your otherwise empty room is sure to stir up some frightened feelings!

The Hotel Monte Vista’s hauntings stem from an almost century-long history and the eclectic characters that came through its doors throughout all of those years. Perhaps the energy comes from the bank robber who was found dead in the hotel’s bar, or maybe it was the constant fights and shootouts. Could it have been because of the strange man who used to hang meat from his chandelier and was found dead in his room two days later? The two sex workers murdered and thrown from the third story window surely left a dark imprint on the property. The list goes on — the underground tunnels, the violence.

In the 1920s, tourism in Arizona was flourishing, and the city of Flagstaff had very little options for lodging. The city then passed a municipal ordinance that created a bond to raise money for a new hotel in 1924. The city raised over $200,000 to build the hotel and was finally completed in 1927 — opening on New Year’s Day.

Originally called the Community Hotel to honor those who donated to build it, the hotel had seventy-six rooms, a two-story lounge and var a post office, a newspaper headquarters, and even its own radio show. Mary Costigan ran her show in room 105 for three hours a day. The Community Hotel quickly became the city’s hotspot and the staff decided a new name was in order for the newfound success of the hotel. The hotel ran a contest, which was won by a twelve-year-old girl who gave the hotel its current name, Monte Vista.

When Prohibition reared its head in the 1930s, all bars in and around Flagstaff were ordered to close. The Hotel Monte Vista was known for its rowdiness and kept serving alcohol — becoming a speakeasy. It was hardly kept secret, and the hotel’s clandestine bar was shit down in 1931. With the loss of the alcohol, the hotel opened up with slot machines to keep customers coming back. The story tells that the tunnels underneath Flagstaff and the hotel were used to smuggle moonshine, host illegal card games and even served as an opium den and brothel.

During the western movie craze of the 1940s and 1950s, western-style films were continually being shot in nearby Oak Creek Canyon and Sedona. Actors and celebrities found respite at the Hotel Monte Vista to relax after shoots. A scene from Casablanca was even filmed inside of the hotel. Gary Cooper, John Wayne, Humphrey Bogart, Bing Crosby and Spencer Tracy all stayed at the hotel during its tenure.

The Hotel Monte Vista was rife with poker games, bar fights, shootouts, and outlaws on the run. In the 1970s, a group of bank robbers hid out at the hotel after a robbery. One of them was shot in the process, and made it back to the hotel even with his wounds. The man succumbed to his wounds in the hotel bar before he even had a chance to sip his drink.

Haunts of the Hotel Monte Vista

Over its ninety-year operation, spirits have made themselves at home at the hotel. One of the most reported is the ghost of the bank robber that perished in the bar. He’s seen as a half-bodied apparition ‘standing’ at the bar. He greets bar managers and guests often report feelings of being watched. Though its believed that the spirit is that of the bank robber, many believe since so many shootouts happened at the bar that it could be one of several gunslinging outlaws.

In the early 1930s, a man brought two women of the night back with him to the hotel Monte Vista to room 306. Before the night was over, the two women were dead and their bodies were thrown from the window. Guests who stay in room 306 report feeling the presence of the two ladies, who hold a grudge against any men who stay in the room. Men specifically report feelings of being watched and some have even had dreams of being strangled, perhaps reliving the night of the murders from the women’s perspective.

The second floor of the hotel is home to the most unexplainable phenomena. In room 410, a phantom bellboy knocks on doors unannounced. Room 220 was home to a long-term guest of the hotel who had a strange habit of hanging meat from the chandelier. His body was found one morning by a housekeeper after several days. Room 220 is now known for unusual noises, coughing, laughter, and full-blown disembodied conversations. A maintenance man who was making repairs in the room came back to find the television turned on with its volume all the way up — after he had turned off all electric and even locked the door behind him.

A crying baby is reported in the basement, but no one knows the story behind this phenomena. Some locals believe that a prostitute had gotten pregnant and was forced to kill her newborn in the tunnels of the hotel. Guests and staff who find themselves in the basement report hearing the baby’s cry, and a woman’s wail alongside it.

Another spookier apparition is that of the shadow man. He’s a tall, menacing figure who appears to people near the basement. His identity was never figured out, but guests report feeling terrified whenever he shows up.

Phantom footsteps follow guests down the hallways, disembodied voices whisper in the ears of bar patrons, and spirits are known to move furniture around in empty rooms. The hotel staff have learned to live with the spirits and consider it a running gag.

As a place with more than just a bit of bloodshed, the western United States is home to all sorts of strange and unexplained happenings. Check out the haunted Old Tooele Hospital in Utah, or maybe meet the spirits of Nevada’s haunted deserts!